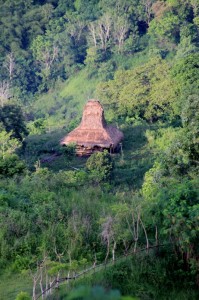 isolated house in the Wanokaka hills 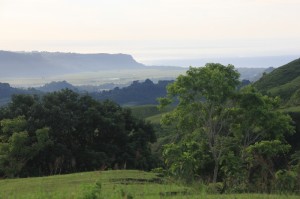 view of the Wanokaka area, along the river and the south coast

To the south of Waikabubak, stretching all the way to the coast and sporting some of the most beautiful beaches of Sumba, is the district of Wanakoka. There are no large towns here – large being relative, of course, there are in fact no really large towns in entire Sumba island -, but plenty of attractive traditional villages, all with their conical thatched roof houses and large tombs, yet each with their own characteristics, their own unique atmosphere. 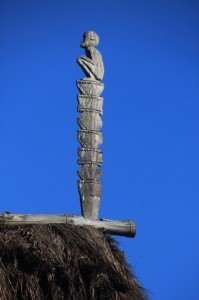 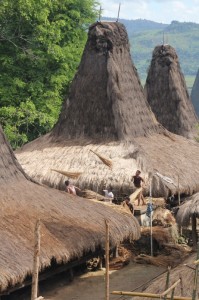 and roof repairs in Praigoli

Waigalli is very entrepreneurial, and villagers straight away get the stone and wood carvings out, stone still the limestone, although the village, other than so many others, is actually built on dark igneous rock that we haven’t seen earlier on Sumba – and which is obviously no good for carving. In Praigoli the villagers are all busy replacing the roof of one of the houses, a fascinating process, especially because the infallible precision with which some of the men manage to throw bunches of dried grass to those on the roof – they would probably do quite well in an American football team.

Not every village survives. Nearby Kampung Kadengar recently burned down by fire – apparently caused by kids cooking (but many fires are the result of lightning, into the tall, thatched roofs). Despite this having been the third time in living memory, or so I have been told, the villagers do intend to rebuilt the place, but are awaiting sufficient funds, and a big ceremony at an austere date – where no doubt a significant part of those funds will be burnt, figuratively in this case.

Interestingly, it also appears that some villages are, in fact, no-go area for some or another reason, and it remains unclear why exactly –but our guide is adamant we cannot go there. Tahu (?) village, for instance, looks a very attractive kampung, tightly packed together on a hill top, but according to our guide is off-limits. Sodo (?), another attractive village on a hill in the distance, can be visited, but with more time, perhaps a full day exercise. 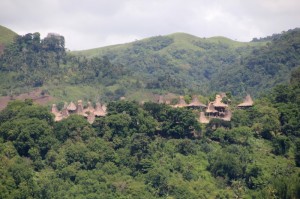 Sodo village, on a distant hill 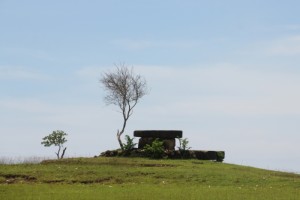 a tomb on the Hobakala pasola field 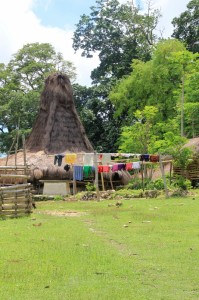 the village and the laundry of Motodawu

A little further west is the Lamboya area, another district, or sub-district. This is where the Hobakala pasola field is, a vast stretch of land where one of the five or six annual mock-battles on horseback is being held in February or March. The Pasola is a ritual festival, by different sources attributed to celebrating the harvest, blessing the new rice growing season, or simply the recreation of an ancient fight between villages over the girl. The idea is to throw spears at the opposite team, and preferably draw some blood, which is supposed to fertilize the fields. The terrain comes complete with the stands, and in Hobakala also with tombs, right in the middle of the field, allegedly of people who didn’t survive the pasola – but possibly also tombs of important priests. It is December when we are here, too early for the pasola.

Of the several beaches we hit, Marusi beach, reputedly the nicest beach in South West Sumba is indeed a very nice place, but also favourite with the sand flies! The more lively beach is Wanokaka, where a river, or perhaps one of the channels of a delta, flows into the sea, creating a natural shelter for fishing boats. Many have been put on the beach, or a sand bank; others are actually doing something, fishing offshore. And with results, witness a fisherman cleaning his catch prior to bringing it by motorbike to the market in Waikabubak. Where he is not the only one!

For those really interested, below is the virtual tour, with a little more text, and many more photos, of the various attractions in the Wanokaka region. A link at the end of each entry takes you to the next. 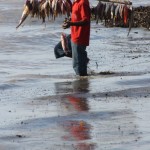 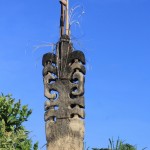 The first village south of Waikabubak is Kampung Waigalli, a traditional village with a good arts and crafts collection, located just uphill from perhaps the nicest, and certainly the most active beach area, Wanokaka Beach, with lots of fisherman’s activity onshore and offshore. 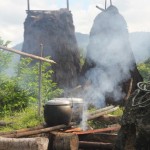 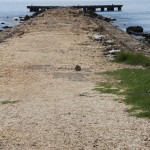 Praigoli, and its neighbour Waiwuli, and two other attractive kampungs in the Wanokaka hills, with actual roof building on display, and fabulous views. Downhill, once again, is Rua Beach, a rather abandoned place. 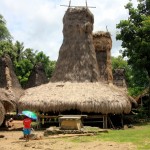 One of most famous Pasola fields in South Sumba is Hobakala, also providing spectacular views of the surrounding countryside. A little further on are the villages of Motodawu and Tokahale, almost next to each other on the same hill. 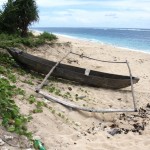 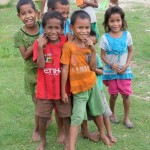 The nicest beach of South Sumba in Marusi Beach, and with quite a surf. The last village of the virtual tour is Waruwora, admittedly a bit more of the same, but nice enough in its own right. And that ends the tour! 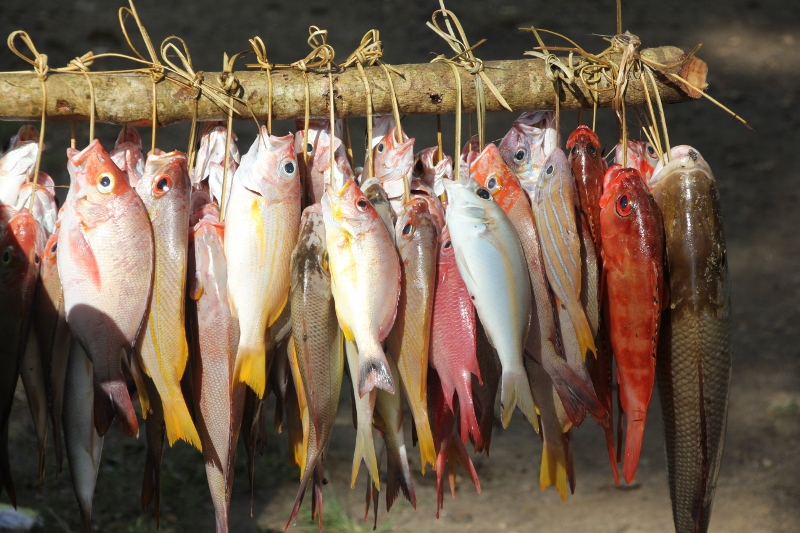 fish for transport to town