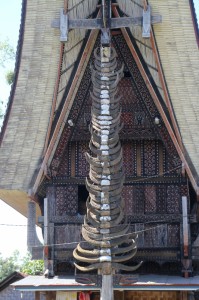 Another traditional village with tongkonans, close to Rantepao 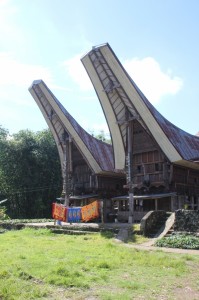 two of the tongkonans of Marante

The village of Marante is one of the most accessible, just six kilometers east of Rantepao, past the Bolu market and along to Palopo road. Despite this being one of the main through-faring roads in Sulawesi, there isn’t a lot of traffic, which makes it OK to walk.

Like so often, Marante is not one, but several compounds, mostly new houses, although we also came across an older house, still thatched roof covering a bamboo roof structure. The houses are situated opposite rows of rice barns, many more than there are houses, and generally a lot smaller. 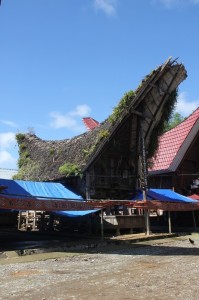 an old rice barn, one of the few still with a thatched roof 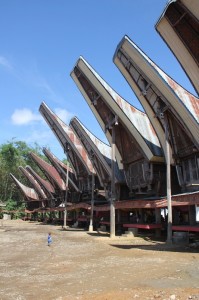 row of rice barns in Marante, neatly lined up the fighting cocks are being let out, in Marante – carefully tied to hooks in the ground to make sure they don’t attack each other 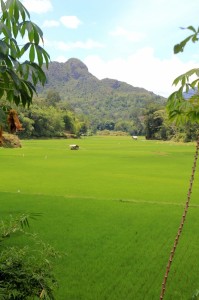 Around Marante, rice paddies and bamboo groves. There are several tracks that lead back to Rantepao, making for a nice half-day walk.

Further north, into the mountains, is Batutumonga (next stop on the virtual tour).

bull with huge horns, tied to a tongkonan