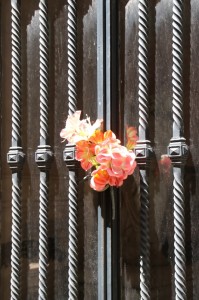 The oldest, and most famous cemetery in Argentina, but there are cracks appearing in the upper class facade.

The cemetery of Recoleta is where the wealthy Argentinean families put their dead to rest. The names on the tombs read like a street map of your average Argentinean town; the wealthy were also those who controlled the country – or maybe they became wealthy because they controlled the country – and they come back everywhere as Avenida Belgrano, Calle Sarmiento, Plaza Mitre or any other feature named after ex-presidents and another power brokers. There is a remarkable lack of originality with those responsible for town planning. 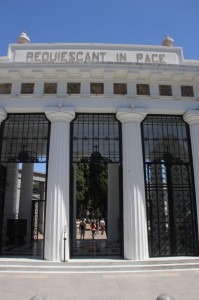 entrance to the Recoleta cemetery 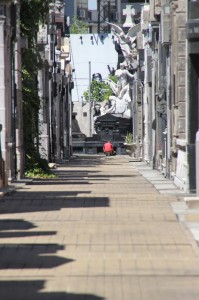 lonely gardener, or perhaps a family member, maintaining a grave

But back to Recoleta. You cannot just apply for a place here, and just money is not enough, you need to have the right connections to be buried in Recoleta. If the powers – I honestly don’t know exactly which powers, but it seems to be a closely controlled process – agree that your family belongs to those happy few of the Argentinean elite, you may buy a piece of land on the cemetery, and build a tomb for your loved ones that have passed away, or are about to pass away, or are likely to pass away at any time in the future. Some 6500 people have done so. A tomb is not for one person, usually they are for whole families. And often enough a tomb is not sufficient, what is needed is a mausoleum. Here is where you can display wealth, show off one last time, with sumptuous constructions, so that even after your death the battle for status continues. And they are indeed impressive, the marble structures, with the stained glass windows, bronze doors, the angels and saints, the cupolas. The many brass and copper plates remember the dead, on behalf of children, students, colleagues, and the often-present Jockey Club of Buenos Aires. To be fair, many represent real sorrow, parents who buried their daughter here, and daughters who buried their parents, with moving texts of loss and pain. But I cannot get away from the thought that quite a few plates here are for consumption of society, high society. 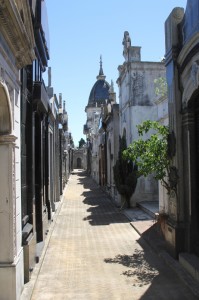 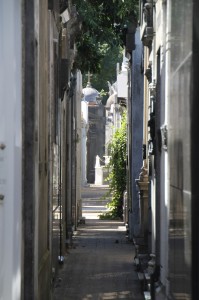 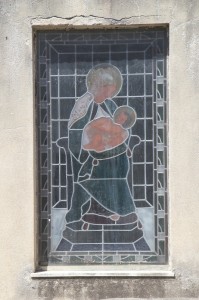 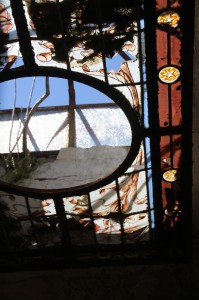 broken windows in the tomb ceiling

Yet, if you look more carefully, not everything is equally well under control for the rich. Quite a few tombs have broken doors, or glass roofs that have collapsed, perhaps from a storm, perhaps due to vandalism. Inside, a cross appears to be missing, or a brass plate – in Buenos Aires, like many other cities, soaring commodity prices have made any type of metal attractive to thieves, forcing for instance sculptures in town to be protected by fences, and even the grave sites are not spared, despite the Recoleta cemetery being closed at night. What is telling, though, is that much of the damage is not being repaired. Tombs that have glass broken, are left to the elements, and the wooden caskets inside are rotting away; filth is accumulating, rubbish is not being removed anymore. Perhaps the entire family has been buried by now, and there is nobody left to look after the grave? Or perhaps not, because some of the tombs, or the pieces of land they are built on, are for sale, the telephone number advertised on the door. 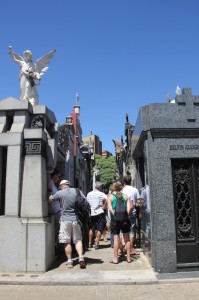 no need for signposting Evita’s tomb, the hordes of tourists will point the way 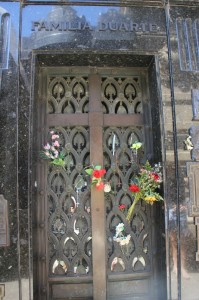 the tomb of Eva Peron 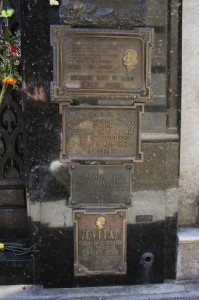 many well-wishing plates next to Eva’s tomb

There is one exception to the elite being buried here. The most famous Argentinean, Eva Duarte, better known as Evita, the charismatic second wife of Juan Peron, came from a humble family. The elite hate it that, after much debate, much moving of bodies, she got a place in Recoleta. But there is no denying that the tourists, who flock to this spot in great numbers, find her tomb the most inspiring, far more so than all those wealthy families that give their names to streets and towns. And the one tomb that always has fresh flowers, and always looks immaculate, is hers, thanks to the many Argentineans of other humble families that still adore her, more than 60 years after her death. 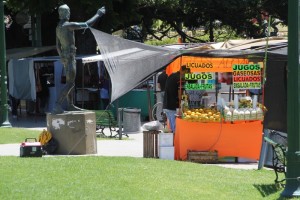 juice stall in the park outside the cemetery provides some colour