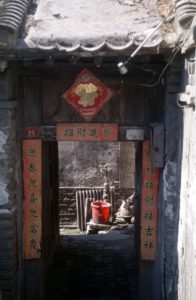 courtyard in one of the hutongs of Beijing

We lived a good three years in Beijing, from early 1997 to early 2000, and good years they were. From our comfortable apartment, just inside the Third Ringroad, it was walking distance to my office, and to the nearby restaurants and supermarkets, and a short taxi ride anywhere into town. The first time we went into town, we actually walked: our city map showed that it was only a few blocks to Tiananmen Square. Right! Blocks are huge, in Beijing, and in the end it took us close to an hour to get there. The first indication that everything in China is just an order of magnitude bigger…. 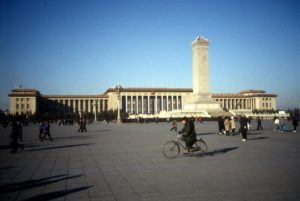 The thing to do in Tiananmen Square, apart from cueing up for the Forbidden Palace, or for Chairman Mao’s Memorial Hall, the thing to do is to fly kites – which is what every other Chinese, the young but also the old, does. Hundreds of kites were flying low and high above the square, simple self-made models as well as the most extravagant colourful dragons. Somehow the kite flyers managed to avoid each other’s strings, and everybody was just having a wonderful time. It turned out we were not the only tourists. On a Sunday afternoon, the square is also full of out-of-towners, Chinese peasants who have come to the big city for a family day out. Complete with picnic basket and blanket they slowly move across the square from one end to the other, eyes wide open not to miss any of this spectacle. Then they spotted us. Foreigners! They now started circling us, in ever smaller circles, until finally one of them had built up sufficient courage to ask if they may take a picture with us. 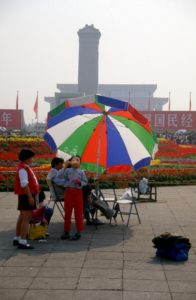 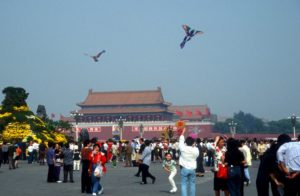 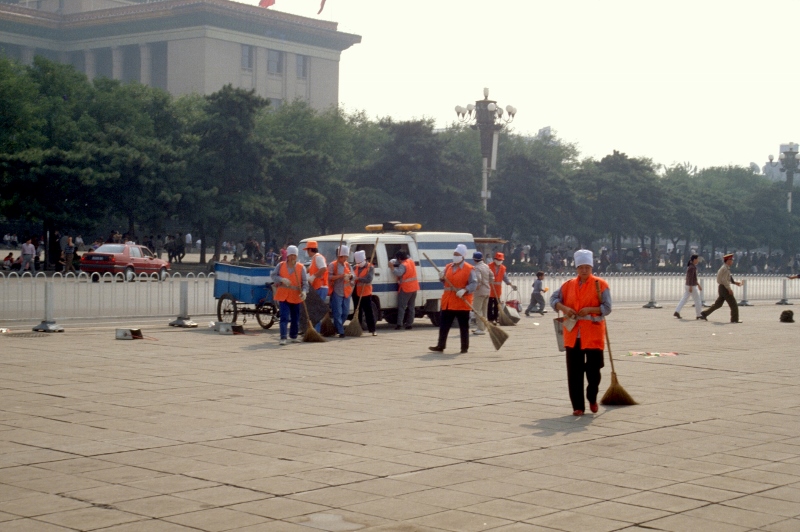 the square is regularly being swiped, for which a whole team is being mobilised

Opposite the entrance to the Forbidden City is Qianmen, an old city gate, but more importantly, also the location of the most famous Beijing restaurant, the “Duck place”, or Qianmen Quanjude Roast Duck in full. Photos of the world’s famous adorn the wall, all of them came to have their Peking roast duck here. And so did we, frequently, and not only here. Having said so, certainly in the beginning eating out was a bit of a challenge. Not having much interest for the Western hotels, we tried many of the small, hole-in-the-wall type restaurants of which there are thousands in Beijing. But without the proper command of the language, and without menu in English, selecting dishes wasn’t as straightforward as we had expected. In the end, we would wander through the restaurant with one of the waitresses in tow, looking at tables of other diners, and just select what looked appetizing. And more often than not, the Chinese were kind enough to offer us a few chopsticks and let us try the dish first! 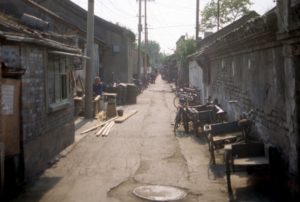 backstreet in one of Beijing’s hutongs 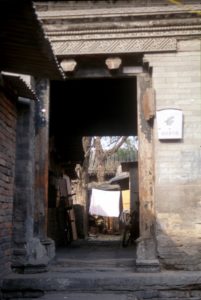 entrance to one of the hutong courtyards 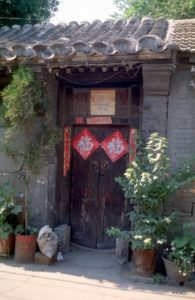 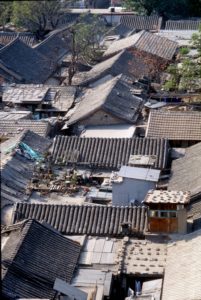 roofs of a hutong behind the drum tower 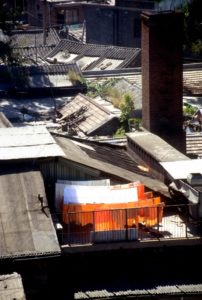 laundry drying on a balcony

Behind Tiananmen Square are the many of Beijing’s hutongs, the old neighbourhoods of courtyard houses, some big and comfortable, but many others much smaller, where people typically share the kitchens and the bathrooms, whilst occupying one or two rooms for the whole family. Many of the hutongs are fast disappearing, as the land in the centre of such a big city is far too valuable to house a couple of poor residences. The residents are being offered an apartment, with full amenities, in a highrise building away from the centre: difficult to refuse on account of the step-up in luxury, and perhaps also because in China it just isn’t easy to withstand official pressure. But in the late 1990’s there were still plenty of hutongs in Beijing, first and foremost Liulichang, a street full of antique shops that has been heavily restored, but also more authentic neighbourhoods in the vicinity of Liulichang, and near the Bell Tower and the Drum Tower north of the Forbidden City. They were great for a Sunday afternoon stroll, and they presented great photo opportunities! Combine this with a walk in the park, like the Beihai Park, and you cannot get more Chinese, on your Sunday. 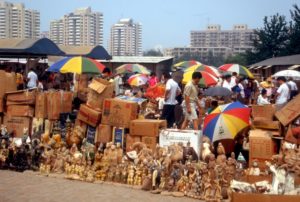 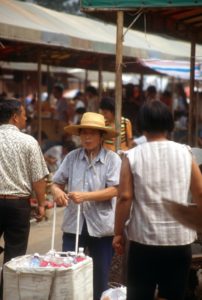 selling bottled water in the market 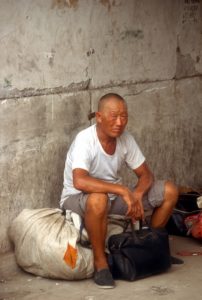 market seller with his ware tied up

Well, except that there is also Panjiayuan, the Sunday morning market – nowadays it is much more regulated, 7 days a week, with proper shops and all, but in the late 1990’s the market, popularly known as the ‘dirt market’, was mostly interesting on Sunday mornings, when the peasants from outside the city came to town with their emptied attics, or emptied barns. For the best pieces you had to be early, sort of 6 am, when trading started, and for the best bargains later in the morning, for the as yet unsold pieces that the people didn’t want to take back home anymore. Of course, in those days you also had the regular traders in the market, with their wares that were often just a little too expensive to be purchased as a souvenir, but at the same time too cheap to be anything like real antiques!

Apart from Panjiayuan, Beijing was in fact one big market, every day of the week. Street vendors would whisper ‘CD?’ when you walked past, and sure enough they carried an enormous hold-all full of illegally copied CDs and DVDs; those were the days that people still cared for CDs and DVDs. Others would spread a blanket on the pavement, anywhere really, and sell anything from Tupperware to fake Rolexes and underpants to kitchen utensils. They were always at the lookout, though, and they could easily pick up the four corners of the blanket, with everything inside, and disappear into the crowd as soon as the police appeared. In other places semi-permanent markets had sprung up. A big one was the so-called Russian Market, where rows and rows of stalls catered for Russian traders who came on the train from Moscow to buy garments. That these were specifically produced for the Russians, not the Chinese, was obvious from the sizes available!

Probably the most famous market was what was known as the ‘Silk Market’, in an alley opposite our apartment. This was where all sorts of clothing were being traded, some cheap, some branded, some real, some fake. Shopping here required a water pistol: the story went that only on a real Northface jacket water drops would not be absorbed, whilst on fake ones they would disappear inside in no time. With branded shirts and trousers it was much more difficult to distinguish which one was real, and had perhaps fallen of a truck, or was part of surplus production, and which one wasn’t. But sometimes the Chinese enthusiasm helped: my best find was a shirt with a Nike logo on the chest AND Adidas stripes on the sleeves. Real silk, too, was abundantly available, and comparatively cheap; tailors would turn it into anything you wanted, as long as you brought an example that could be copied.

Capitalism with Chinese characteristics, as the government would call it. Capitalism pur sang, as everybody else would have recognised.

next is: Beijing memories 2 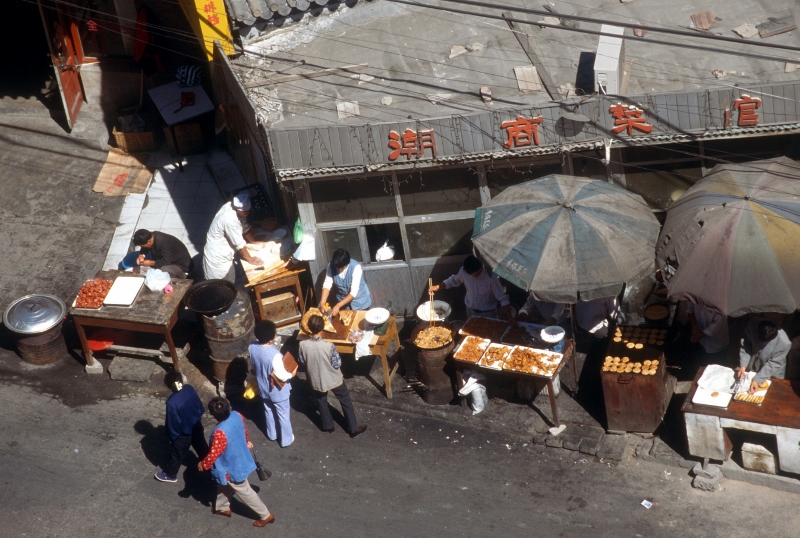 food stalls in one of the hutongs

One Response to Beijing memories (1)