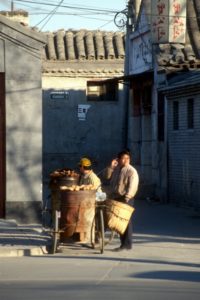 Beijing and the strugggle with its seasons

Beijing is one of those places with four distinct seasons. My favourite would be spring time, the nicest period in town, closely followed by autumn: pleasant temperatures, blue skies – or what get closest to blue, in one of the most polluted cities of the world. Summer could get very hot. Opposite our apartment would be one of those neon light boards recording the current temperature, which regularly hit the 39.9 oC. Never more, because at 40 the government was, apparently, obliged to close offices and factories and send all workers home. 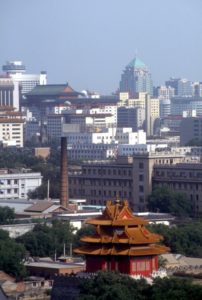 a temple, a chimney and residential highrise, all together in Beijing

But winter in Beijing conjures still my strongest memories. You knew that the winter was coming once you started smelling the roasted sweet potatoes. Come October, come an enormous quantity of carefully bicycle-mounted barbeque-turned barrels, which were being strategically located near street corners and bus stops. Simmering coals inside, and grill on top. These were the sweet potato men (and to a lesser extend the corn-on-the-cob men), and they took over small scale commerce for the months ahead. Quite nice, actually, the smell, although I have resisted tasting them. Somehow, the idea of these things roasting next to the busy streets, with all the cars and buses exhuming their foul smog, was not very appealing. Not in the least because another typical sight in the run up to winter was the many tricycles packed with coal briquettes, and these were not just being used for barbecues. Plenty small households still used coal for heating and cooking, and the average Chinese family started to build up his stock of coal well before the cold sets in. And not only small households. Despite the environmental awareness of the Chinese government – a lot of effort has been going into bringing natural gas to the city, from Central China – many factories and power plants had not been converted. Because Beijing had grown so rapidly, it wasn’t uncommon to find a factory chimney right in between high rise apartment buildings, making life on the top floors particularly unpleasant, I imagine. Still, improvements were noticeable, even in the time we lived there: the metro network opened, from a certain time onwards only lead-free petrol was available in the inner city, and the Miandis, the small, cheap mini-van taxis so common everywhere China, were banned in Beijing – which means: they were forcefully taken off the streets and incinerated. 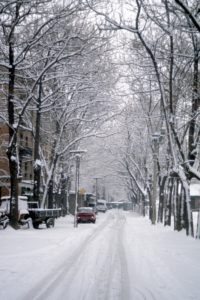 market stalls conitue their business, whatever the weather 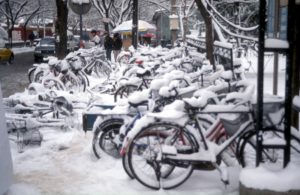 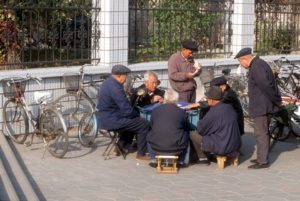 the Chinese men on the street 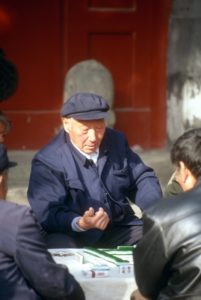 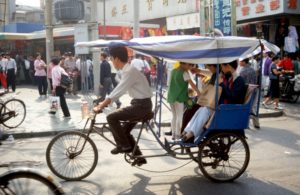 the most popular form of public transport in the late 1990s

Larger apartment buildings and offices had another heating regime. According to the Chinese government winter started at the 15th of November, and was officially over on March 15th, and those were the days from which the heating in all those buildings was switched on, and off again. And they were surprisingly close to reality: in all the winters I lived through in Beijing, it usually started snowing only a few days after – or before, of course – the November 15th. The waste was more at the end of the winter, where although sometimes it could still be bitterly cold at the beginning of April, often from mid-February onwards there were plenty of spells of quite nice weather, which was inside the heated apartment only bearable if you would open all the windows as wide as possible. 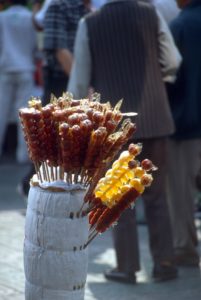 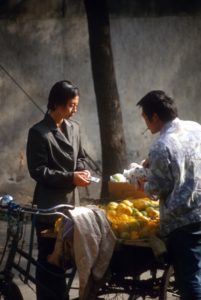 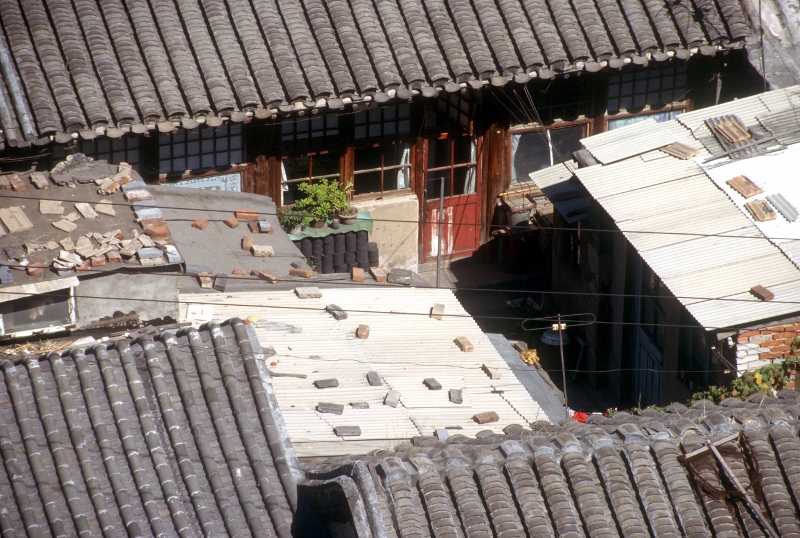 inner courtyard and hutong roofs in Beijing; note the coal briquettes next to the door