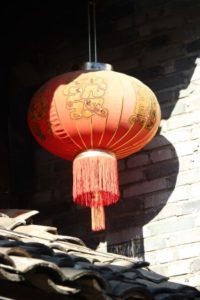 a red lantern decorating a house in Heshun

Of the various tourist spots we visited around Tengchong, like Heshun, most were underwhelming; the war cemetery was impressive, though, for a variety of reasons.

Heshun is a ‘beautiful old village’, ‘very quiet and slow-paced’, and ‘rustic’ (this is from a recent website entry, not my 20 year old travel guide), 5 km outside town. Apparently, half of the houses are owned by Overseas Chinese, who are planning to return here to retire. Good luck to them! They probably don’t have to pay an entry fee, like we had, but will still need to wrangle their way through the thousands of tourists that visit this place, who stay in one of the many fancy boutique guest houses, and shop ‘till they drop in the hundreds of tourist shops that line the streets. And we weren’t even in season. 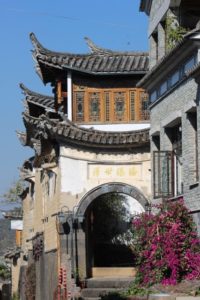 one of the older, and bigger, houses, now a hotel – impressive, though 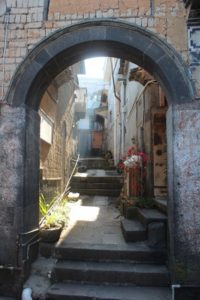 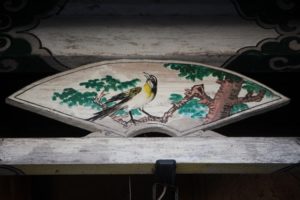 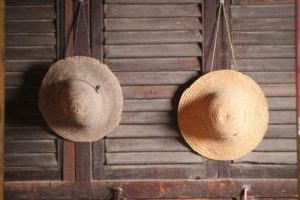 whether these are being used or not, I don’t know

The notion of old village needs some adjustment, too. There are indeed several old houses, nicely patched up, with shiny wooden courtyards – almost all of those have been turned into the fancy guest houses. And there are the new, old-look, houses, concrete but with tiled roofs, made to blend in. More or less blend in, I would say, some are heeding to the needs of modern design requirements, large windows for instance, to enhance the view over the roofs for the tourist. Or perhaps for the retiring Overseas Chinese, who also wants his comfort. So here, too, authenticity is not what it used to be. Which doesn’t prevent me from taking some nice photographs, anyhow, including of those who already seem to have retired here. 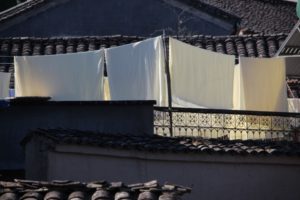 laundry of one of the guest houses 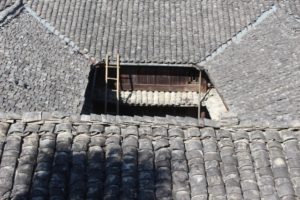 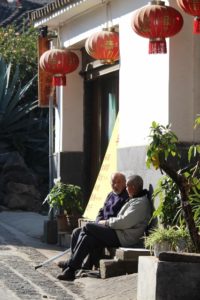 some of the retirees, perhaps? 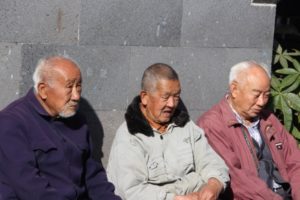 contemplating the developments in Heshun 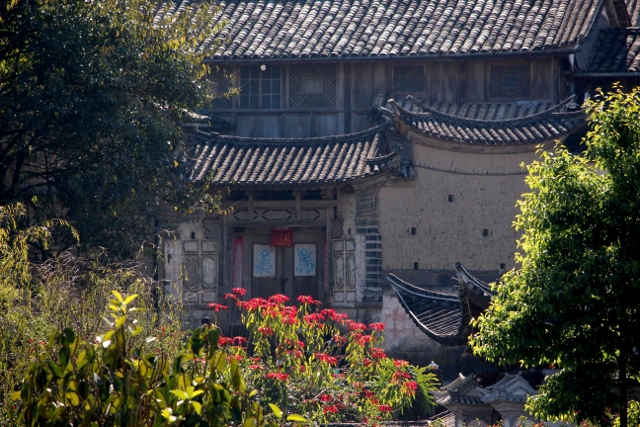 another Heshun house, and the flowers 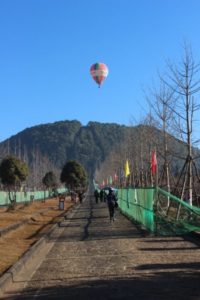 the walk way to the volcano, and the balloon station 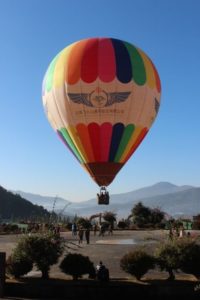 the balloon itself, ready for take off

Then the Volcano National Geological Park, the next tourist attraction. There are – depending on which source you believe – between 70 and 90 volcanoes in the Tengchong area, mostly small, all dormant. The two volcanoes in the Park can be climbed, along steps made of volcanic rock, to the crater rim, for a look inside; inside a dormant volcano, which isn’t very spectacular, overgrown with bushes. Apparently, there are more volcanoes around, in the area outside the park, and there are even outcropping basalts, but you need a car, and more importantly, a guide or some other form of information, to find them. And once again, the tourist service industry failed us here, no guides, no maps. No English spoken. The small museum did have English-language explanation, but provides mostly general information on volcanoes, not much new (not to me, at least). 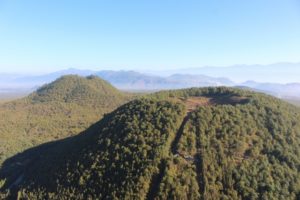 the tallest volcano in the park (the one in the back doesn’t count, is outside) 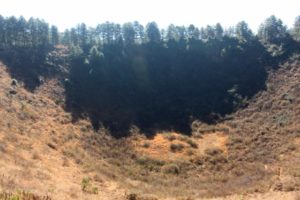 The fun thing to do in the park, however, was a flight in the hot air balloon. Well, in fact the balloon goes up and down, and is at all times tied to the ground with a long rope; the 10 minute ride does rise above the nearest volcano, so we could have seen already how underwhelming the crater was, but never mind. The views of the landscape are nice, indeed; the views of the construction projects below, in the park, less so – you don’t seem to be able to get away from construction, in China! Also funny: despite the technological advances in China the balloon is literally roped in, by sheer manpower. A winch, perhaps, in the future? 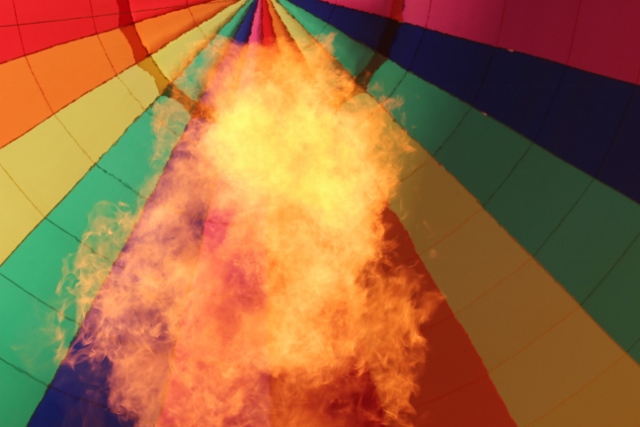 On account of our Volcano Park experience, we decided to skip the Rehai tourist site, which translates into Hot Sea, and refers to a location with several hot springs and geysers. According to reports of earlier visitors, the springs have been reinforced by concrete rims, and the geysers are artificially induced. There is a limit to our enthusiasm for Tourism with Chinese Characteristics. 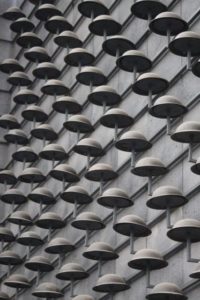 the entrance of the anti-Japanese war cemetery

A more impressive site was the Anti-Japanese War Cemetery, where several thousand Kuomintang soldiers that died in the 1944 battle for Tengchong, are buried. The Baoshan area, and Tengchong, were an important supply line for Chinese troops, with all the sea ports in Japanese hands, and the retake of the city is seen by some as one of the tipping points in the war. But what is more remarkable, as far as I am concerned, is that the KMT (who subsequently lost the internal battle for power in China from the Communist Party, and are now famously holding on to Taiwan only) is openly honoured here, and that so many Chinese people come to pay their respect. Including laying white flowers, and three bows for the hill with all the graves. As I said, impressive.

afterwards we continued, by memorable bus journey, to Jinghong 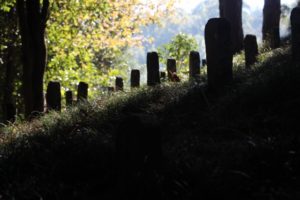 a hill full of graves 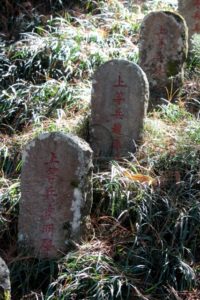 and the individual stones, all with the same characters (unknown soldiers, perhaps?) 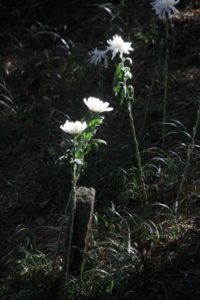 some have fresh flowers 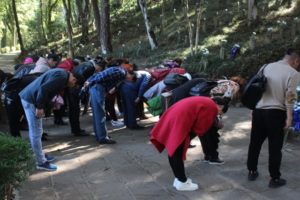 collective bowing, out of respect for the martyrs 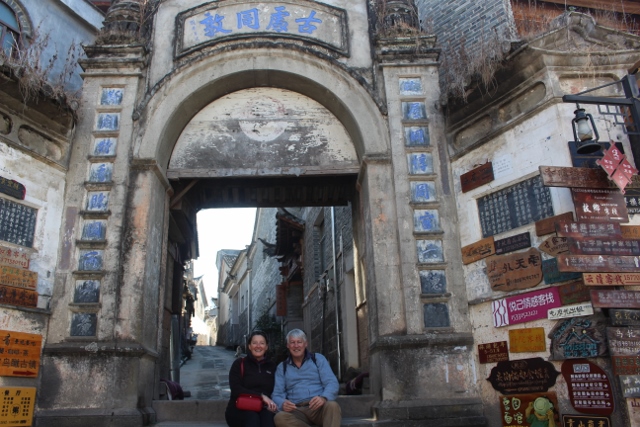 oh, and that is us, in Heshun

3 Responses to 09. the Tengchong tourist spots