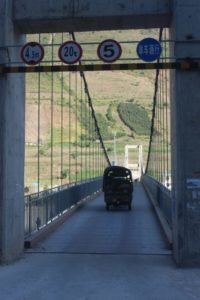 one of the many hanging bridges across the Nujiang, the Nu River

The journey from Bangkok via Kunming to the start of our next travel target, the Nu River, was actually a very smooth one, but the reconnection with China after 20 years does trigger some observations.

The part I was most anxious about – the stretch of our journey where various pre-arranged things could go wrong – actually passed very smoothly. The plan, all booked ahead, was to fly to Kunming in Yunnan, overnight at a hotel near the airport, and continue the next morning by plane to Baoshan. Here we were to pick up a bus to Liuku, at the start of the Nujiang gorge, the river we were going to follow upstream for a few days.

We had booked our Kunming ticket on ominously-called Lucky Air, leaving in the evening and arriving around midnight. Lucky Air proved a sort of budget-airline, Chinese style, in fact very efficient. Most Chinese airlines keep the front two rows free, in case some important people turn up at the last minute; the check-in staff thought us important enough to give away two seats on row one (unfortunately, budget airlines don’t have business or first class, but never mind: comfortable enough). In Kunming we found an information desk with a very friendly, English-speaking man, who phoned our hotel to announce that we had arrived. Upon which the hotel sent the shuttle bus. “Near the airport” actually meant a good 15 minutes’ drive, further eroding our potential sleeping time, but by two in the morning, we switched off the light.

Which we switched on again five hours later, thanks to a wake-up call from the hotel – yes, there are places where they still do this! An hour later we were back on the shuttle, to the airport, into a plane and the air, and back on the ground in Baoshan by 11:30. From here no more bookings and reservations, but thanks to a travel companion who hasn’t forgotten all her Mandarin yet, we managed to grab a taxi to the long-distance bus station, managed to find out that the bus to Liuku was to depart 45 minutes later, managed to arrange some food in the form of instant noodles – that ever-present emergency option in China -, and then got on the bus. Could not have gone smoother, or better timed. 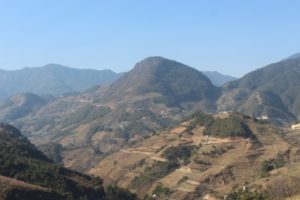 the mountains outside Baoshan, villages dotted around

Having last been to China some 20 years ago, we cannot escape some comparison, of course. Things have changed, as was to be expected. The outskirts of Baoshan, a small city (in Chinese speak, a small city has around 1 million inhabitants, a medium city 2.5 mln, and a big city over 5 mln. – is what I learned long time ago), the outskirts of Baoshan was one large concrete jungle under construction, high rise apartment buildings, fly-overs, motorways. 20 Years ago construction was a big thing, too, in Beijing, but now it has reached places like Baoshan (and even smaller towns, as we will see later). The motorway we were on was six lanes, but obviously this was not going to be enough for the future. Soon, however, we left the motorway, to turn onto a smaller road to Liuku. And do we leave all the construction behind, at least for a while, as the road meanders through half-high mountains, past smaller villages. 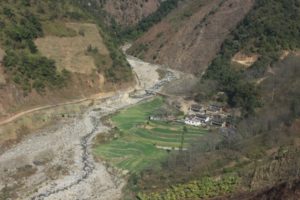 hamlet next to a stream 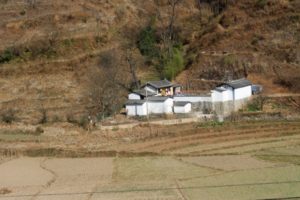 one of the few authentic buildings, outside Baoshan – they still exist!

What hasn’t changed, is the requirement that foreigners register. Our target was the Nujiang Valley – the Nujiang, the Nu River, further downstream becomes the Salween River, which runs through Myanmar and empties in the Indian Ocean. But the origin of the river is in Tibet, and the road upstream reaches there, ultimately, so perhaps this is a particularly sensitive point, Tibet being a no-go area for foreigners most of the time. As soon as we entered the valley we were stopped an army check point. Being the only foreigners on the bus, we were directed to a man with a computer, who took our details, like passport and visa numbers. This took him no less than 15 minutes – I hate to think what happens if a bus full of foreigners arrives here. But all very friendly, very relaxed. Perhaps that is one of the things that has changed, too: the Chinese, including the military, seem much less obsessed with foreigners than 20 years ago. We do get the occasional person trying to sneak a picture, or a video, of us with their mobile phone, but not like back then, when a foreigner was something special, to be stared at.

Having registered, and having promised to be back in 4 or 5 days, and not head on to Tibet, we got back on the bus and arrived a little later in Liuku. 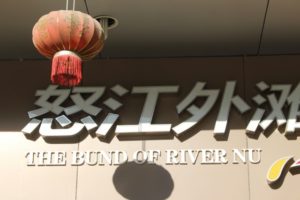 the Bund of the Nu River, I am not joking!

Where we had expected a small town – a small town in our interpretation, not to the Chinese definition -, we actually found ourselves back in a sizeable city; certainly not walkable, to give you an idea. But a lot of this ‘sizeable’ was new, and as yet unfinished, construction. The bus station was at the end of a boulevard along the river, humbly called the Bund of the Nujiang, complete with Bund Hotel (to be sure, nothing compared to its famous namesake in Shanghai). Lots of other buildings seemed finished, but totally empty. The same for the wide streets and avenues, where, unlikely for a Chinese city, there was hardly any traffic. As it transpired, the older part of town was a little further upriver, but clearly Liuku has ambitions. For the time being, however, no reason to stay any longer than a night’s sleep, in a brand-new hotel.

next: the Nujiang Valley 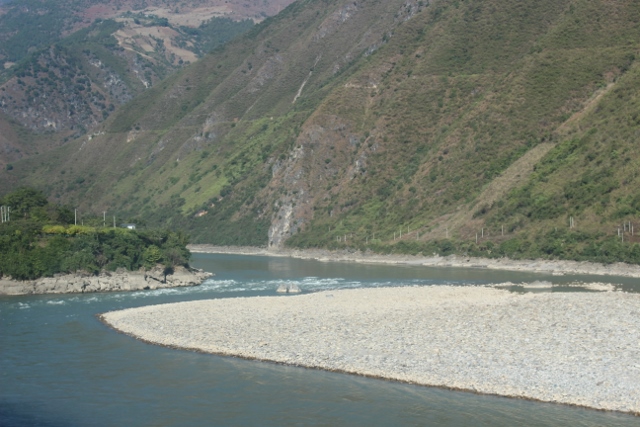 our first views of the Nujiang, the Nu River

3 Responses to 03. the journey