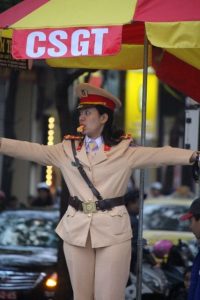 Atmospheric Haiphong has its harbour, and little else, besides a few temples on the way to Ninh Binh.

For being the third-largest city in Vietnam, Haiphong is strikingly devoid of tourist attractions. We stayed in town before and after our Halong Bay trip, so we made the most of it, which wasn’t much. There is the theatre, built by the French at the beginning of the 20th Century. There is a statue of the female general and Vietnamese heroine Le Chan, almost as serene as the female police woman attempting to manage the traffic during rush hour. The flower market is gearing up for the Tet Festival, the Vietnamese New year in four weeks’ time. In the small Den Nghe temple the staff are collecting the offerings of the day. The museum, another impressive French colonial building, is closed; according to my guide book, “even during its advertised opening hours the museum is often closed, but you’re not missing much”. 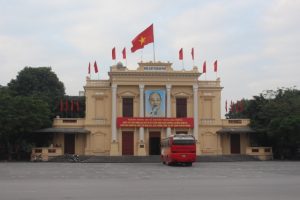 the French-built theatre: they wouldn’t have approved of the current decoration 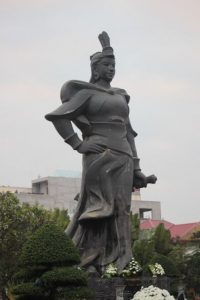 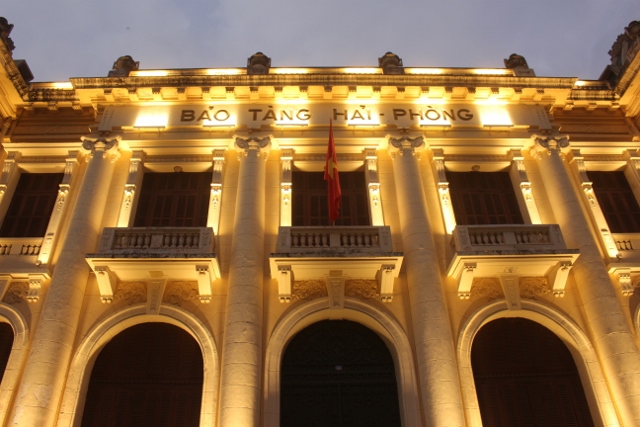 the museum, another Fench colonial relic 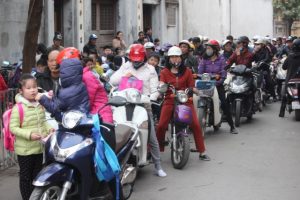 traffic jam: mothers picking up the children from school

And yet, Haiphong has a certain atmosphere, a certain character, that makes it special. The city is alive, and not just because of the chaotic traffic, the thousands of motorbikes that work their way through the old colonial streets. Or the hundreds of mothers on motorbikes that come to pick up their children from school. The pavements are busy, but people are not pushy, they smile, friendly. Nice place. Pity there is so little to do, except for the beer gardens.

Of course, by then we have seen the harbour already, on our way to Catba and back. Big container ships and other sea-going vessels share the waterways with river boats carrying goods inland along the Red River. A small ferry puts people and cars across one of the arms of the delta, another serves as river taxi to jetties further away. Still, it is all fairly quiet, there is not much of the usual harbour activity going on. A huge bridge, apparently paid for by Chinese money, is under construction, but nothing seems to move there, either. 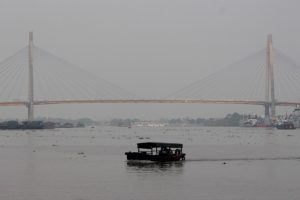 one of the bridges near the harbour 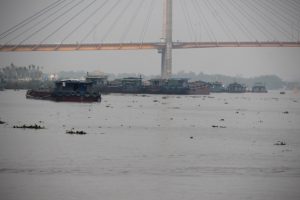 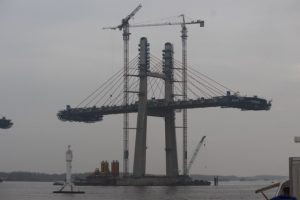 a new mega-bridge being constructed 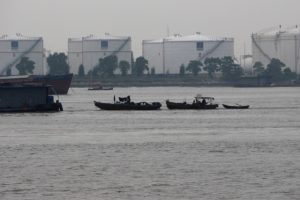 some smaller vessels do move, in an otherwise very quiet harbour 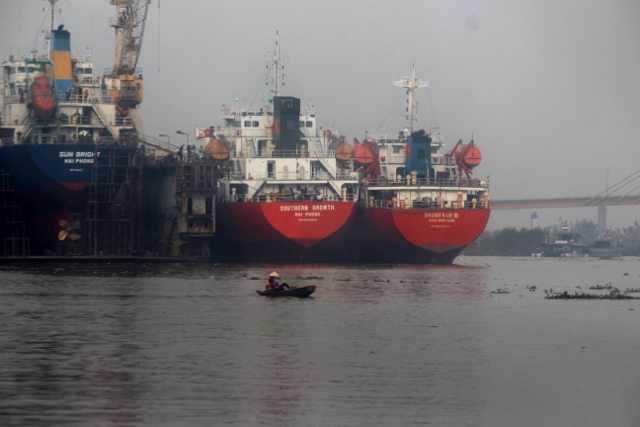 and the smallest one, a little canoe in front of sea-going ships 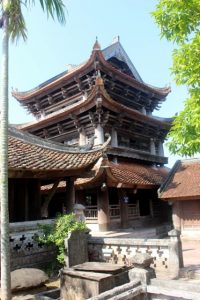 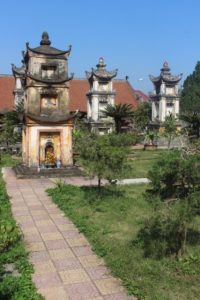 a few old tombs in the back of the monastery 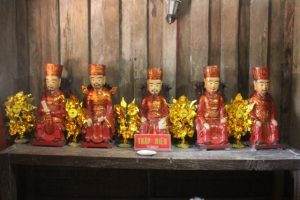 scupltures inside the Chua Keo temple 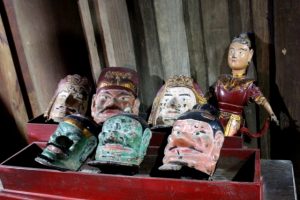 and some interesting masks, not seen anywhere else yet

We arrange a car to take us to Ninh Binh and visit a couple of sights on the way. The outskirts of Haiphong are mostly industrial, and not very attractive, but beyond the factories the Red River delta is an agricultural power-house, with endless rice paddies. Near the town of Thai Bing is the Chua Keo, a Buddhist cloister originally established in the 11th Century, but relocated to its present position in 1611 after flooding. Several with dragons and phoenixes decorated wooden temples align, and culminate in a 12 meter high clock tower at the far end of the complex. 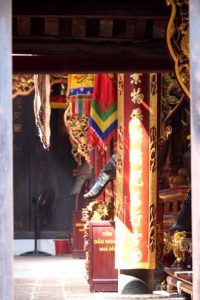 a look inside one of the Dan Tren temples 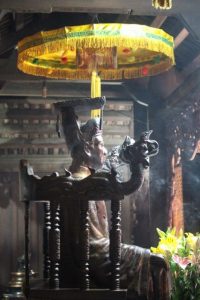 one of the Tran kings in the Dan Tren temple complex 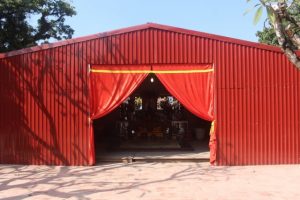 and the emergency temple, not to interrupt the stream of believers and their offerings during refurbishment

The Den Tran temples, in the village of Tuc Mac, have been built in honour of the Tran Dynasty who ruled from 1225 to 1400, during a for Vietnam prosperous period. All 14 kings are represented in sculpture form in one of the temples, their ancestors have a separate temple. A third one is being restored, but a temporary building has been constructed from corrugated iron not to interrupt the offerings process. The one thing that strikes me about this, and so many other temples in Vietnam, is that they are very active: obviously, lots of people come to observe their religion here, a process that keeps many people in the temples occupied, too. 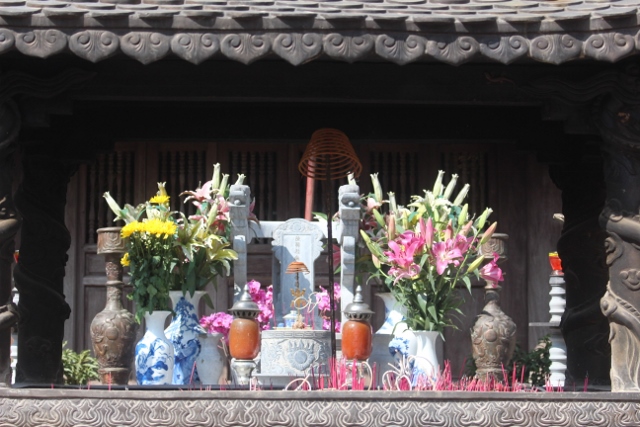 these are some of the offerings