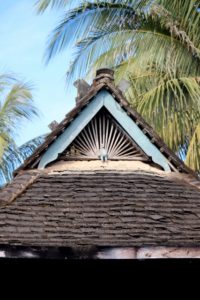 traditional roof in Ganlanba, adorned with a peacock

For the first of three entries about villages in Xishuangbanna, we traveled to Menghan, or Ganlanba, along the Mekong. 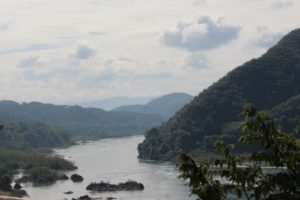 well, one glimpse of the Mekong, but that is all!

There is a wide choice of small towns and villages to visit, around Jinghong. Confusingly, they all sound very similar, Mengzhe, Menghai, Menglun, Menghun, Mengla. We settle first for Menghan, also known as Ganlanba, a small town 30 km scenic drive south along the Mekong. For the time being still without a driver-guide. The plan was to go by bus, but a taxi driver convinced us, so we settled for the taxi, instead. The advantage of a bus is that the seats are relatively high, providing a good view of the world outside. The taxi windows were at the level of the concrete slabs that protect cars from driving off the road and into the river. Which have been placed along all of the 30 km scenic drive along the Mekong. We didn’t see much of the Mekong. 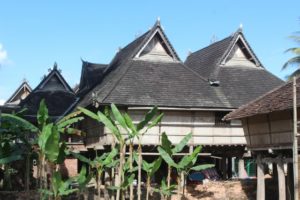 the typical Dai houses, on stilts, in the outskirts of Ganlanba 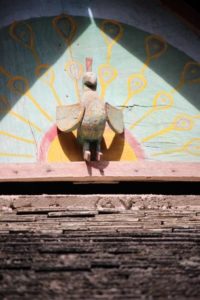 roofs decorated, often with a peacock 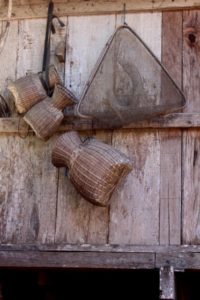 and utensils hanging outside

Ganlanba is famous for its Xishuangbanna Dai Ethnic Minority Park – the Dai are the largest minority in Xishuangbanna, ethnically related to the Thai -, where you can observe Dai ethnic minority life, including daily water splashing festivals laid on for tourists (inconveniently, the real festival is only once a year). You can also participate dressed up in Dai cloths, for a little extra charge. Right, exactly our thing! We skipped the Park. And wandered around instead, to the inevitable market, and in between the original Dai houses, impressive wooden constructions on stilts. Each Dai village also has a Buddhist temple, and in Ganlanba this was a nice old structure, decorated inside and out.

next: Menglun, another village, with a Saturday market 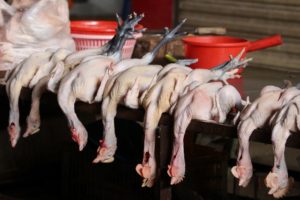 and chicken, ready for sale 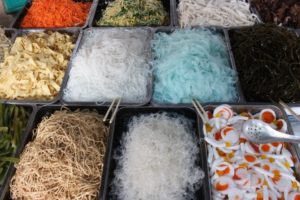 colourful noodles and other foods in the market 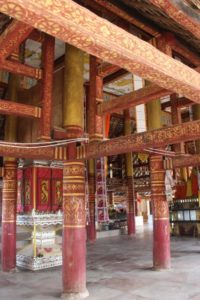 the inside of the temple in Ganlanba 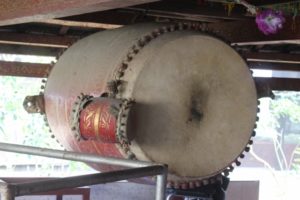 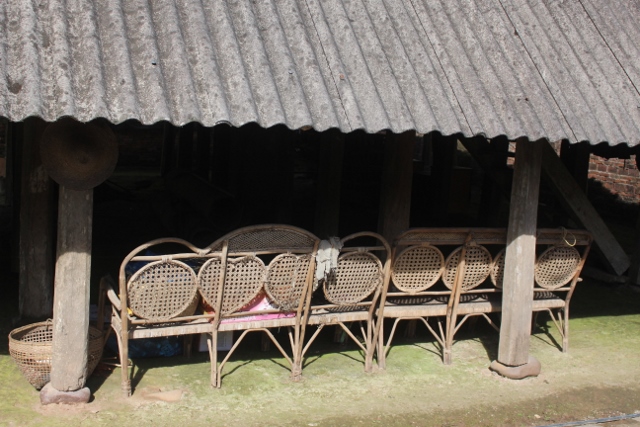 the ratan bench below one of the houses