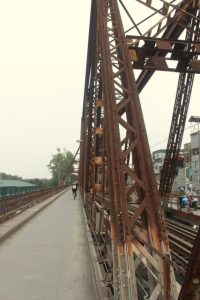 the Long Bien bridge, for trains, motorbikes and bicycles, across the Red Rivver

The tourist industry has developed many tour opportunities in Hanoi; not all of them are equally attractive, as far as I am concerned.

We have been a few days in Hanoi now, and I got the know the city reasonably well. Including the mad traffic – not as bad, perhaps, as Bangkok, or Saigon, but pretty chaotic nevertheless. The good thing is that trucks don’t seem to be allowed during daytime, so the streets are entirely the domain of busses, cars, motorbikes, and the occasional lunatic on a bicycle. And the pedestrians who have been forced off the pavement, either because there is no pavement, or because the pavement is occupied by motorbikes parked, or a noodle restaurant, or anything else that prevents the pedestrian from passing normally. 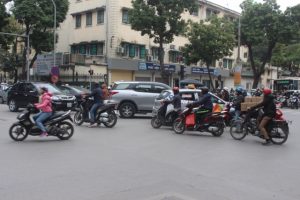 the traffic at a random Hanoi junction

The rules are fairly clear, the one who occupies that piece of road first, has right of way. Not necessarily the biggest, but certainly the most agile – motorbikes cut corners, and go against the traffic if opportune. Especially when traffic lights change colour, everything mingles together without any form of order, the ones who depart from the traffic light early anticipating green and the ones just too late to avoid red, but getting through anyhow. Needless to say that all of this goes accompanied by the liberal use of the horn, from cars, and even more so form motorbikes.

The safest solution for the accidental tourist? Stay inside, in your hotel. Ok, get out very carefully, and walk the pavements of the main avenues, which are mostly OK. If you have to, walk the smaller roads, but as little as possible. And whatever you do, do not get onto a bicycle, these are only for lunatics.

Which was exactly what my travel companions – there are temporarily two of them – suggested. Our hotel offered a half-day tour, cycling in and around Hanoi, see the rice paddies in the Red River Delta, a temple or two, a fruit farm, nothing really strikingly out of the ordinary, really. And anyhow, I don’t like cycling to start with. So why on earth would we risk our lives? “Because it was something else to do; we would get a bit of exercise, we would get to places where we otherwise would never get to…” 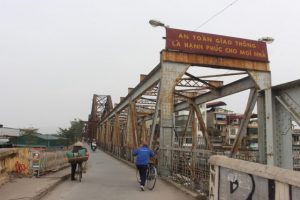 the Long Bien bridge, oldest bridge across the Red River

To cut a long story short, we booked the tour, which started with lunch in the old town. So far, so good. But then we were given a mountain bike each, a flimsy helmet, and the instruction to follow our guide, who was also on a bike. And then we dived into the Hanoi traffic. As lunatics.

Miraculously, we made it to the Long Bien bridge, a rusty metal construction and the oldest bridge to cross the Red River – for a long time even the only bridge across the river, which is why it was such a tempting object to bomb during the Vietnam War, yet unsuccessfully. In fact, the traffic from the saddle wasn’t as bad as it looked from the pavement, and with everybody else experienced in avoiding collision, we were all still alive.

On the other side of the river traffic was slightly less, and less chaotic. But by now I was preoccupied with something entirely different: I started to feel my buttocks, thanks to the uncomfortable bike saddle. Did I say earlier that I didn’t like cycling? It is just not very comfortable, that’s why. 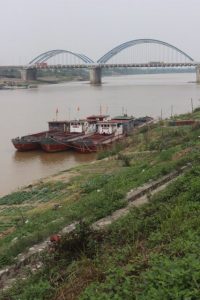 another brranch, another bridge to climb 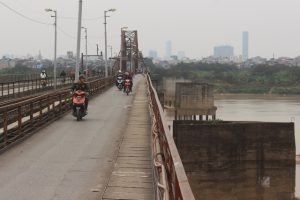 and another view of the bridge, looking back to Hanoi 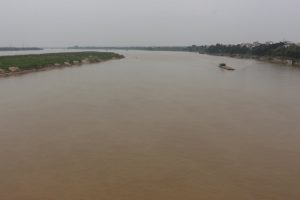 Red River, vast expanse of water, and this is just one branch

Yet the next challenge was presenting itself already, the Vietnam-version of the Brienenoordbrug (my Dutch readers will know what I mean). Luckily, the bike had just enough gears to get me to the top. On the other side, we finally moved to the smaller roads, thankfully with much less traffic. But also with many more potholes. And the Vietnamese version of the cobble stones. Thing is to get out of the saddle, if you see some unequal surface coming. If you don’t – see it coming, or get out of the saddle, either way -: a further attack on the buttocks. Which were already suffering pretty badly. Things get worse. Our guide steers towards the rice paddies, and especially, to the ridges between the rice paddies. Which have been muddy, some time ago. And which are rather uneven, to say the least. Buttocks! Oh, and which have low hanging branches from trees, too. 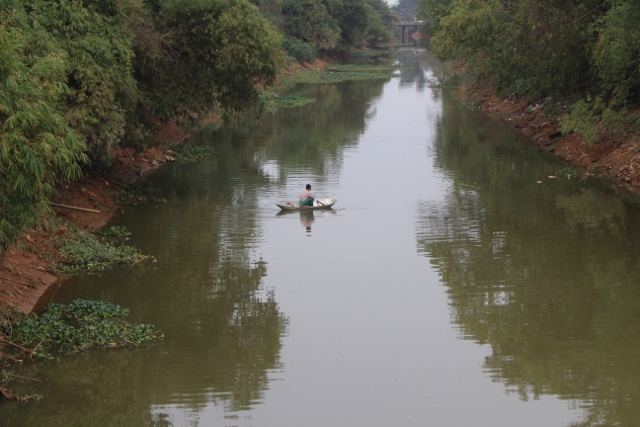 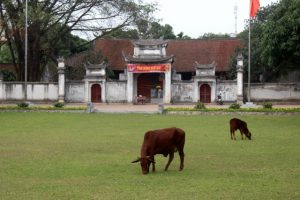 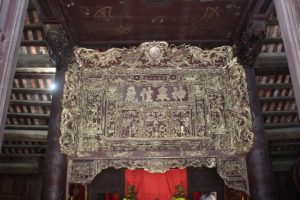 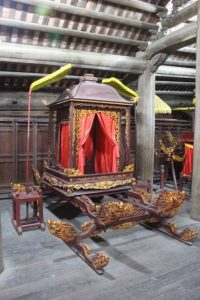 which much better forms of transport than a bicycle 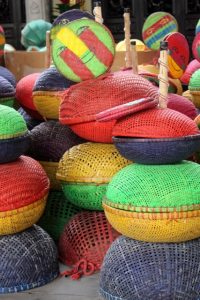 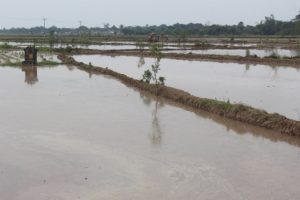 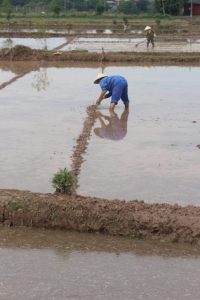 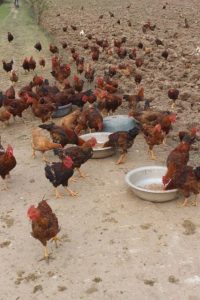 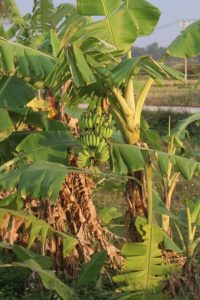 bananas in the afternoon light

In between, we visit a few temples, amongst them those at the locality of Co Loa, allegedly the founding place of Vietnam. Which was nice enough. And an opportunity to get out of the saddle, and some relief. Dreading the moment we would continue again. To the fruitfarm with a stable full of white rabbits. Past the rice paddies, with people working up to their knees in the water. And past all these Vietnamese who you can almost hear thinking: “lunatics!”. The only consolation was that there are a few other cyclists, too: giggling and “hello”-shouting children going home from school. What didn’t help was that my travel companions kept on saying how nice all of this was; that we would otherwise never had gotten here; that it was so good to see Vietnam from a different angle. They like cycling. They have done it before. 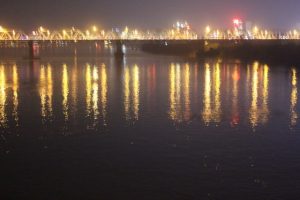 Hanoi by night, from the bridge

Anyhow, we got back some five hours later. Our guide knew a short cut. Which involved crossing an eight-lane motorway. It got dark. The roads are fairly well lit. But many traffic participants don’t have light. Neither did we, except for a reflector. It was rush hour, crossing that bridge was suddenly challenging for different reasons, thanks to the hundreds of motorbikes sweeping past. Surrounding four cyclists. Lunatics!

My travel companions loved every moment of it. I didn’t. Self-inflicted suffering, I know. And I even paid for this! 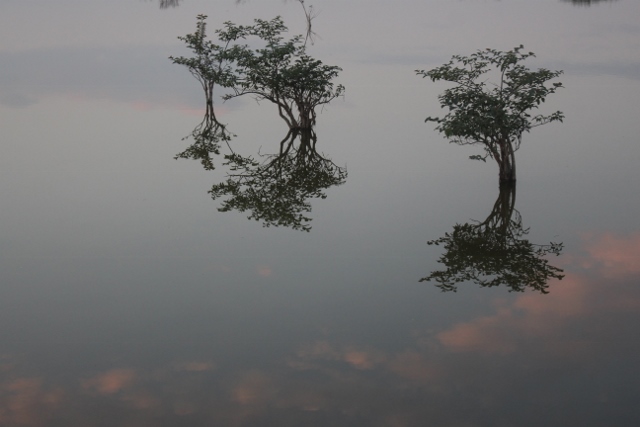 something growing in the water 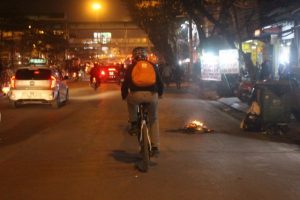 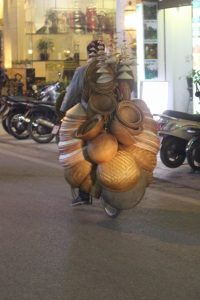 there was at least one other lunatic on a bicycle 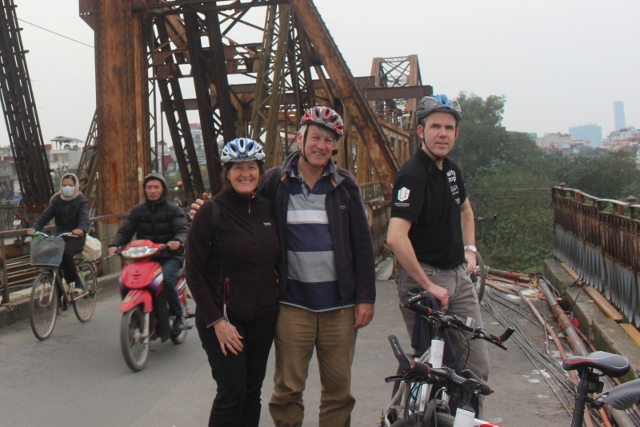 One Response to 26. the bicycle ride