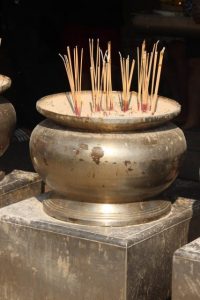 A journey like clockwork to Phitsanulok, to admire an active temple instead of all the dead rock temples of the past week.

There are days that everything works. Today is such day. We check out of our hotel, which is in the old town of Sukhothai, to get to the bus station, 14 km further in the new town. Whilst we are contemplating whether to call for a tuk tuk or for a taxi, the town bus pulls up, a fabulous, mostly-wooden contraption that goes only once an hour. To the bus station. Where the next bus to Phitsanulok leaves in ten minutes, just enough time to go and explore nearby shops for biscuits. But the bus leaves early, and we miss it, whilst buying supplies. Only for another bus, a much more luxurious one, to appear just minutes afterwards, which whisks us to Phitsanulok within an hour. 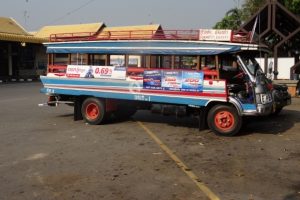 the local town bus in Sukhothai 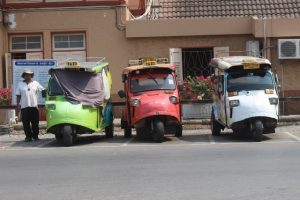 and this is the transport in Phitsanulok

The bus is going to the bus station, outside town, but in doing so passes through the centre, where I recognise the hotel we booked; no problem, bus stops and drops us 100 meters from our hotel. Our room is not ready yet, of course not, we are so early. So we head for the shopping mall next to the hotel, to look for a pair of trousers for me, as I ripped my last trousers the day before, leaving me with nothing else but my shorts. First thing we see in the department store is a stack with trousers, exactly like I like them. The first one I try fits perfectly, and happens to be discounted by 50%. Back in the hotel our room is ready, so we check in, dump our stuff, and head for the train station to book tickets for tomorrow. Just in time, there are only two tickets left for the Super Express into Bangkok. There are these days….

We had come to Phitsanulok, an administrative centre in NW Thailand, to avoid a long bus ride to Bangkok, and take a train instead, a far more agreeable way of transport if available – and if you are not in a hurry. Besides, the town has one of the most venerated Buddhist temples outside Bangkok, and reputedly an attractive night market. Reason enough. 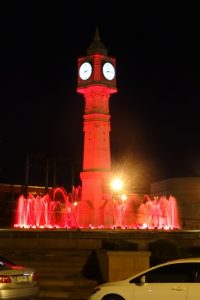 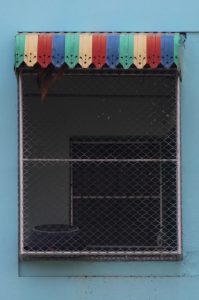 a window in town 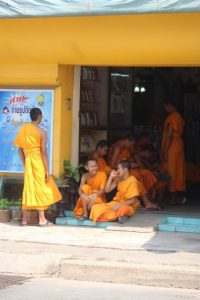 and some of the monks gathering in a shop 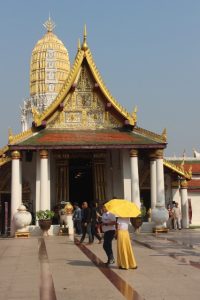 the entrance to the temple in Wat Sri Rattana Mahathat 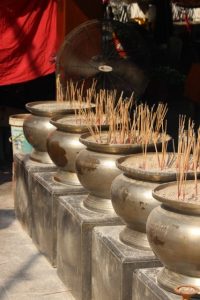 incense sticks, burning being stimulated by a fan 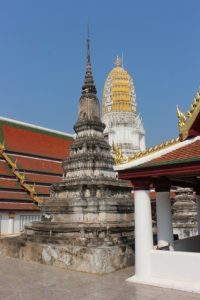 an old stupa on the premises, and in the back the new prang 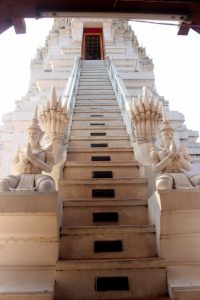 steep stairs lead up the the prang’s temple room 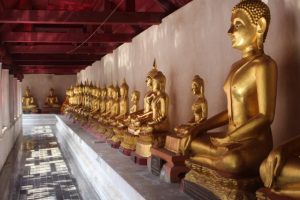 and golden Buddhas line the walls on the Wat 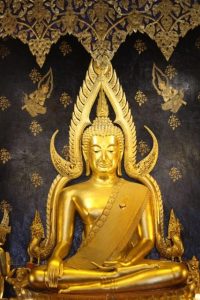 this is the most venerated Buddha sculpture 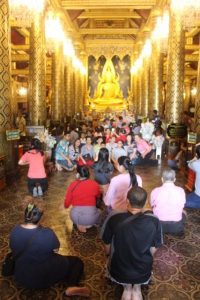 and this is how it looks, half facing the Buddha, the other half the camera 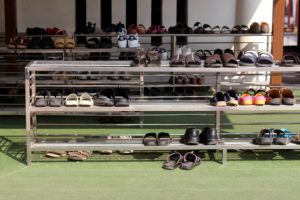 shoes are being left outside 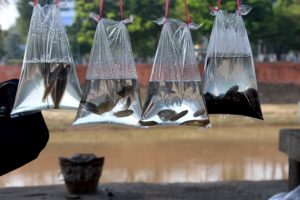 life fishes for sale, to be let free 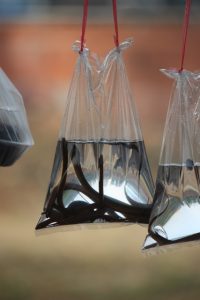 and to gain merit 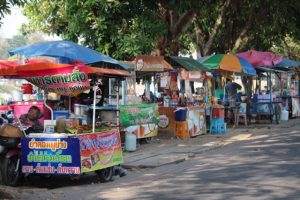 dead fish for sale in the many food stalls, for eating

Finding Wat Sri Rattana Mahathat was initially a bit of a challenge, as there are many wats – temples – along the riverside in Phitsanulok. And nothing is being signposted in English, it is Thai-only here. But then I spot the tourist service office, in English, next to one temple complex and although the office itself is closed, this is enough of a give-away. Indeed, inside it is obvious that I have arrived at the right place, as have hundreds of local people, too. This is an active temple, as opposed to the many stone ruins we have seen in the past days, with its own charms: at the same time a very religious place, as well as a chaotic business platform. Vendors outside sell incense sticks, flowers, fake money, all required for offering. Others sell live fishes, which can be freed in the nearby river to attain merit, or dead fishes, which can be eaten in many of the food stalls outside. Lots of people are praying in front of the many Buddhas, but at the same time – this is a narcissist world after all – taking selfies with the statues in the back. Which leads to the funny situation that, in front of the most venerated of all statues, half of the people are facing the statue, and the other half are turned in the opposite direction, looking into camera or telephone. There are several rooms with Buddha statues, and the walls of several courtyards are lined with further statues, all new, all gold-coloured. A steep flight of stairs leads into the prang, to a small temple room towering above all others. This is how the stone ruins of Ayutthaya and Sukhothai must have looked like, hundreds of years ago, before the statues were vandalised. 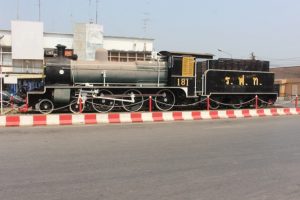 the engine in front of the railway station

Oh, and another observation, not for the first time: where the centre of Phitsanulok looks pretty run-down, the temple is impeccably maintained, freshly painted, clean. A matter of priorities, I suppose.

There is little else to keep us in here. The night market is as so many night markets we have seen before, always fun, and always some special food to admire. But it is pretty small, and in the end we have our meal in a restaurant along the river. The next day we make our way to the railway station, which proudly announces itself with an old train engine outside, and head back to Bangkok.

next: the beach, and time to reflect 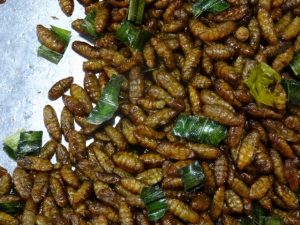 insects in the night market 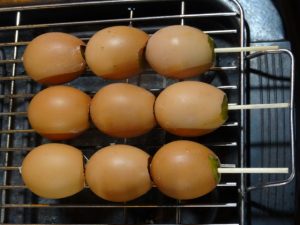 and egg sate, a rather curious snack 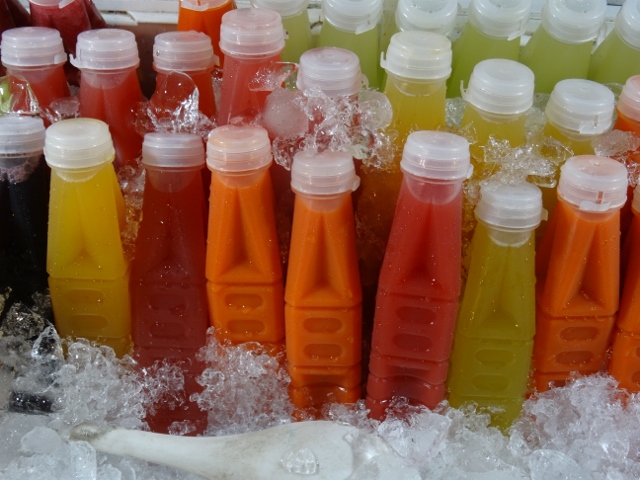