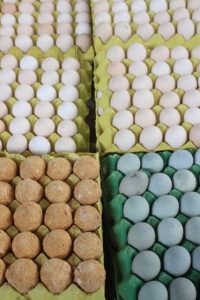 Time to look back at our three weeks in China, and compare a little with 20 years ago.

Notwithstanding the fact that our three weeks in China have not entirely brought us the anticipated natural beauty and scenery, either because our expectations were too high or the clouds were too low, the reconnection with China has been a valuable, and very interesting, experience. First and foremost, there was the issue of communication. I had been led to believe that English, by now, is much more wide-spoken than it was 20 years ago. Well, not so in Yunnan, where English skills are almost completely non-existent, with the exception of a handful of school-age children who just about manage a “hello, what’s your name?”. No problem for us, of course, with my Mandarin-speaking travel companion! 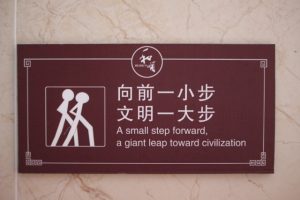 I found this one in the men’s toilet – a sign of progress, both literally and figuratively speaking 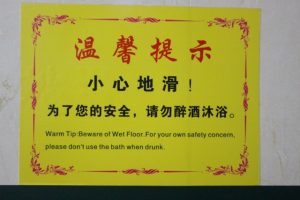 and this I found in one of our hotel bathrooms, showing a considerable amount of empathy

And indeed, on plenty of occasions she got it right, managed to strike up a conversation, managed to arrange the basics. And on plenty of occasions the fact that we managed some Mandarin was appreciated, and relaxed our Chinese conversation partner. Especially amongst the younger generation people are quite open, self-confident, willing to chat – something that 20 years ago would have been unthinkable. Yet, it was not always easy. Quite a few Chinese simply don’t believe that a non-Chinese can speak any Mandarin at all, so refuse to listen. Or – and that, admittedly, happened especially when the team operated without my Mandarin-speaking travel companion, yet required some basic information, like the closing time of the restaurant, for instance -, there is the occasional lack of interest, an indifference towards communication, an attitude of “if you don’t understand me, that’s your problem, why should I bother. Why should I even try?” Especially among the older generation, they refuse to understand, refuses even to understand basic gestures, where we try to communicate with hands and feet. (Of course, where they did communicate, we didn’t always understand correctly, either, especially in bus stations.) 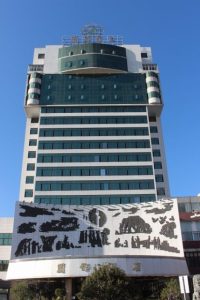 hotels have come a long way – our Baoshan luxury hotel

Nevertheless, despite the occasional communication challenges, and despite the absence of Google, blocked in China (and thus no Google Maps, no Google Translate), we managed to get where we wanted to go. Of course, the tourism infrastructure was often absent, non-existent, too. No travel agencies, no city maps, no information provision. But then I realise that most Chinese tourists travel in a group, and most foreigners travel with a guide: everything arranged beforehand, no need for on the spot improvisation, or local advice. And yet, there were always just enough people to help, when it really mattered – when we asked four people for directions, there was always one who pointed to the right way. We managed to survive the hotels and the restaurants, and even the bus journeys. 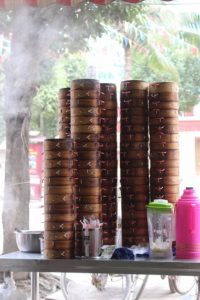 with luck, dumplings for breakfast

Hotels have come a long way since our travel experience from 20 years ago. Everywhere we found relatively comfortable, mostly modern hotels, efficient, and more often than not with friendly staff. Not once did we have a squat toilet, even the more basic hotels had at least some rooms with Western toilets. Which is not the case with breakfasts: no fried eggs and bacon, no toast, no yoghurt, no fruit. No coffee or tea, even – we survived on Nescafe. Breakfast was noodles, and very occasionally only, dumplings or momos. Particularly memorable was the noodle breakfast in one hotel, where you could enrich your bowl with herbs, spicy sauces and even grated cheese, of which I put a lot. Too late I realised that there is no cheese in China; the grated cheese turned out to be finely cut garlic. 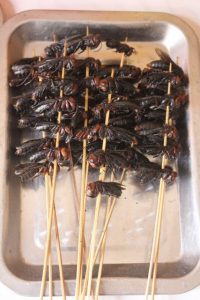 yet, we decided against it, in a rare case of squeamish-ness 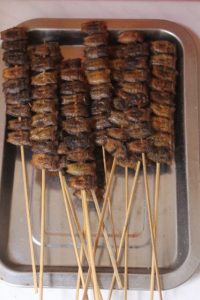 these were for sale together with the Jianshui tofu 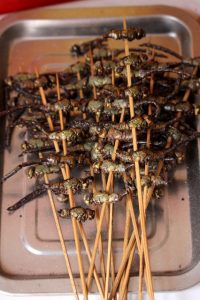 all kind of skewers, did I say?

But we relished the lunches and the dinners, real Chinese, always tasty, even the simplest greens, and always light. Like the Chinese, we took every opportunity to eat, and tried everything that looked even remotely attractive. Ok, the smashed chicken feet – we didn’t realise when we ordered what looked a very tasty dish – weren’t a success; chicken feet have many small bones, and when they have been smashed they become even smaller. But grilled tofu, all sorts of charcoal-grilled skewers, and many sorts of fresh fruits, in addition to the regular Chinese fare, went down well. We even found a cured ham that was on par with the best Spanish ham, and together with quail eggs, for several days this made for a tasty bite before dinner. 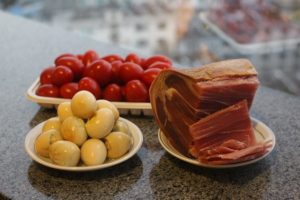 this was, for a while, our only form of ‘ham and eggs’ 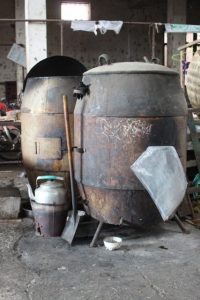 the ham had been smoked in these vats 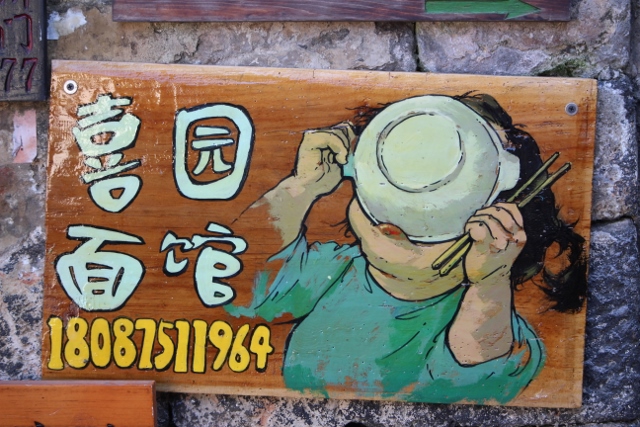 for most of the time, we loved the food!! 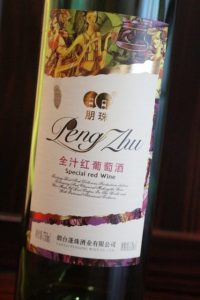 the first bottle of Chinese wine we tried – through the sink 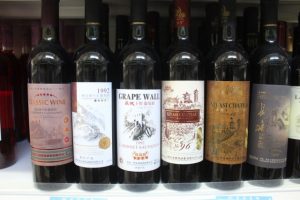 lots of variety in wine, these days 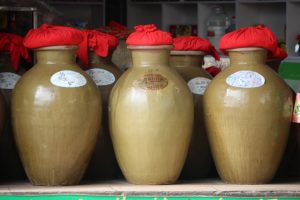 this would have been an alternative: moutai, Chinese grain alcohol

Where it went wrong was with the wine. From our earlier life in China, we were most impressed with the Yunnan Red, and less so with Dragon Seal and Great Wall, the two general brands. Nowadays, wine producers have not only multiplied, but also diversified, so we found many different Yunnan Reds. Our initial enthusiasm cooled quickly, however, after we had to flush the first three bottles through the sink. Undrinkable. Dragon Seal doesn’t exist anymore – at least, we never found it back -, and in the end Great Wall proved the most reliable alternative (not to be confused with Grape Wall, of course, yet another new producer). After a while, we gave up on wine consumption altogether.

I already commented on the street scene, motorbikes instead of bicycles. Lots of trendy cloths, and – not unlike the rest of the world – everybody on the smart phone. Chinese have always been noisy, at least in my memory, and with the advance of thee smartphone, this has just gotten worse. Because Chinese have the habit of speaking loud, very loud. Also into their phones. On the bus, for instance. Or in a restaurant. Even on the toilet – many of the toilets in older bus stations are open – they are talking in their phones. You get used to it (well, except to the toilet). In any case, Chinese don’t seem to be able to live without noise, whether it is a megaphone in the market, repeating automatically the same message every 30 seconds, or an annoying jingle in almost every shop. Or the car horn, of course, used on the sighting of another car, a motorbike, a pedestrian, or a dog or a chicken. 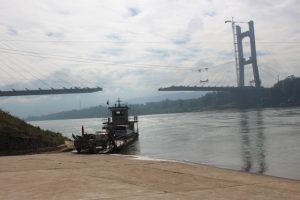 construction progress, which will soon put this ferry across the Mekong out of work

But most of all, there is the noise of construction – I have said it earlier. In the city centres, along the roads, everywhere the Chinese are building. That is not different from 20 years ago, when we saw Beijing grow. But now growth is everywhere; in each and every city we have been to, old houses are being pulled down and new high rise is being build, in every rural area we have passed, the pillars for new motorways are being erected. Seven days a week. And that may lead to some personal disappointment, perhaps, over the disappearance of authentic villages, original wooden houses or anything else traditional. But the Chinese have a different view, they see their country modernise rapidly. They are proud of that progress, and you cannot blame them for that. It is indeed an economic miracle: you may hear about it, read about it, but seeing it, it is inescapable. Impressive. Sooner or later, they will dominate this world. There is no doubt in my mind that that moment is near.

And, come to think of it, that is not different from what I thought 20 years ago. It just that they are much closer now. 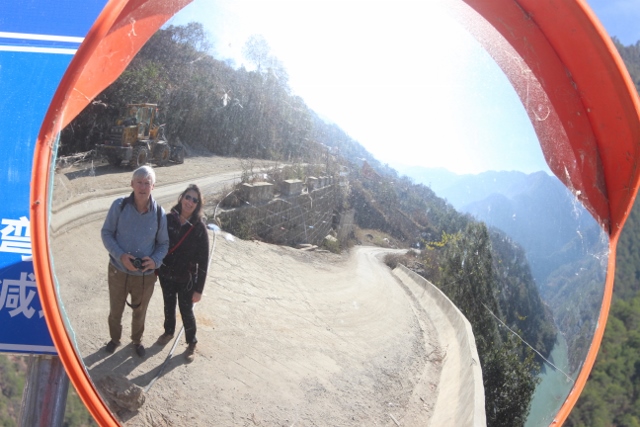 a couple of haphazard tourissts, looking down into the gorge of the Nujiang

2 Responses to 18. the intermezzo