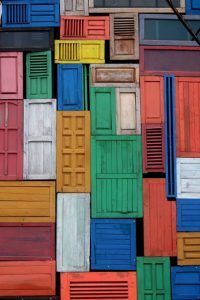 Vientiane, equally laid-back as Luang Prabang was, and this entire country, is a pleasant place to break our journey to Thailand.

On our way to Thailand we stop off in Vientiane, a place we had also visited eight years ago. Then I called it a sleepy town that was slowly waking up. Not much has changed, or it must be that there is less of the old French colonial architecture – many of those buildings are no longer used, or seem to have collapsed -, and more of the new Chinese developments. Outside the centre is a whole new Chinese neighbourhood, with Chinese hotels, restaurants, shops. The latest wave of expatriates, the most recent business visitors, they come not from the west but from the east, that much is clear. Which is indeed what we have seen all around Laos, this time. Our lovely boat trip on the Nam Ou, eight years ago, is now no longer possible, with Chinese dams blocking the river. On the roads, for the first time, fast driving cars and trucks appear, often without number plates, but with Chinese characters on the side. In the vicinity of major construction sites traffic signs are not in Lao and English, but in Lao and Chinese. The new order has already arrived, here. 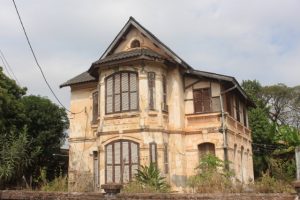 this, then, is one of the colonial houses in town, for as long as it lasts 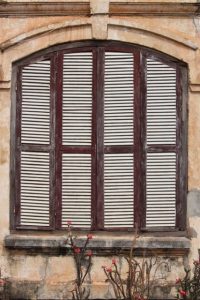 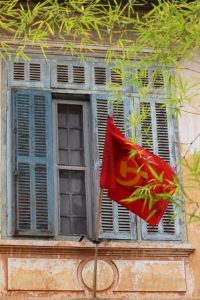 and another building has beer requisitioned by the communist party 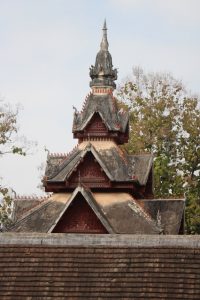 little tower on the side of Wat Si Saket 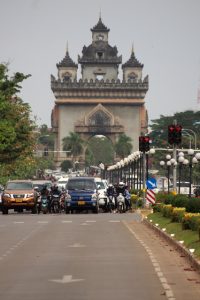 Vientiane has its own, monstruous, version of the Arc deTriumph

Vientiane, if anything, has become more touristic. The strip near the Mekong is entirely given over to guesthouses and restaurants, a bit like in Luang Prabang. Yet, unlike Luang Prabang, there is little to entertain the tourist. Unlike Luang Prabang, the town has an abandoned look, poorly maintained buildings, paint flaking off, dust covering everything. A bit of a joke, for a capital city. And it is not that it is impossible: the many temples in town look impeccable, freshly painted, clean. There are almost no really old temples, since the Thai raided and burned down the town in 1828. We have a look at the one that survived the onslaught, Wat Sisaket, a wooden structure from 1818 which is wonderfully decorated inside (no photographs permitted, unfortunately), with frescos and roof decorations. Some of the frescos are being redone, which may not be an improvement. Outside the temple hundreds of Buddha sculptures are being exhibited, large and small, and many pretty old, perhaps 15th or 16th Century. Behind the bigger sculptures lots of small niches are filled with two little sculptures each. Quite a few have their heads chopped off, something we have seen before when religions clash – or when treasure hunters can only carry small pieces -, but all together this is a very impressive collection. 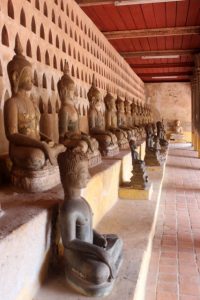 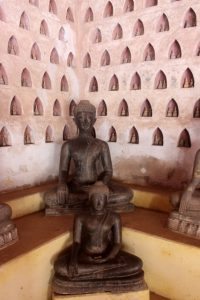 a corner Buddha, another one in front, and the many niches behind 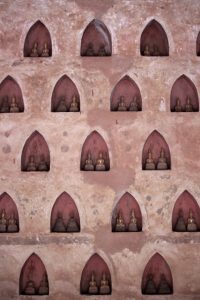 more of niches, all filled with two small sculptures 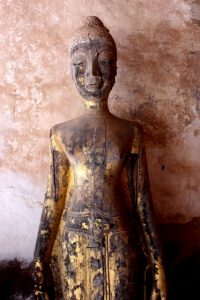 and one of the older sculptures (I think)

The centre of town is no more than two parallel streets, with very few cars. Rush hour doesn’t really seem to exist. There is no high rise, except for the sporadic new apartment building overlooking the Mekong, which is not very attractive here. The occasional bookstore sells books in English, which very much looks like illegally photocopied books. The State Bookstore sells the same photocopied books. Other shops display artisan products, artefacts, and antiques – perhaps, but nothing looks very attractive, masks are coarsely carved. And yet, Vientiane, too, is a very pleasant place to while away a few days; relaxed, sleepy indeed. 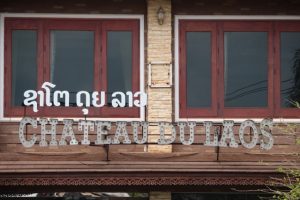 a moment’s scare, not another SE Asian wine producer!, but luckily, this is just a wine merchant 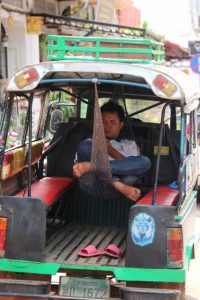 this is a laid-back country: tuk-tuk driver waiting for clientiele

A comfortable bus, really VIP with air-conditioning this time, carries us over the Friendship Bridge across the Mekong, past perhaps the easiest border crossing formalities we have ever experienced, and into Thailand. 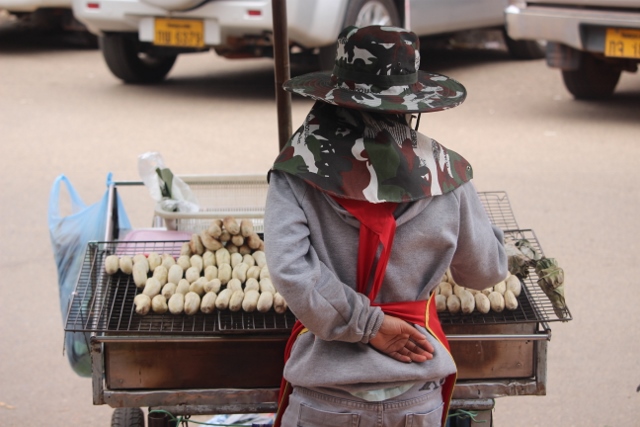