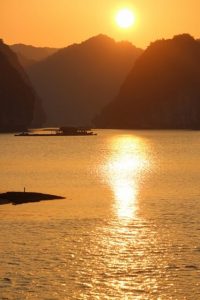 Halong Bay, one of Vietnam’s biggest tourist attractions, didn’t disappoint, partly thanks to our rather comfortable arrangements.

The biggest tourist attraction of this entire trip is Halong Bay, the karst landscape off the coast of Northern Vietnam. So we had carefully analysed the weather forecast, to ensure our visit would coincide with the best possible conditions during our two weeks in Vietnam – quite a challenge, on account of our experiences so far. 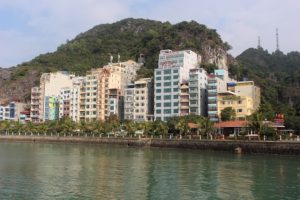 a row of hotels at the Catba harbour front

Early one morning we took the hydrofoil from Haiphong on the coast to Catba, the centre of Halong Bay tourism on a small island in the bay. And lo and behold, halfway the clouds, at least most of them, cleared and a watery sunshine established itself, which held for most of the rest of the day. 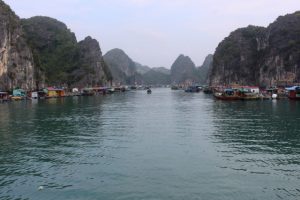 the floating village from where the tourist boats leave 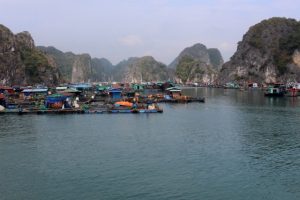 quite a few floating houses, in fact 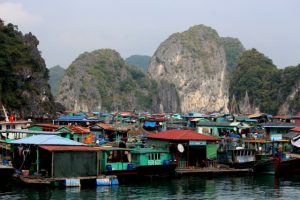 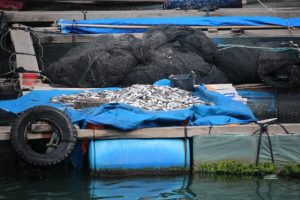 and little fishes, to be fed to the bigger ones in the fish farms 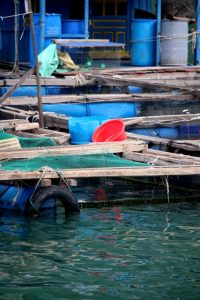 a collection of connected jetties and pontoons 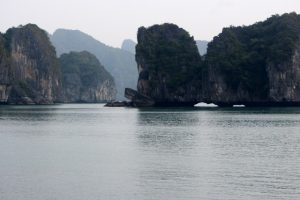 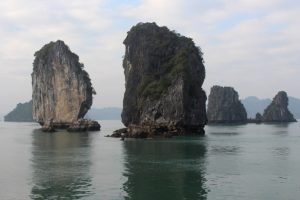 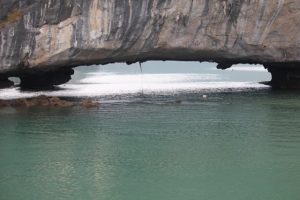 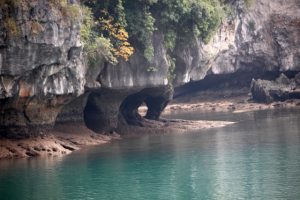 and the effect of varying water levels from the tide 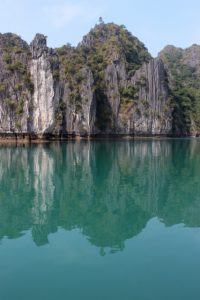 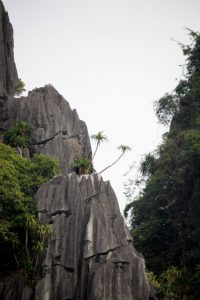 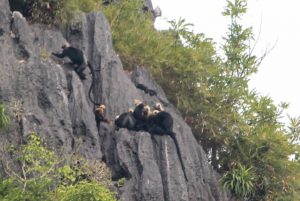 and a family of monkeys debating the next steps 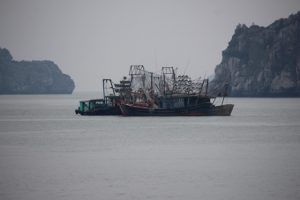 not only tourism, also fishing is economically important 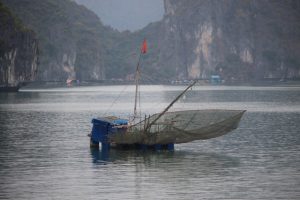 either with so-called Chinese fishing nets 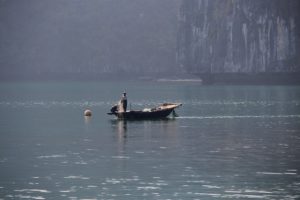 or through nets that are being picked with small canoes 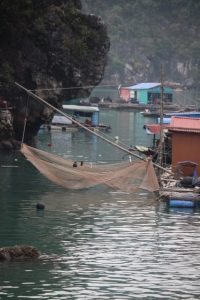 another Chinese net, attached to a floating family house 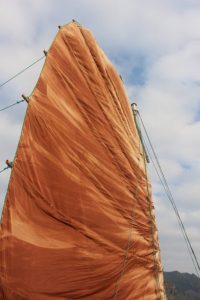 our sail, not especially hard working 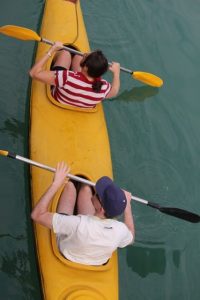 haphazard tourists struggling in a kayak 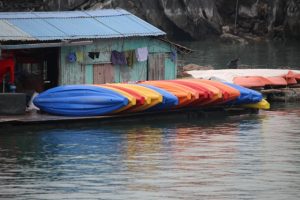 kayaks are being rented out from several places

And then Halong Bay is very nice indeed! We had booked ourselves on a private boat, a junk equipped with sails, just two cabins for the three of us, large and comfortable deck chairs, a captain and a cook. Which was all we needed. By ten in the morning, the captain steers the boat away from the harbour whilst we establish ourselves in the deck chairs, by twelve the cook has prepared us a fabulous seafood lunch, for which we temporarily leave the deck chairs, and by two we have installed ourselves once again in the deck chairs. To see the many small bays, tiny little beaches and rocky karst hills pass by, to watch the fishermen check their nets, to observe the various villages and fishing farms go about their daily business. Occasionally our captain approaches an island where many other boats are moored, indicating a touristic attraction – think of monkeys, or a kayaking centre -, but on most of those occasions we manage to convince him to continue. It is, in any case, too cold for a swim. My two more active and sporty travel companions do, at one stage, get into a kayak to frustrate themselves for an hour, or so, but for the rest we maintain our peaceful course, as far away as possible from the other boats.  To emphasize this peaceful atmosphere, we suggest to the captain to raise the sails and switch off the engine. But the sails are obviously only for the show, they are being raised late afternoon, but not for sailing. And the engine is never switched off. “Then we will capsize”, is the captain’s view. He has never sailed before in his life, so much is clear. 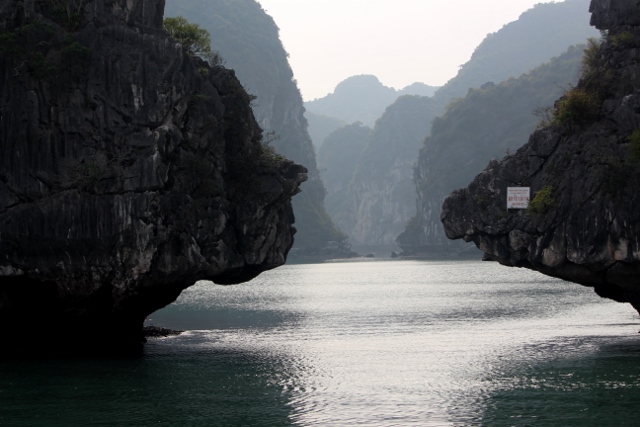 another view of Halong Bay 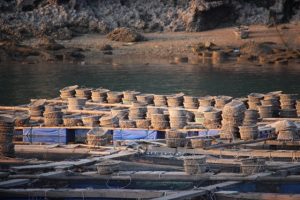 these are empty baskets, stacked on a pontoon 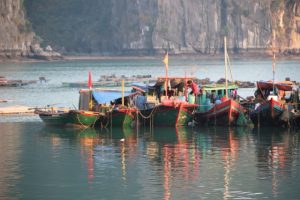 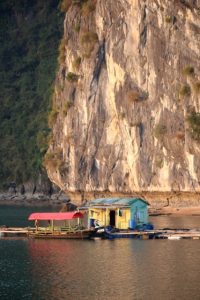 another little floating house, with boat 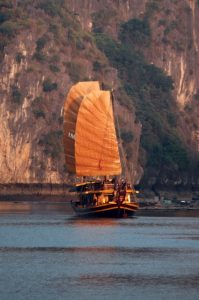 one of the rather nice tourists boats, also with useless sail

In the evening we anchor in a small bay. Sunset, more food, early night. And the next morning, more of the same – albeit with less sunshine. Back in the harbour at noon, after an early lunch. Great way to have spent a day. 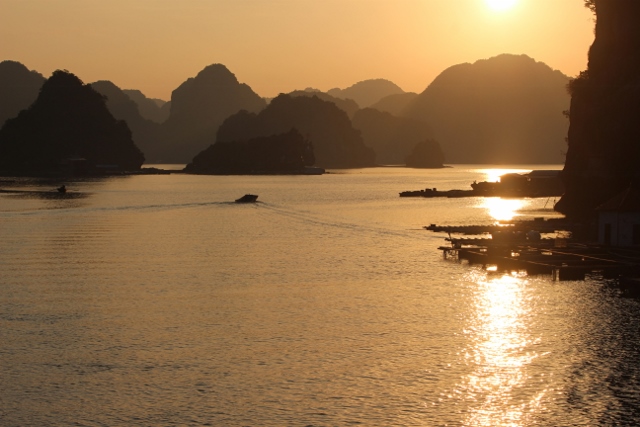 and sunset over Halong Bay, again