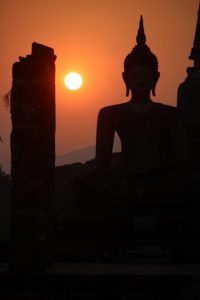 sunset behind Wat Mahathat in the Sukhothai Historical Park

Thailand’s other ancient capital, Sukhothai, has a fabulous collection of ancient temples, situated in a park with colourful birds and plants and trees.

The magic that was lacking in Ayutthaya we find back in Sukhothai. Here the Historical Park is a park indeed, containing the many temple ruins of this old city, but nothing else. Early morning, with very few other tourists, the low sun light, and no other traffic inside the park but our bicycles – again!! -, there is a serene atmosphere that fits such setting. We wander freely around the ruined temples, only occasionally disturbed by a busload of Italians or French, who arrive in a convoy of electric golf carts or a peloton of bicycles of their own. 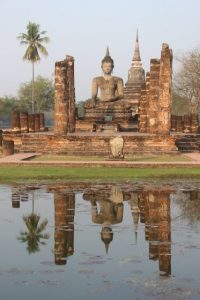 part of Wat Mahathat, mirrored in the pond 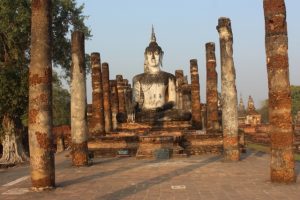 colonnaded area and one of the Buddhas in Wat Mahathat 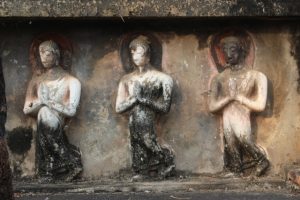 apsaras decorating a column base in Wat Mahathat 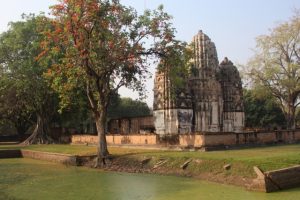 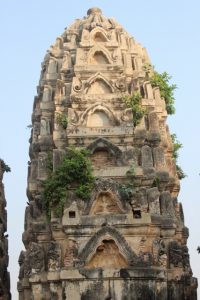 details of the central prang 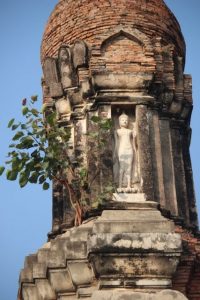 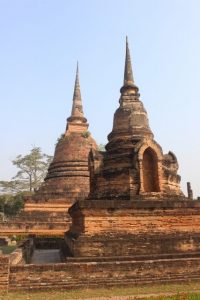 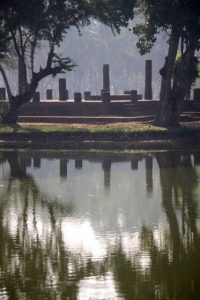 some column remains at a small island 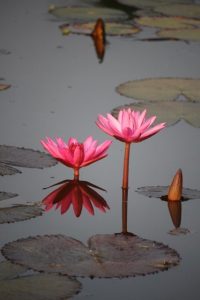 Another thing lacking in Ayutthaya, but present here, are the heads on top of the Buddha sculptures; would these be original? And if so, why have they not been chopped off here, in a place which is so much older than Ayutthaya? Unlike in Ayutthaya, the Buddhas here are individual, larger-than-life size statues, and they definitely add to the atmosphere. There are several around the largest, most important complex, Wat Mahathat, which also contains a tall single spire-like stupa, a colonnaded reception area and several collapsed brick buildings, some decorated with apsaras – the dancers also present in Khmer temples around Nachon Ratchasima, and in Angkor Wat – and other sculptures. Nearby Wat Sri Sawai is smaller, characterised by three prangs next to each other, whilst several smaller temples have just on or two stupas and a Buddha in front, like Wat Traphang Ngoen and Wat Sa Si.

The peaceful atmosphere of the park is enhanced by the many flowering trees, Bougainvillea and Frangipani, and by the many water lilies in the ponds. Besides, there is a large amount of birds around, not only the ever-present pigeons, but also more colourful species like wood peckers and king fishers. Nice contrast with the predominantly grey ruins! 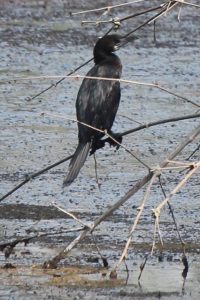 one of the many birds 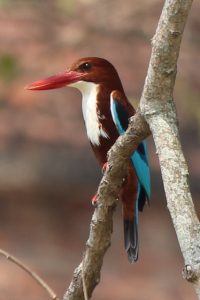 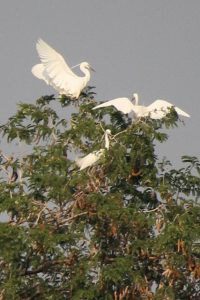 and trees full of these ones 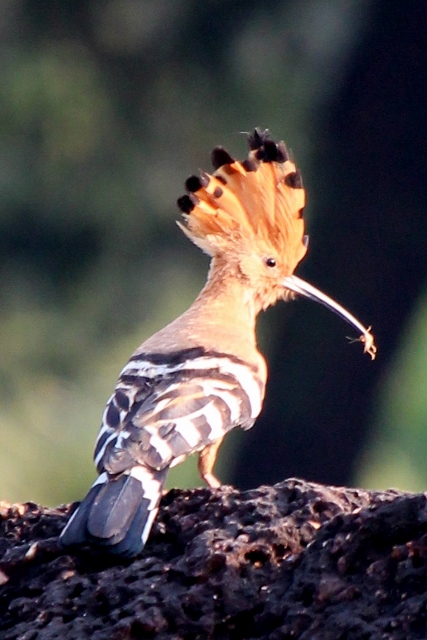 wood pecker in the park 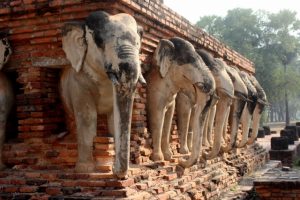 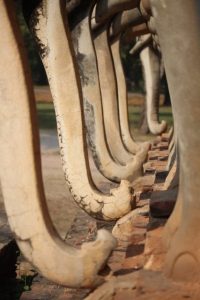 with the trunks from behind 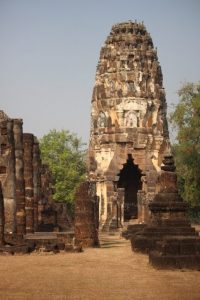 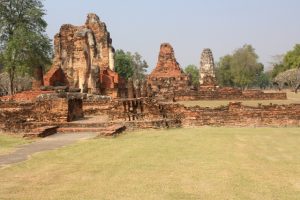 and an overview of the Wat Phra Phai Luang 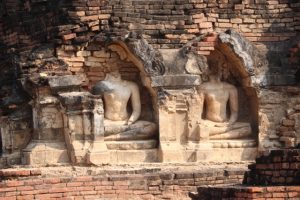 here Buddhas have been decapitated 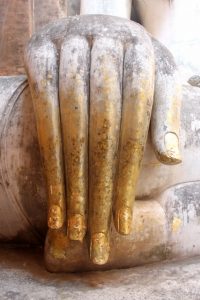 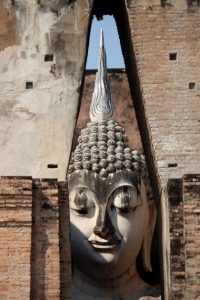 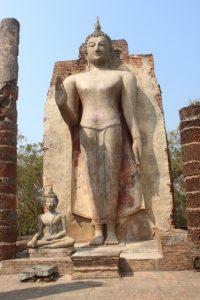 with the Buddha at the top 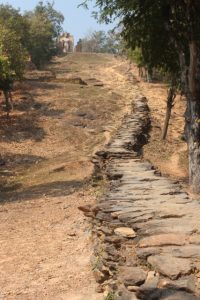 the path to Wat Saphan Hin

More temples are located north of the central area, a short bike ride away and just outside the old city wall. Whist the central area now fills up with tourists, fewer people bother to explore further afield, and we have Wat Sorasak, with its elephant-decorated base, and the large Wat Phra Phai Luang, to the west, almost entirely for ourselves, not counting the cows that are being let to graze in between the ruins of some of the minor temples. Here, the Buddha statues have been decapitated again, so indeed in the central area they have probably been restored, for the benefit of the tourist. The exception is Wat Sri Chum, where a large, obviously new Buddha is housed in a newly constructed, or entirely restored, building.

Even more effort, in terms of bicycle power, is needed to visit the temples west and south of the old city. To the west several ruins are located on the top of low hills, requiring a short climb. The temples themselves are perhaps less impressive than the ones we have seen so far, but the area is nice, wooded, and even I enjoy the cycling here – despite the now quickly rising temperature, we are already in the high 30s! And that with all those hills! South of the old city only Wat Chetuphon is somewhat sizable, the other ruins are all fairly small compared to the more impressive complexes.

Some 45 minutes away is a second Historical Park, Si Satchanalai, with temple remains of the same age as those in Sukhothai. But after so much stone, temple fatigue is setting is, and although I may regret it later, we decide to skip this one. There are only so many temples we can appreciate at any one time. 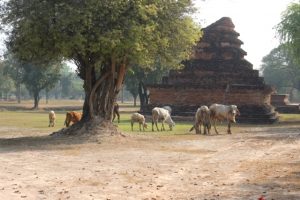 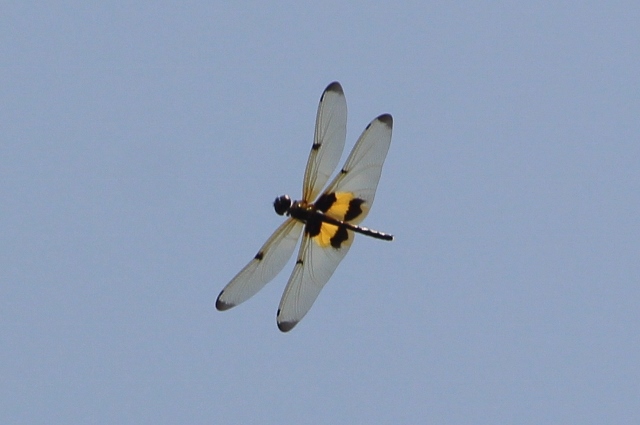 some form of libella in the park 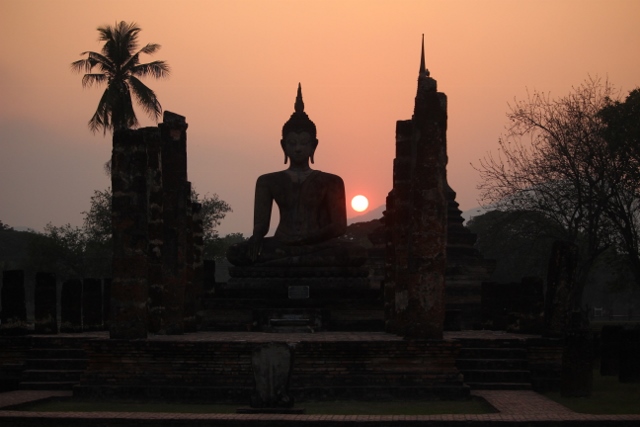 and sunset, once more