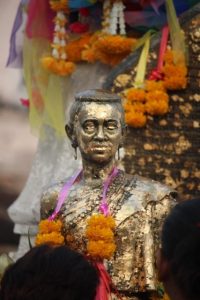 Nachon Ratchasima is the perfect base to explore the surrounding Khmer temples of Phimai, Phanom Rung and Muang Tam, each individually a great example of ancient glory.

One of the larger towns in Isaan, Nachon Ratchasima, or Korat, as it is more often informally called, is an excellent base for visiting some of the spectacular Khmer temples in the region. Of course, these are small fry compared to the fabulous Angkor Wat complex in Cambodia, but they are attractive enough in their own right to warrant some time on our travels. It is anticipated that they formed part of the northern route to Angkor Wat, and were part of, or at least under the influence of, the Khmer empire at the time. 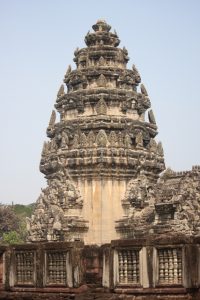 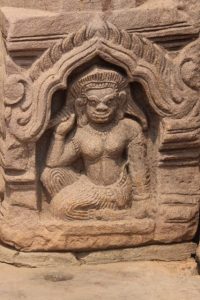 Perhaps the most important temple is Prasat Hin Phimai, built in the 11th or 12th Century. The main temple building, perhaps 15 meters high, is intricately decorated with friezes and sculptures depicting stories from the Ramayana, the most important Hindu book, and from Buddhist history. It is surrounded by other buildings, several platforms, and a wall, mostly constructed from red sandstone. When we arrive it is pretty busy, mostly with local visitors – there are very few foreign tourists in Isaan -, but somehow they rotate much more quickly through the complex than we do, and soon we have the place almost for ourselves. Which gives the experience just that extra atmospheric feeling. 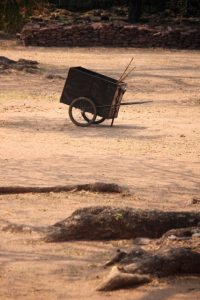 the grounds need to be kept, too 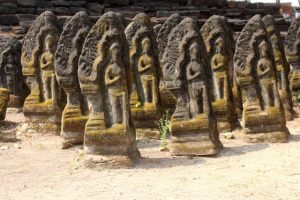 ‘old look’ corner stones in a distant corner of the complex

Wandering to the side of the complex I came across more than 40 old headstones, neatly stacked together; there is clearly still some restoration to be done, I thought. Until I noticed one that had fallen over, and cracked, displaying the reinforcement metal inside the concrete. These are not old headstones, these are new ones getting an ‘old look’ by weathering, in the corner of the complex, until they look authentic enough to be installed at some corner of the temple! In fact, many of the real old pieces are being kept in the museum nearby, which has an extensive collection of friezes, lintels, headstones and pillars. Some of them heavily weathered, some of the images almost invisible, from hundreds of years of erosion from water and wind. Perhaps putting some fake, but well-faked, stones onto the temple isn’t such a bad idea after all. 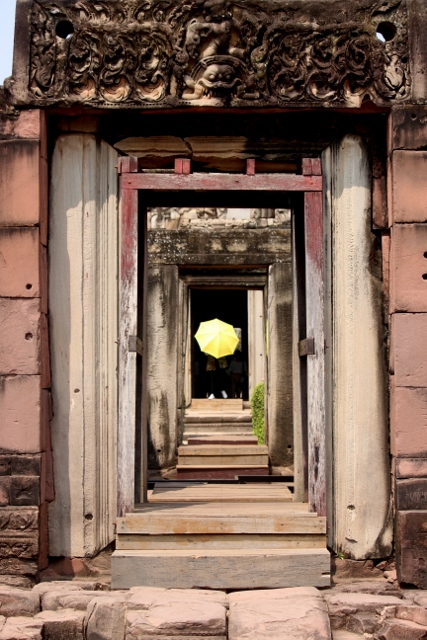 a yellow umbrella to provide some shade – and colour 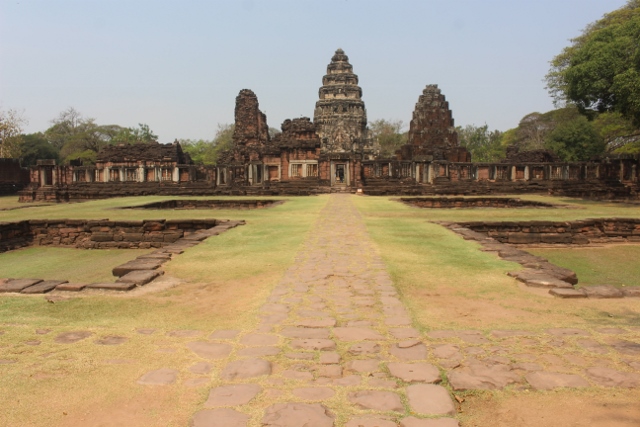 approach of the main sanctuary of Phimai 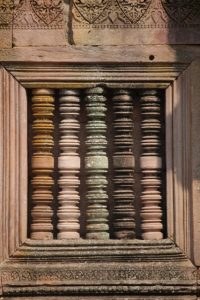 window at the Prasat Phanom Rung 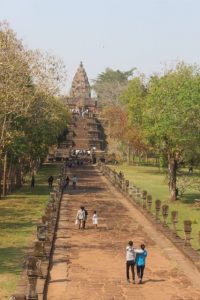 the long walkway, approach to the temple 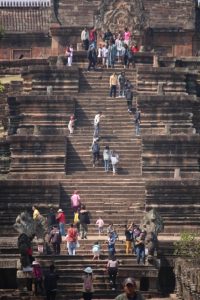 and the stairs – we are not the only ones today 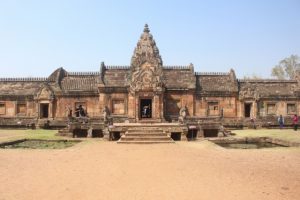 the temple sanctuary itself

The next day is a Sunday; the second temple we visit, the Prasat Phanom Rung, is more crowded. For the first time in Isaan we spot some elevation, the hill – which turns out to be an extinct volcano – on which the temple is built, at approximately the same time as the Phimai temple. The approach to the temple is a long walkway of red-coloured laterite blocks, flanked by sandstone pillars with tops in the form of lotus buds. At the end of the walkway, steep stairs lead to the inner courtyard, and the main temple building, which is not as tall as the one in Phimai. Here, too, Hindu scenes provide the subject matter of the decorations. Secondary buildings and arched gateways surround the temple in four directions. Most visitors limit themselves to the main temple, but these surrounding buildings are also interesting, and as they are almost deserted, a wonderful way to escape the humble crowds. 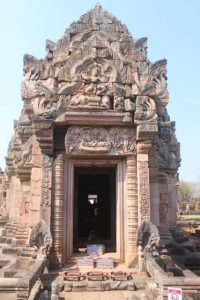 the entrance to the main building 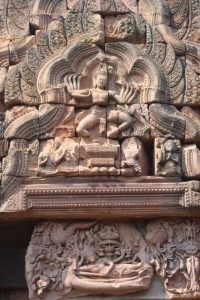 and the decorations overhead 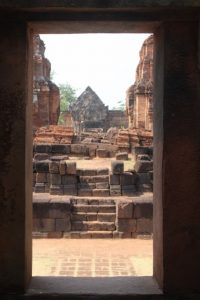 peek through the entrance to Prasat Muang Tam 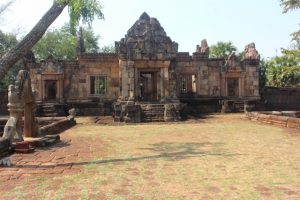 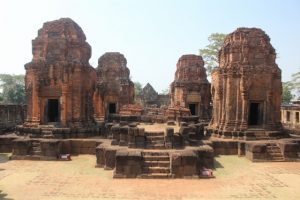 the four towers inside, and the fifth, collapsed one in the middle 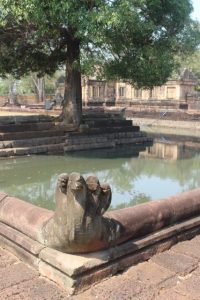 one of the pools surrounding the sanctuary 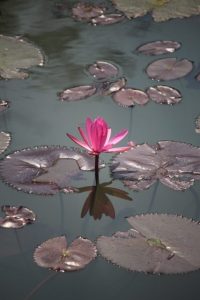 and one of the water lilies, introducing some colour 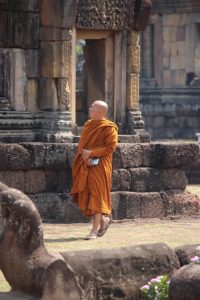 and unexpectedly, even more colour 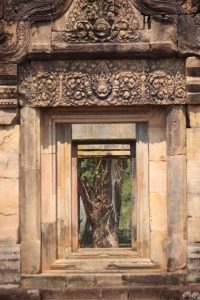 several doors to the tree

Alternatively, one could move to Prasat Muang Tam, the third Khmer temple we explore; Muang Tam means ‘lower city’, as opposed to Phanom Rung, five or ten minutes by car and situated on top of the volcano. We did, and we encountered, once again, a very impressive complex, somewhat smaller, and markedly less popular with the locals, perhaps because there is no tall central temple here. Instead the main courtyard contains five lower towers, of which the middle one has collapsed over time. What is nice here, too, are the four ponds that occupy the corners of the courtyard; some even have groups of pink water lilies. Altogether, these temples are, each of them in their own way, fabulous examples of a forgone civilisation, tastefully and unobtrusively restored by the Thai. 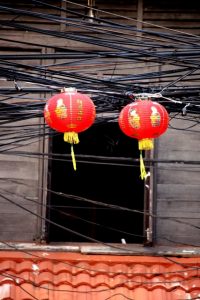 which is dominated, somehow, by cables 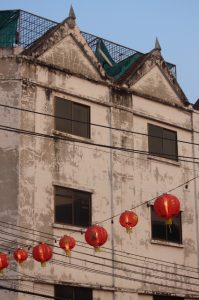 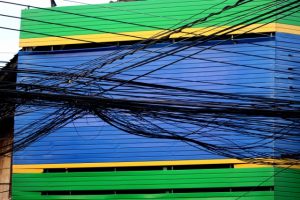 like here, too, in front of the only colourful front 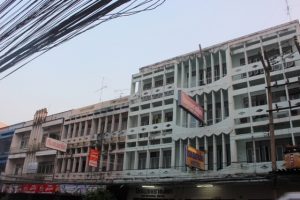 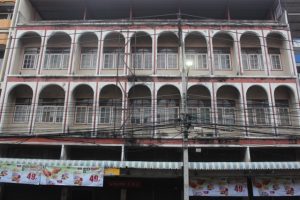 Korat – Nachon Ratchasima – itself is, to put it mildly, less of an architectural highlight. The centre of the city, surrounded by a moat, looked inviting, but in the end proved to be a collection of 1960s buildings in various states of decline. I have to admit that I like this type of buildings, concrete colossi desperately trying to show some distinct detail, whether in the balcony or the gables, or anywhere really, without being able to shed the impression of ugliness. Despite it being Saturday, the night market was a sorry affair, and not because of the opening of the Korat International Art and Culture Festival the same evening, which was attended by no more that 20 or 30 people. Far more attention was given to Thao Suranaree, 19th Century heroine of the city, who is honoured with a – rather small – statue at the central square, where lots of people come to pray and make offerings of incense and flowers, asking Yamo, as she is affectionately known, for luck. 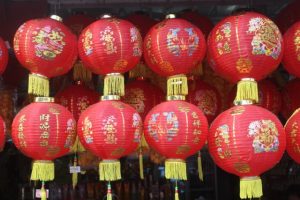 only the market is real colourful 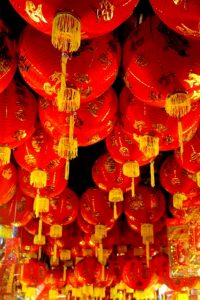 with laterns in the run-up to Chinese New Year 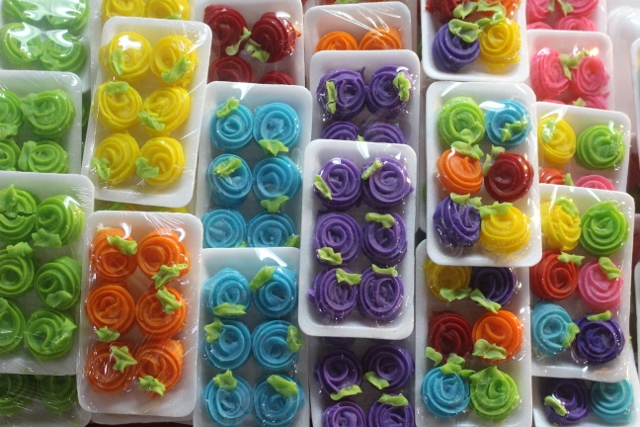