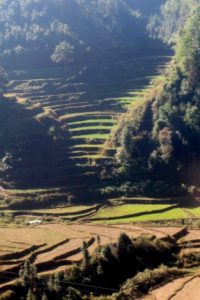 terraces along the long road from Tengchong to Jinghong

On the challenges of moving from A to B in China, and those of communication to achieve that.

Having seen enough of Tengchong and Baoshan, and getting fed up with the cold – beautiful blue skies all along, but evening temperatures dropping to 4-5 oC, and mornings only slowly warming up – we were ready for our next destination.

We were heading to Xishuangbanna, China’s most South-East Asian county, still part of Yunnan. Xishuangbanna borders Laos and Myanmar, and is populated by various ethnic minority groups that have more in common with their brethren across the various borders than with the Han Chinese. The capital of this area is called Jinghong, a good starting point for our Xishuangbanna exploration.

But how to get there? You can fly, obviously; all Chinese cities, including Tengchong and Jinghong, have airports these days. But flights go via Kunming, and from what we had seen so far, with pretty long lay-overs, and altogether not cheap (that one achievement of post-development, budget airlines, hasn’t fully penetrated into China yet). Besides, the road from Tengchong to Jinghong is described as truly off the beaten track, into the essence of rural China. My plan was to do the trip in three stages, to avoid too long stretches of bus travel on one day. First day 8 hours to Lincang, then 6 hours to Lancang, and finally 4 hours to Jinghong, that’s what I had calculated, roughly. Tough, but with the comfortable Chinese buses of today not too bad. And entertaining views guaranteed! 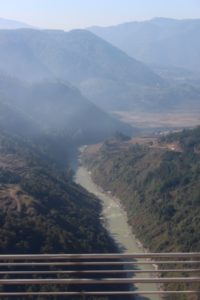 early on we cross the Nujiang again, by 2.5 km long Longjiang bidge 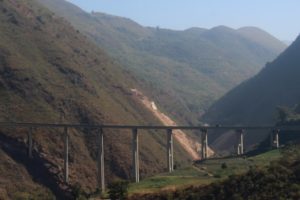 some of the engineering works outside Tengchong 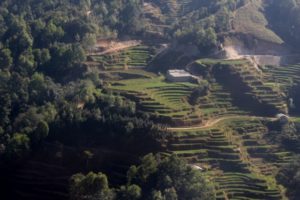 The staff at the bus station was very helpful, and had some excellent news. “Yes, there is also a direct bus to Jinghong, leaving 10:40 am, and arriving 20:00”. That’s what they wrote down on a piece of paper. Hmm, almost 10 hours, quite long, but then, if we can do it in one go, still overseeable and no night travel, why not? Saves us a few days, more than enough to recuperate. A few more questions, does it go via Lincang, for instance (we wouldn’t want to miss the scenic road). “Yes, Lincang”, and she noted down a few more locations, all in Chinese characters. Deal. After all, comfortable buses, beautiful scenery. And if it goes so fast – our 20 year old guide book quoted 72 hours for the trip! -, the roads must have been upgraded significantly, which further adds to the comfort of travel. 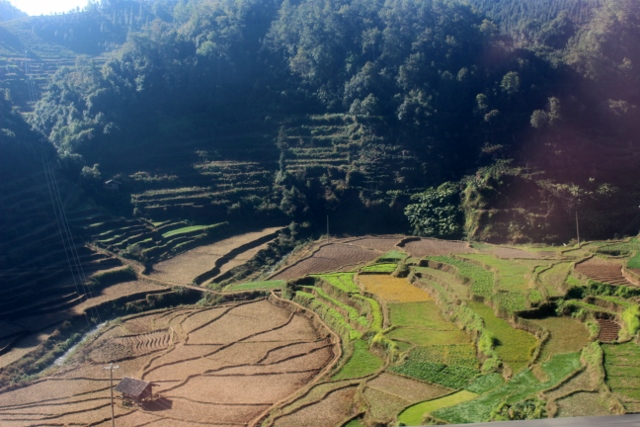 agricultural land is a colourful patchwork 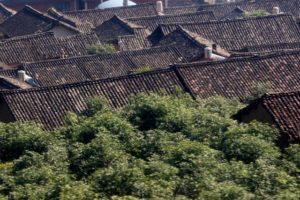 there are some villages along the road too

So the next day we bought our tickets, boarded the indeed very comfortable bus, and off we went. Only to stop five minutes later, to load some fruit baskets. Well outside the station, so probably a side business of the driver. Soon, we were underway again. To stop yet again, now for almost half an hour, at a roundabout, waiting for a chap with an envelope. Another side business, perhaps? Finally, just after eleven, we left Tengchong. And stopped an hour later: lunch time, almost 45 minutes. Well, maybe 20:00 will become 21:00.

a sea of plastic sheeting, the ‘plastic’- houses

A fellow passenger, a young boy who spoke a little English, said he had to go to Lincang. “How far is that”. “Six hours”. Good, fits well with the schedule, Lincang is just a bit further than halfway. And indeed, at about the right time, a little early even, we pulled into the bus station of a pretty big town. Must be Lincang. It is just that the boy didn’t get off. Maybe we had misunderstood, after all, there is significant room for misunderstanding in communication, even with my Mandarin-speaking travel companion on my side. And for once, we were not disappointed with the scenery, which was indeed spectacular at times, steep mountain valleys, agricultural terraces, the same ‘plastic’-houses as we saw earlier, small white-washed villages. The road was good, the traffic fairly light. We couldn’t believe our luck, getting to Jinghong so smoothly. 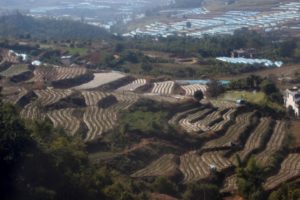 another look at the agriculture works

A compromise could probably be that the bus would, for the last two hours, take the new motorway. Not so scenic as my preferred route, but he, if it saves several hours drive! But there came no motorway, and three hours later we were still on a two-lane road. But towards eight, we did reach a big town, this must be Jinghong, no? Marvel at the punctuality of the Chinese!

So far almost every piece of text along the road had been in Chinese characters, not a word of English. But there it said, clearly… Lincang General Hospital. Lincang? We had reached no further than Lincang? When the bus stopped, the young boy happily wished us a pleasant journey, and got off the bus. Six hours had turned into more than nine! Or wait a minute, had he perhaps meant that the bus would arrive at six ‘o clock, not six hours after departure? A common point of confusion, in talking English with the Chinese. Then we were only two hours late. But equally, we were still only half-way! And then we started realising the horror scenario: maybe there had been another miscommunication, too. When the bus station staff had written down 20:00, that was not eight ‘o clock, that was 20 hours bus ride!! 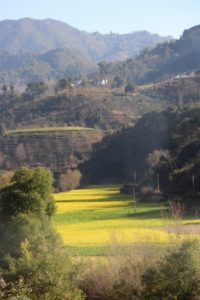 and a different colour, yellow

A long story short, the bus kept on ploughing through the dark. No scenery anymore. The bus never got to the motorway, but did take my preferred scenic route. Well, preferences can change remarkably quickly. By now, the comfortable Chinese bus was also not so comfortable anymore. Just before twelve at night we were stopped at a military check point, where it took half an hour to clear us foreigners. At two, the bus stopped altogether, somewhere along the road, for a few hours’ sleep. At 09:00 am the bus reached the bus station of Jinghong, almost exactly 20 hours after departure. Marvel at the punctuality of the Chinese!

It rained in Jinghong. 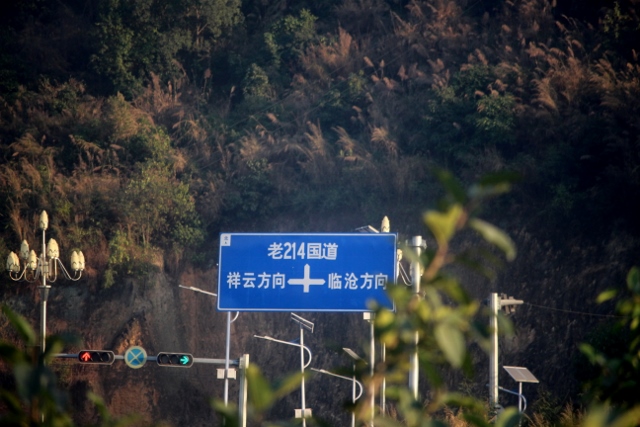 214 km perhaps? Who knows, but we think it is actually route nr 214 – an illustration of the challenges

6 Responses to 10. the marathon