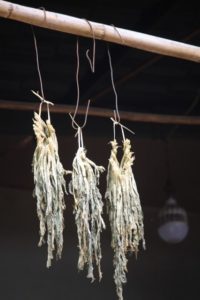 The third and last entry on Xishuangbanna visits some of the minority villages around Jinghong, and ends at New Year’s Eve.

By noon the market was winding down again – which created an even greater traffic chaos. We escaped, and went to see a few villages in the neighbourhood. Here, too, we have to adjust our romantic ideas about authentic villages. Some villages, like a Dai village specialised in paper making, is entirely made up of new houses, many with bright blue roofs. Even in a more remote, and obviously poorer, Akhe village there is more concrete than wood around; development, in the form of comfort for the local people, has clearly arrived. The clothing, too, is driven by comfort rather than tradition, and minority dresses are rare; the young have mostly given up, only some older women still wear them. Late afternoon we returned to Jinghong again. Finally a full day’s work! 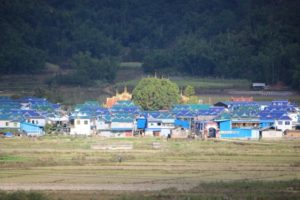 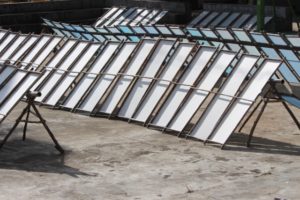 in every corner, every street, paper is being dried in this village 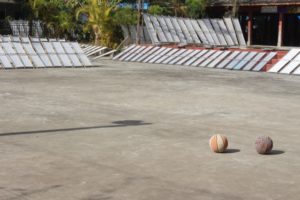 even the basketball court is being used to dry paper 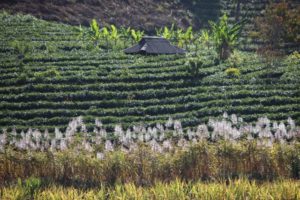 tea growing on the slopes 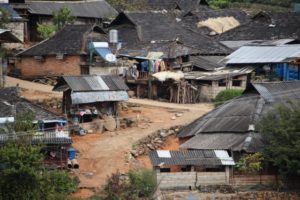 an Akhe village, poorer than most other villages we visited 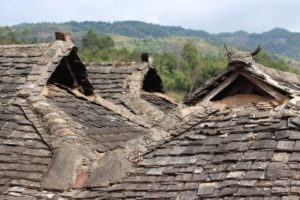 but here we find the original roofs back, finally! 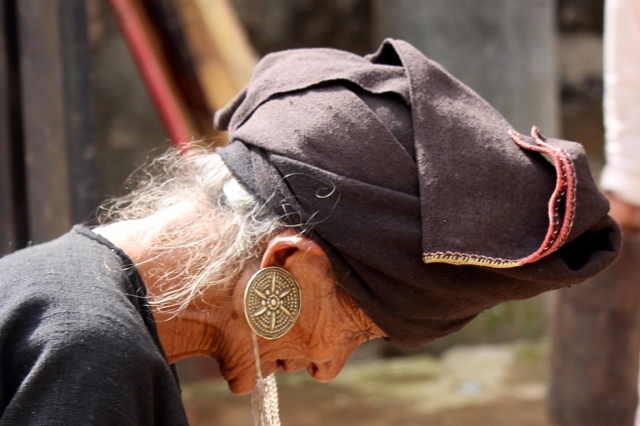 and an old Akhe lady 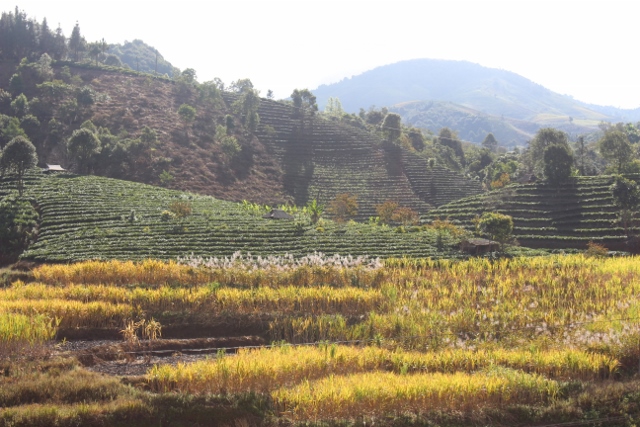 more tea slopes on the way 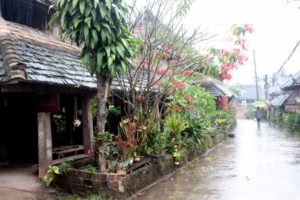 the charming tourist village of Mengzhe, in the miserable rain 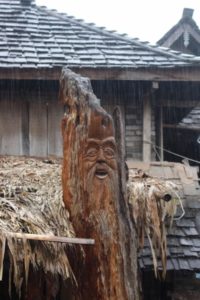 wood sculpture in the village 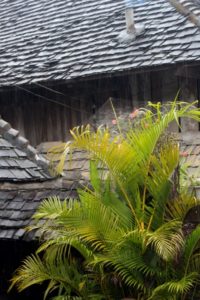 and plants, doing well with all that water

Which cannot be said of the next day. Full of good intentions we headed out, once again with our driver-guide, to Mengyang, a village north of Jinghong. It was pouring down the sky. Mengyang looked drab, the streets deserted. Not much fun here. Driver-guide took us, instead, to Mengzen, “a really traditional village”. With a parking place outside big enough for 50 tourist busses. Of which there were none, of course, it was still pouring down. To be fair, the village was quite charming, lots of wooden houses on stilts, well maintained, with room for pottery and papermaking classes, and with several handlooms, on the ground floor. And with the usual tourist trinket shops – entirely geared towards tourism. Which has its advantages. We hadn’t left the car for two minutes, still in the pouring rain, or a woman came running after us with two umbrellas for sale. You wouldn’t have had that in our romantic view of an authentic village! 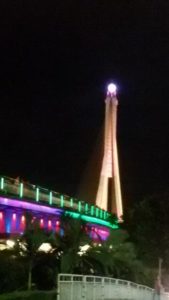 the bridge over the Mekong at New Year’s Eve 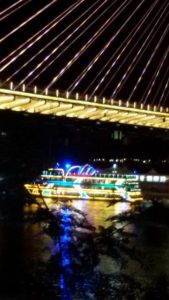 and real Chinese entertainment, audible on our terrace

We gave up. We got back to Jinghong before lunch, still in dreadful weather. Late afternoon it cleared up a little, enough to have another beer on a terrace along the Mekong, where we returned later for our New Year’s Eve dinner, a sumptuous meal with fish, very black mushrooms and banana flower. We could have opted for a two-hour cruise on the river, with real Chinese entertainment, but we settled for a place with Karaoke, instead, also real Chinese. And whenever the Karaoke stopped for a moment, we could hear the Chinese entertainment from the cruise boats on the river.

next day, time to move to Jianshui 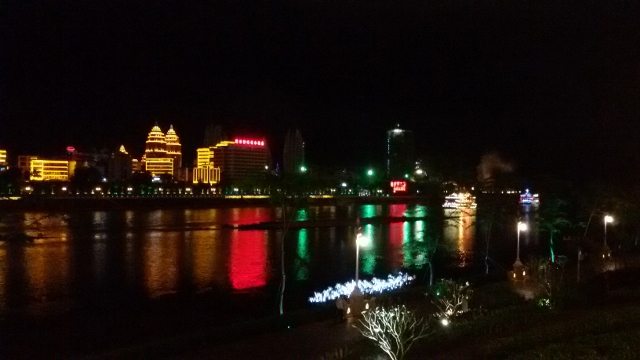