little railway station along the NE line in Thailand. between Nong Khai and Nachon Ratchasima

From the Thai border crossing at Nong Khai we travel by train through the Isaan, NE Thailand.

We are back in Thailand, where we started this journey. But for the first time we are in Thailand as travellers, not just for a quick stop in Bangkok or the beach. Nong Khai, across the Mekong from Vientiane, is not the most exciting place on earth, with the inevitable sleaziness of a border town, but it is a convenient entry point into the Isaan, the name that represents the collective NE provinces of the country. And the Mekong-side does provide a couple of pleasant hang-outs, and even a boulevard-like stretch where people do evening dance classes, or just a little strolling. 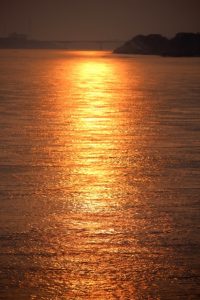 sunset from Nong Khai, with the Friendship bridge border crossing in the distance 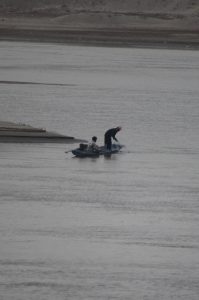 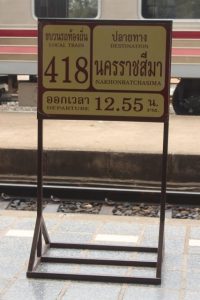 our train being announced 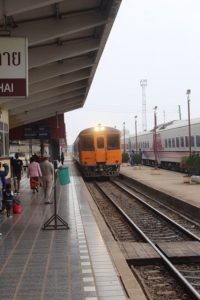 As means of transport we have settled for the train, this time. Thailand has quite an extensive rail network, with lines radiating from Bangkok to the south, the north, and the northeast, the latter ending in Nong Khai. Thai trains, we read, are notorious for being late, except when departing from their station of origin. As trains don’t go any further than Nong Khai, this could be considered station of origin for the return journey, right? Not our train, which arrived more than half an hour late, to turn around immediately, back to where it came from. We were on the third-class train to Nachon Ratchasima. Stopping at every station in between. Every five or ten minutes, or so. For seven hours. 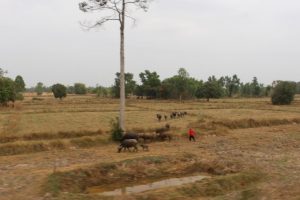 countryside view from the train 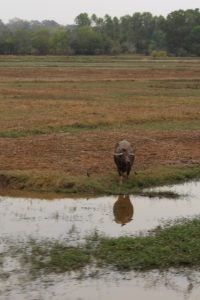 and another one, water buffalo 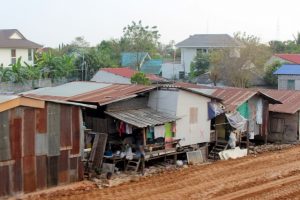 slum-like living conditions near the tracks

And yet, I like traveling by train, even by local slow train. It beats the bus hands down, if you are not in a hurry. Comfortable, even in third class – although after seven hours every seating becomes somewhat painful -, you can get up whenever you want, walk around. Hawkers are selling food and drinks, and there are good views of the landscape outside, especially because we were on the open window aircon system, again. Not that the landscape is very attractive, all flat, with rice paddies and other agriculture, interspersed with the occasional water buffalo and cow. But I suppose we are looking at an authentic piece of Thailand here. 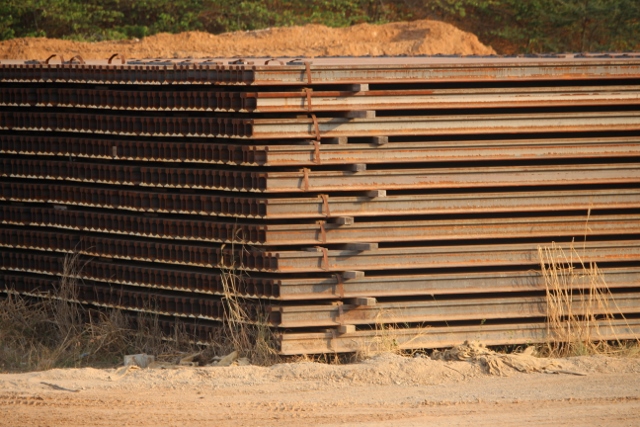 and new rail track, ready to be laid