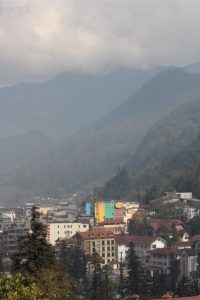 Sapa town, in a rare moment of sunshine

Wintersport-like Sapa is not the most exciting place in Vietnam, especially in miserable weather.

Our first stop in Vietnam is Sapa, a former French hill station at an elevation of 1600 m, established to escape from the heat of Hanoi. But in January, during a wet and cold spell – apparently not that unusual for Northern Vietnam -, the height works against us, clouds once more obscuring any view of the surroundings. And rain turning Sapa into a mud pit, the potholes in the centre overflooding, cars splashing the water sidewards, motorbikes – and ourselves – negotiating the water streams running down from the sloping streets, and road works further adding to the misery. It is close to freezing at night. 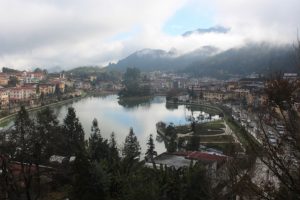 the small lake in the centre of town 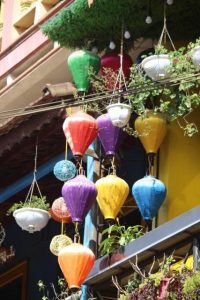 another rare moment of sunshine 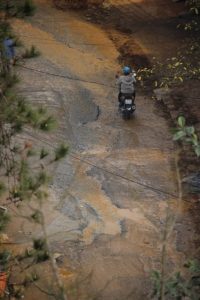 but most of the time, the mud is running through the streets

Downtown Sapa is a small lake, an even smaller square, a church, a market place and three or four streets, all lined with hotels, restaurants and massage parlours. French officials have long been replaced by tourists, and from hill station Sapa has turned into a tourist town, with the feel of a winter sport centre, but then without the snow. We do try to explore the town as much as possible, during the occasional sunny spells, but for most of the time we are driven inside again, by the cold and the rain. 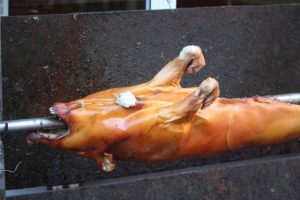 food is available, too, in Sapa

The highlight of Sapa is perhaps its Saturday evening, with an outdoor market of garments, bags, shoes and other unlikely products, and lots of young people come to town, for fun, and for flirting – this is the ‘love market’, where relationships used to be forged, although nowadays, with too many tourist cameras, the courtship is done elsewhere. The winter sport atmosphere is enhanced by a foam canon that spreads something snow-looking, attracting more enthusiastic, selfie-taking youngsters, whilst some music and dance is performed in the back. The local entrepreneurs surround the scene with food stalls, and do excellent business. Unfortunately, this Saturday evening it starts raining again, the market goods were quickly covered by plastic sheeting, and the games played in the centre court of the square end early. 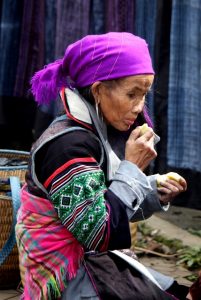 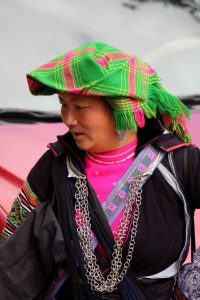 dressed with the stuff they try to sell to tourists 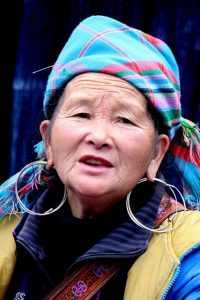 or perhaps, not these earrings 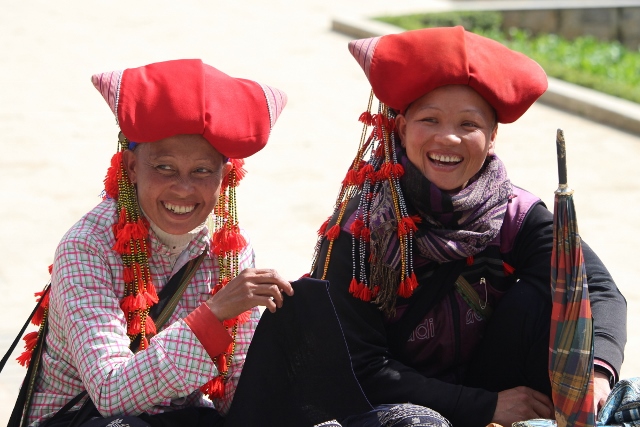 they are generally a happy lot, and enjoy being photographed – they are also not too persistent 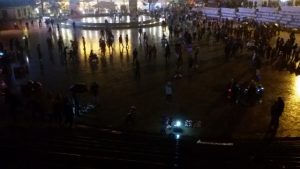 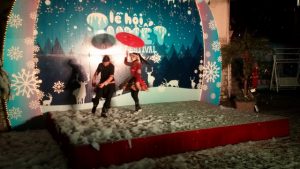 and a show in the nearby snow palace 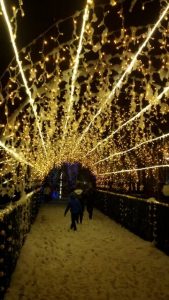 where a foam canon has created a snow-like atmosphere 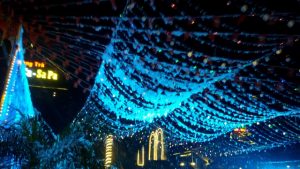 as if the lights have been frozen

Sapa itself has nothing that is worthwhile, but it forms a base for visiting ethnic minority villages and local markets, and for treks varying from half-day village and rice paddy walks to multiple days serious climbing to Fan Si Pan, Vietnam’s and Southeast Asia’s highest mountain – a trek which, we found out later, can also be done by half-day cable car and funicular railway to the top and back. (Had we known this in time, we would certainly have undertaken this trip – and, unprepared as we are, we would have died from hypothermia in the process.) Obviously enough tourism attraction to justify the ongoing construction of ever more hotels.

next up: activities around Sapa 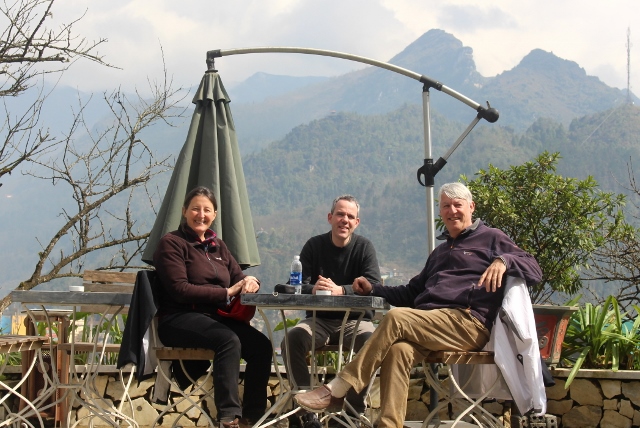 these haphazard tourists enjoy their first outside terrace of the week, and in some cases of the entire trip so far – another rare moment of sunshine

One Response to 19. Sapa