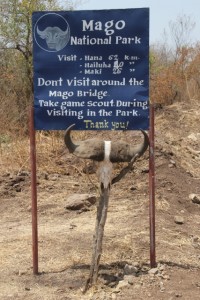 entrance to the park: the park logo nicely recreated

A sad affair in terms of wildlife, but good for birds and insects, and for the Mursi, of course. 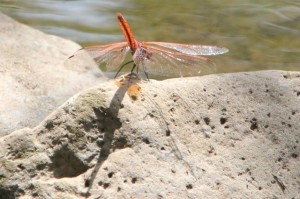 game viewing along the river

In every national conservation strategy the one thing to avoid is to have National Parks in which pastoralists are grazing their animals, this just leads to continuous conflict between the interests of the pastoralists and the wild animals the park tries to protect. 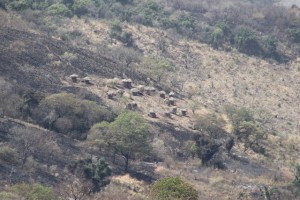 a village inside the park, and evidence of villager behaviour: the area around the village has been burned off

The Mursi, pastoralists, live in the Mago National Park. Although various sources, including our guide, claim that there are still many mammal species inside the park, we only saw sporadically a dikdik, a klip springer and the occasional kudu – a adult kudu and a young, interpreted by our guide as a Greater Kudu and a Lesser Kudu. No other large animals. Perhaps the dense acacia woodland, by far dominating the landscape at the expense of small patches of open savannah, has something to do with this. The fact that the Ethiopian government is now constructing a major road through the park, won’t help either. 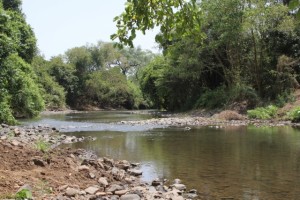 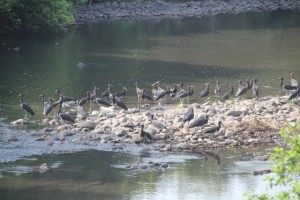 birds in the Mago River 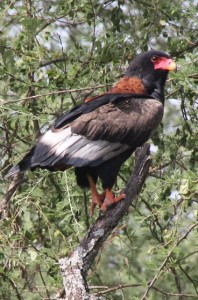 birds aplenty, and quite some special ones

Yet the park, mostly flat and located at the bottom of yet another part of the Great Rift valley, supports at least a fine bird population, which we enjoyed. Unlike the Mursi, they didn’t mind being photographed, some even posed for the camera, it seemed, and all for free.