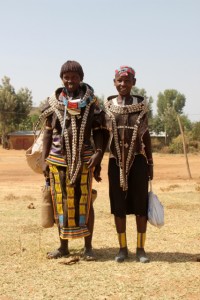 two Hamar arriving at the market

Market town with too many tourist souvenirs, but also with attendance of large numbers of genuine tribal people.

In between Weyto and Jinka is the town of Key Afar, which is famous for its Thursday market. So we, – and with us all the other tourists in the entire South Omo Valley region, it seems -, congregated at the market, which is really a sad affair, from a market perspective. In terms of goods, like vegetables, or chicken, eggs, pulses etc, there is very little on offer, and in very small quantities. The main commodity seems to be tourist knacks, crudely carved wooden sculptures, beads and other decorative objects – the same we had seen on the people we passed on the way –, and pots and gourds. The few things we do like are so outrageously expensive that we quickly abandon the negotiation process – and then we get the same reaction as so often, indignation and hurt pride, how dare we refuse their art works. The basic concept of commerce, supply and demand, hasn’t penetrated here yet, and us not wanting to buy against asking price is interpreted as white exploitation of blacks. Really! The idea that us paying the asking price would be black exploitation of whites, no, that doesn’t catch on. 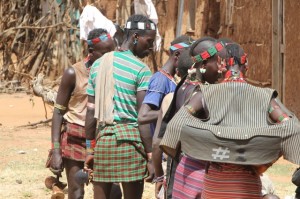 Hamar (or Bena?) men at the market 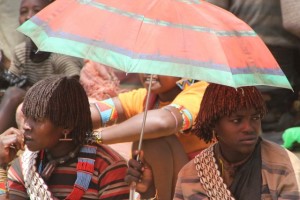 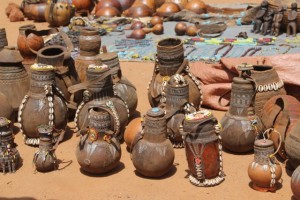 the dominant trade in the market is pots, no doubt original and authentic…

However, markets like these are great to observe the tribal people, who attend the market in large numbers. Key Afar is mostly Ari territory – and many Ari towns-people actually wear Western dress -, but Hamar and Bana people also come to town. Women have obviously been told to wear a T-shirt, but for the rest they, and their male compatriots, are everything you would expect from a minority group, exquisitely dressed and decorated. 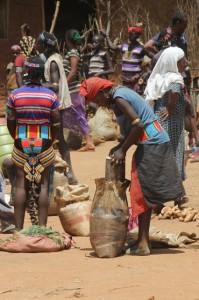 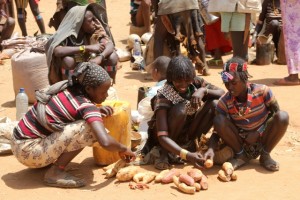 and more potatoes, but always in small quantities not sure about the origin, and objective, of this woman