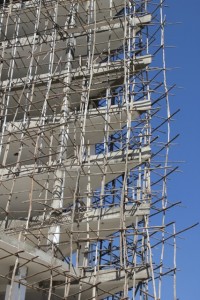 A somewhat disappointing introduction to Ethiopia, Addis Ababa is an unattractive city with run-down museums, but a fascinating market.

Addis Ababa is a huge city, not particularly pretty. There is not really an old core, the town has been established only a little over 100 years ago, in 1887, and has been added to afterwards, by the Italians who invaded Ethiopia in the run-up to the Second World War, and quite likely also by the Derg, the communists who overthrew emperor Haile Selassie in 1974, and their allies. Lots of buildings have this Soviet-era look: functional architecture, euphemism for square box devoid of any fantasy. Not pretty. There is the city center, with offices, and two areas where most of the hotels and restaurants are, the Piazza – as the name suggests established by the Italians -, and a newer area around Bole road. Neither is attractive. Large avenues connecting the various neighbourhoods are somewhat busy, lots of taxis – every model Lada ever made – and mini-buses, but few heavy trucks. 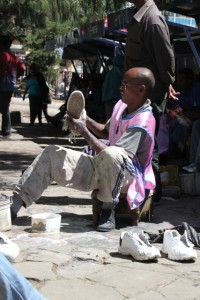 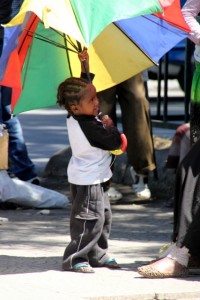 As in so many developing country capitals, the streets are full of people of every walk of life. There are shoe polishers everywhere, in rows on the pavement; interestingly, as many people wear sport shoes these days, the shoe polishers have branched out into shoe washing. Really, bucket, brush and soap! Most disturbing are the beggars, especially the lepers among them, something I thought wasn’t of these times anymore. And those with an arm missing, or a leg, you cannot fake that. And the old, they have no safety net, no social security. Then there are the opportunists, those who cross the street at the sight of a ferenji – a foreigner – to put up their hand. And there are those who want to strike up a conversation with the foreigner, often with good intentions, occasionally not. And then there are all those casual pedestrians who seem to continually study all the pockets you could possibly keep money in. 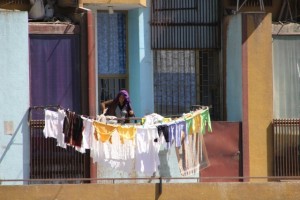 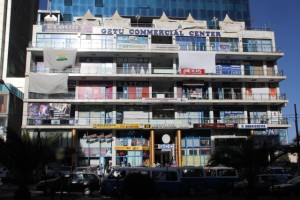 the ubiquitous Coca Cola kiosk, present all over town 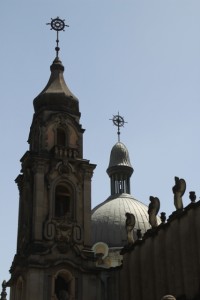 At 2400 m altitude, the climate is very pleasant, solid sunshine throughout the day, yet not too hot. And, according to the guide books there are a few things worthwhile checking, including the claim that Addis Ababa has some very worthwhile museums, and a number of interesting churches. But all the churches we tried to visit where closed, even on Sunday (admittedly, we came well after mass had finished, but still). And the museums, well, mixed feeling here, too. The ethnological museum was touted as perhaps the best museum in Africa, and if there is one subject that would interest us, it would be ethnological. But the museum, on the first and second floor of one of the former emperor’s palaces, looks run down, some of the vitrines were empty, the impressive chandeliers at the ceiling only had one or two candlesticks working, half of the spots illuminating the artefacts had burned. Most importantly, the artefacts were just not as impressive. Many of the small shops where you buy souvenirs seem to have a better collection of drums, pots, pans and baskets. 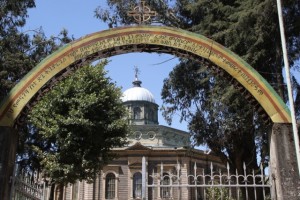 The other museum, the National Museum, just down the road, was a bit the same, large empty spaces where obviously exhibits had been in the past. The skull of Lucy – a replica – was interesting, but mostly because she seems to have a similar status here as the Mona Lisa has in Paris: impossible to get close because of the many other people trying to get a glimpse (while the rest of the museum is virtually empty).

All together, somewhat disappointing, our first impression of Addis Ababa. Except for the Mercato Market, of course, subject to a separate entry.