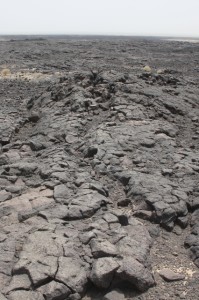 Another village, spring board for visiting the Erta Ale volcano, in some of the most desolate landscape you’ll ever see.

The way to Erta Ale leads first to the village of Dodom, once again a real village in the middle of nowhere. Dodom even has a school, and other brick buildings, not everything is corrugated iron like the few other villages we have come through in the Danakil Depression. Outside Dodom, stone structures that are likely to be graves.

But the area around the village is some of the most desolate landscape I have seen, yet attractive in its uniqueness. Black stacks of basalt, and what can be recognized as lava streams – solidified black stone not unlike asphalt – as far as the eye can see. You can just imagine this as it originally was, a liquid flow of molten rock, irregular undulating surface, perhaps not unlike waves, which then rapidly cools off at the top, the surface exposed to the air, whilst inside the lava is still liquid, and hardens much slower. Big cracks have appeared at the top of the crests, where further cooling has broken up the surface. Occasionally, white sand fills in the irregularities of the surface, and in the distance there are a few white dunes. So once in a while the shape of a volcano appears at the horizon. 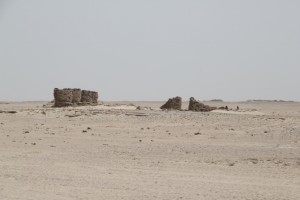 graves on the way to Dodom 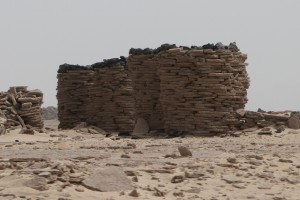 just a stack of stones, decorated with black lava pieces on the top 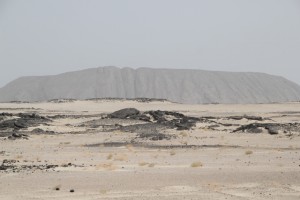 a volcano in the distance 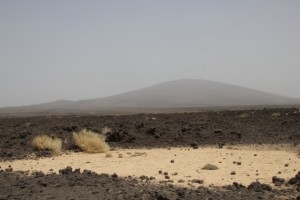 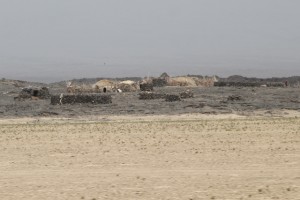 From Dodom runs a rough path across irregular rocky surfaces to a camp – small stone huts – at the base of the Erta Ale volcano, on the way passing some other, much bigger volcanos like Amaytole and Boreale, mostly just vaguely visible in the haze of the hot day. 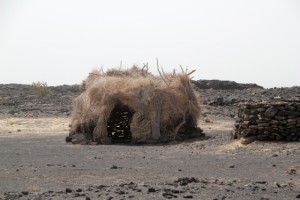 part of the camp at the base of Erta Ale

The camp is filthy. Rubbish is everywhere, paper and plastic are fluttering in between the huts. Inside, there is rubbish in the corners, plastic bottles – especially the broken ones, which have no economic value anymore -, rusty tins, more paper. One of the huts has been used as a toilet by a previous visitor, who couldn’t be bothered. Disgusting, really.