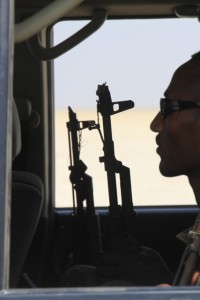 one needs a police escort going into Danakil

One of the world’s hottest places, but with a surprising number of natural wonders.

If the Afar region is already inhospitable, what would the Danakil Depression be called? It is not only the lowest point on the African continent (116 m below sea level), not only the hottest place on earth (34-35 oC, on average (!), and hottest temperature ever measured, at 64.4 oC, or so it is claimed). It is also one of these places without any infrastructure, no roads, no towns, forget about hotels. 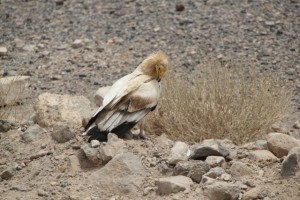 some vulture preparing himself

Danakil is the heart of the Afar region, bordering Eritrea, but more than that, it is a geographical and geological museum, complete with an emerald-coloured salt lake fed by hot springs (Lake Afrera), a working volcano (Erta Ale), razor-sharp rocks of salt as well as an actively mined salt deposits, and the most spectacular sulphur deposits I have ever seen (Dallol).  And for the rest, it is a never-ending expanse of desert interspersed with lava, in thick black stacks of blocky layers or in the form of irregularly-shaped solidified flows. No shade. No water. 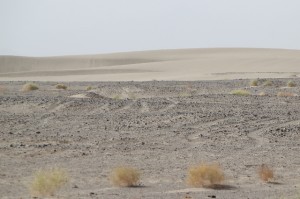 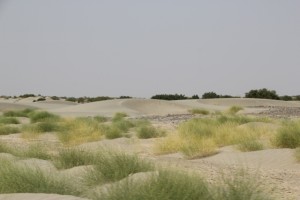 dunes between Dodom and Hamed Ale 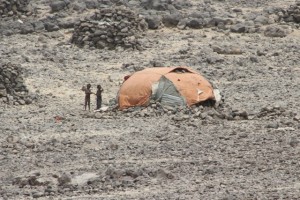 more huts in the desert 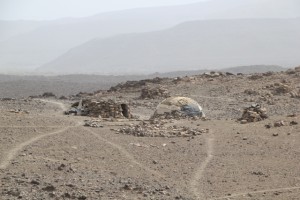 huts in the middle of nowhere

Most incredibly, there are still people that live here, herding cattle. The occasional camel train passes through, carrying salt blocks. Small round huts have been perched onto the hard rock, or into the soft sand. A village appears out of nowhere, with a real school. No area, not even the Danakil Depression, is uninhabited, in Ethiopia. 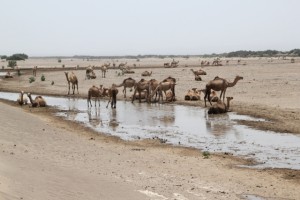 camels drinking from a salty pool in the Danakil Depression 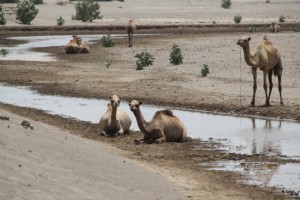 camels resting next to the pool 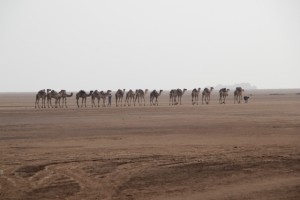 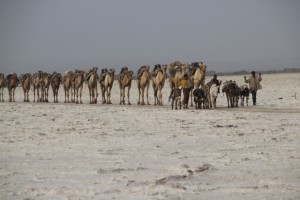 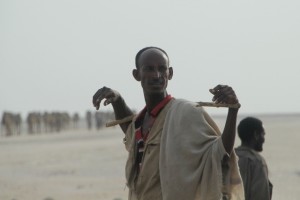 One can enter the Danakil either from the south, turning off the main Addis Ababa – Djibouti road just past Semera, or from the west, from Mekele and via the village of Berhale. The Ethiopian government is busy upgrading the road between these two entry points, no doubt because it allows them to then quickly mobilize military forces should the tension with neighbouring Eritrea flare up once more.