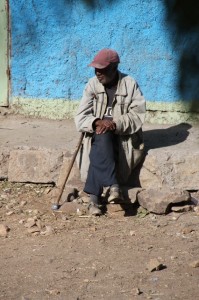 man in the sun

Kombolcha is a convenient base to visit several markets in the area, including its own, and those of Bati and Senbete. 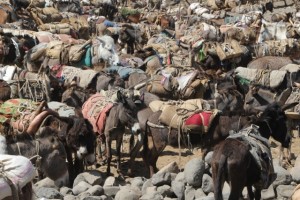 We had come to base ourselves in Kolbolcha, strategically positioned to visit several famous markets back-to-back, the Sunday market in Senbete and the Monday market in Bati, presumably the biggest market in the country after the Merkato, but definitely more colourful, with people from various ethnic origins coming together. 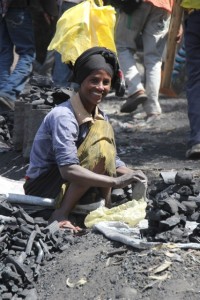 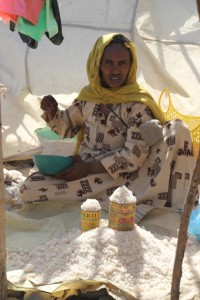 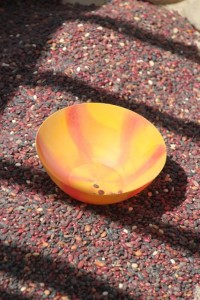 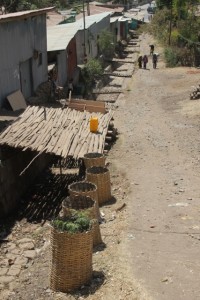 your average street in Kombolcha

In the event it turned out that Kombolcha also has its own market, on Saturday. Especially entertaining because the people here are so much less used to tourists, they are friendly and curious, and they have great fun over the photos I take and subsequently show them on the LCD screen of my camera. Here too, an animal section where cows – and those enormous longhorn bulls – and sheep and goats are being traded. Being the only foreigners, again, we were looked at with as much curiosity as we displayed ourselves for the people and the animals. Most impressive was the parking lot, where traders leave their camels and donkeys, and the occasional horse. Complete with traffic jam from the continuous coming and going of donkeys, and sometimes whole trains of camels. The charcoal is traded separately, and for the rest everything else is for sale in the general market place, similarly chaotic as in Aksum, but a little more colourful thanks to especially the women wearing bright dresses and head covers. We easily lost ourselves for a couple of hours, wandering in every direction, from spices to baskets to pulses to chicken – in that respect the offering of goods was much the same. 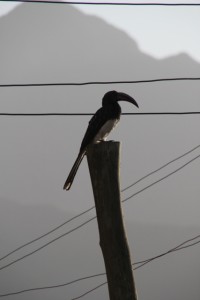 hornbill at the hotel 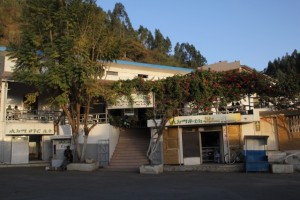 For the rest Kombolcha proved pretty basic. However, totally unexpectedly our hotel, the Hikma Pension, turned out to be a gem of a hotel, with a brand new and clean double room, hot water, huge satellite dish, restaurant and broad veranda, shaded by trees and Bougainvillea, and super-friendly staff.