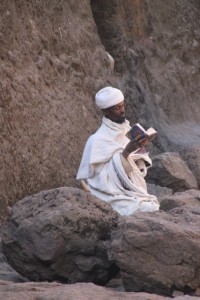 Lalibela is still active as a spiritual centre 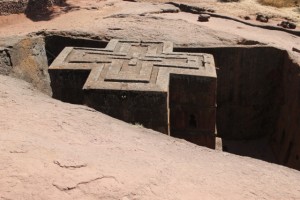 top view of the church of Saint George, perhaps the most spectacular church in Lalibela

Lalibela has indeed a couple of fabulous assets, in the form of 11 (or 10, or 13, depending who is writing the guide-book) rock-hewn churches. But not just hewn into the rock, like in Petra (Jordan), for instance, no, these have been excavated: many of these churches are free-standing, all the rock around it removed, then the inside of the remaining monolith opened up, hollowed out, and finally exquisitely finished, with door openings, windows, arches, pillars, sometimes decorated with reliefs and frescos. Like a real church, really, but then out of a single piece of rock. Quite an extraordinary sight, and certainly ranking amongst the great architectural achievements of the world. But more than a sight, unlike for instance the Pyramids, or Petra, which I mentioned already, or perhaps the Angkor Wat temple complex – all tourist attractions in their own right, testimony of ancient rituals of a bygone era -, the churches of Lalibela are alive, they are actively being used by the local people, and by pilgrims from around Ethiopia; they are a truly spiritual place. And that, I think, is quite unique in the world. 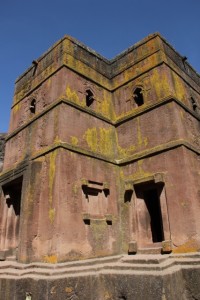 church of Saint George, free-standing and fully hewn out of the rock 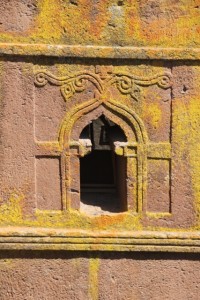 detail of one of the windows, essentially a hole in the rockface 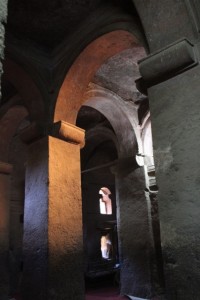 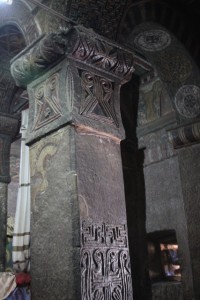 and decorated with columns, carved and painted

There is no point describing the different churches, there are plenty of books that have done this already, and much more scholarly than I can. I have added a few pictures, to give you an impression. What is interesting, though, is that they are all very close to each other. It appears that, within a sea of literally rock-hard basalt, there is a small patch of what is called scoriaceous basalt coming to the surface, a kind of volcanic tuff, and much softer to work with. And that explains it all, of course: hacking these churches out of true basalt would have been impossible; as it is, hacking them out of the softer stuff must have been quite an exercise already. 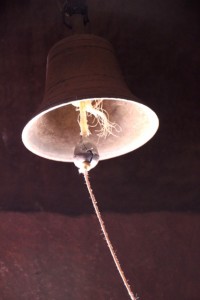 The problem with something so unique as these churches is that it attracts not only a lot of tourists, but also the tourist entourage that comes with it. Lalibela itself is a small village high in the mountains, with an agrarian population. Unfortunately, the tourist invasion has gotten the worst out of people, everybody is out to make a buck, and wherever you go, you are being hassled by not only kids asking for pens, T-shirts, or just straightforward money, but also adults. Hotel touts, self-appointed tourist guides, tacky souvenir sellers. Or just people walking up to you and asking “give me money”. And they know they only have one chance – tourists do not linger around in Lalibela – so they don’t take no for an answer, at least not easily. Add to that the infestation with flies – every time you say “no” you have to be careful not to swallow one – and walking through the village becomes somewhat tiring!