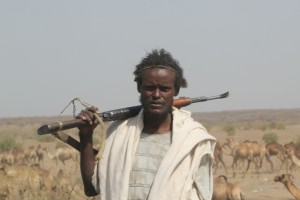 Desolate desert landscape flanking the Awash River, with little else to do than drive through on the way to or from Djibouti.

The Awash River follows its course north from Awash National Park, to Assaita, where it empties somewhere in the desert, never reaching the Red Sea or the Gulf of Aden. This is Afar Country, controlled by the Afars, an ethnic group that used to be feared for their rather inhospitable customs. Wilfred Thesiger, who traveled this area in the early 20th Century, remarked that “all that mattered to these people was to kill, how they did so had little significance”. The Afar, too, tend to castrate their victims as proof of having killed a man. 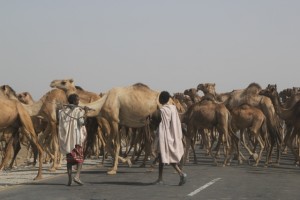 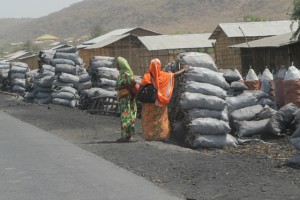 charcoal is a major product here 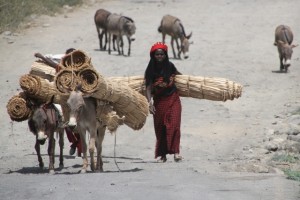 in the river area, bamboo mats are also an option

Times have changed, and what is left of the Afar region now is a sparsely inhabited, hauntingly black volcanic landscape, turning increasingly dry the further north we come. The vegetation, if there is any at all, is low acacia trees and shrubs, the ones with sharp needles capable of penetrating a car tire. The only viable business seems to be charcoal production, although occasionally, closer to the river, the land turns into wetland which allows for some agriculture, and for bamboo to be grown, used for mats. For the rest, large areas are entirely empty, no people, no animals – and then, suddenly, there are a few huts again, small round huts. No idea why these people are here. No idea what they are doing here. The occasional camel train crosses the road, well over 200 camels, probably. But for most of the time, basalts dominate. Hard to believe that this is where – as the Ethiopians claim – “it all began”: this is where in 1974 the then-oldest hominid fossil, 3-4 million years old Lucy (after She who was in the Sky with Diamonds) was found. The fact that there are now quite a few older fossils does not diminish the Ethiopian enthusiasm for Lucy, even though, I have been told, there is absolutely nothing to be seen at the site (I didn’t go and check). 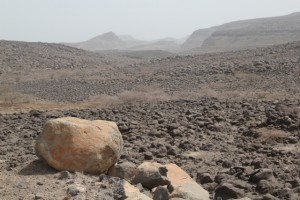 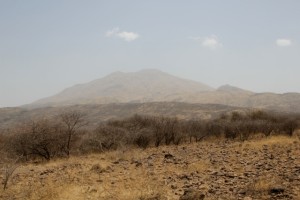 Mount Ayalu, one of the first volcanoes traveling north

Near Gewane, itself not much of a town, there is the Mount Ayelu volcano, right next to the road almost, beautifully showing ancient lava flows on its slopes. An unforgiving, hot landscape where you don’t want to get stuck.