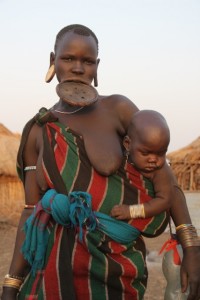 Opportunistic approach dominates what could have been a unique ethnic experience with the Mursi tribe.

Probably the most famous of the tribes in South Ethiopia are the Mursi, on account of their women, who distinguish themselves through their profound lip-plates, large clay plates that they insert in a hole in their lower lip. The stuff you see on the front cover of the National Geographic; the stuff you never imagine to see in real life, really.

The Mursi go essentially naked, save for a colourful blanket, either wrapped around the waist, as most women do, or loosely thrown over the shoulder, like with most of the men. I suspect a fairly recent addition to a men’s outfit are underpants – briefs no boxers -, but many haven’t acquired this piece of equipment yet (and it often shows). Women go bare-breasted, or partly covered, this largely depends on the size and position of the breasts. Children, well, nothing really, apart from some decoration, another impressive element of the Mursi culture. Many women wear stacks of bracelets on the arms, some have elaborate head-dresses. Apart from the lip-plates, many have insertions in their ear lobes, as well. Men also decorate themselves, with beads, earrings, the occasional body or face paint, and sometimes a colourful band around the head. Few have a lot of hair, and the little they have is often shaven in patterns. Men and women also have extensive marks on their bodies, from initiation rites or scarification in patterns, purposely creating scars by cutting the skin, and wrap it with charcoal so that the wound swells – this is considered a mark of beauty. All together, an attractive people, with a very basic life style centered around cattle herding, almost unchanged for centuries. (Well, attractive except for when the women take out their lip-plates, and are left with a huge hanging lower lip with a big hole in it, a rather unattractive sight, in fact. And for most of the time, they will not wear their lip-plates, which are heavy and uncomfortable.)

But to get to the Mursi? There are several villages in the Mago National Park outside Jinka. To get into the park you need an armed game scout, who will accompany you all the time. Not that there are a lot of animals in the park. To visit one of the villages, you obviously need a permit, and a mandatory guide – this is Ethiopia, after all.  The villages closest to Jinka are the most touristic ones, fully geared towards extracting money from visitors – plenty people who come for the day, take the pictures, and return to Jinka. At the advice of our tour operator we opted for a longer stay, in a village further away, necessitating a night camping out. The idea being that, once you have been in the village for a few hours, the people get used to you, do not bother you anymore, and you can get beyond the superficial contact, deeper into the culture. Well, choice was in fact limited, because there are, or so the story goes, only two permanent villages, all others are semi-nomadic and move from time to time. What is more important, the semi-nomadic villages have no police or army presence, and no formal structure, which means that they could easily turn in a free-for-all. This works as follows: tourists pay the Mursi money to take photos of them, the Mursi then drink it up, get drunk, start a fight, and become even less uninhibited when it comes to appropriating other people’s goods. So really, there are only two places where one can camp, one on this side, and one on the far side of the Omo river, and with the coming rainy season, there is really only one, if you don’t want to run the risk of being cut off, for hours, days or weeks, as soon as it rains. 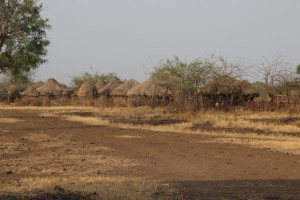 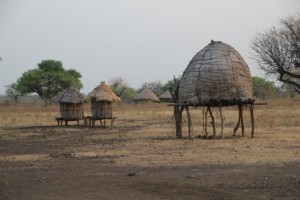 and storage platforms, to keep food from the animals 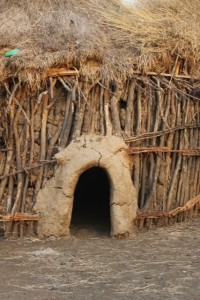 Good, to Hailuha, thus, the only village on this side of the river which is safe to camp. The best spot is the yard of the health clinic, but the head doctor, or somebody, was concerned that people would start demolishing the tent during the night, so we were advised to camp in one of the class rooms of the local school, as long as we would move out again before 8 am the next day. So we cleaned out the class room – which looked more like a pig stead –, put a tarpaulin down and our bedding, and that was that.

In the mean time, a short stroll through the village – remember, they need to get used to us? – focused mostly on the conversation regarding photos, and what I had in my pockets that they could get to: pens, money, water bottles. My wife was better off, she could have a conversation about bras – or more precisely, whether the women could have her’s; after all, the Mursi go almost naked. Any other communication was difficult, especially because each attempt was immediately cut down to a number between 2 and 5, the amount of birr (the local currency, 2 birr is about 10 cents) it would cost to take a photograph. This was going to be a tough one; for instance, initially we understood that the woman with the baby had five children, and the one on her back was her second child, but no, it cost 2 birr to photograph the child, 5 birr to picture her. The fact that we didn’t carry any cameras – we had left them inside the school, after all, this was a trust building exercise, no? – did not noticeably reduce the single-mindedness of the conversation. 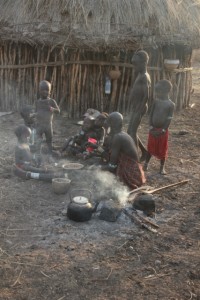 dinner time in the village After an hour, or so, we decided to retire to the school, for a while. We had firmly answered every question regarding photos with no (or naiji, in Mursi language), but this did in no way affect the insistence of the people – mostly women and children -, they just continued offering their pictures;  and we still had the same group around us as from when we started our stroll, plus a whole lot more. 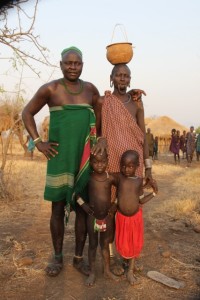 the chief and his wife, and some of his children

At the end of the afternoon we went out again, now with camera. We thought to visit the village chief first, after all, you need to get the important ones on your side, no? Mistake. The chief was really only interested in my shirt, or any of my shirts. And he wanted his picture taken, together with his wife and whatever children were around. For the standard price of 3 birr, per person in the picture.  But once the process of taking photos had started, a real hysteria broke out, everybody was pulling my arm to get my attention, push themselves in front of the camera, 3 birr for me, 2+2 for me and my friend. Off-putting to say the least, and embarrassing, yet when, after a short while, I decided not to take any more pictures, they became even more insistent; girls would take off their cloth and show their breasts, in the hope I would change my mind, and with their cloth, the price dropped, too. This was not just off-putting, this was disgusting. Surrender every piece of human dignity for the prospect of collecting a few lousy birr from the foreign tourist. And sad, too: I don’t buy the poverty argument, these people have been able to live without money for centuries, it is nothing but greediness.

We got back to our school, cooked our meal, went to sleep, and checked out the next morning, without taking the camera out once more. At least now we know how they get these nice pictures on the front of the National Geographic. 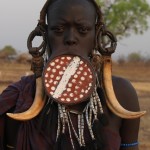 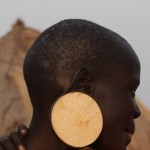 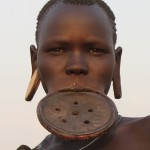 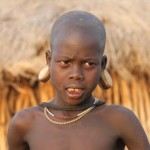 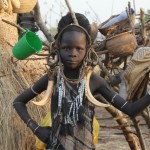 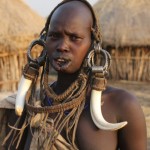 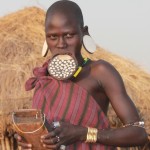 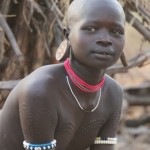 One Response to The Mursi