the rain the job

One of the things that still reminds everybody daily of the disaster is the large amount of rubble all over town, from collapsed buildings and houses. One element of the strategy to get people out of the camps is to clear their plot from rubble, and put a transitional shelter up (people are very reluctant to leave their plot, as land ownership is either vague, or the land their house was built on is government-owned, and thus anybody’s grab if they move off). Guess where the rubble ends up? On the road in front of the collapsed house, which makes it more and more difficult to negotiate especially the narrower streets of Port-au-Prince – one critical element about Haitian traffic is that one should never, under no circumstances, reverse one’s car to clear a traffic jam, that would be a terrible loss of face; this becomes increasingly challenging if half of the road is covered with rubble. But what do you do if you clear your plot, where else do you leave the rubble? (what to do if you encounter another vehicle is easy, you just edge your way past, thereby mounting the pile of rubble slightly, which thus becomes more spread out, making it easier for the next two cars to pass each other.) 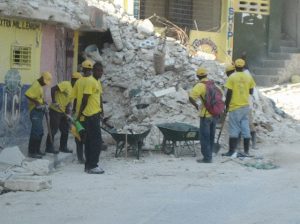 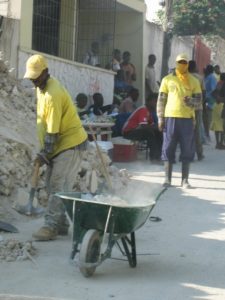 well protected against the self-generated dust, too!

Everywhere in town you see the cash-for-work crews, teams of up to ten people who have been issued with wheelbarrows and shovels (and colourful T-shirts proclaiming who pays them) to clear rubble, but without trucks the rubble is effectively moved from one side of the street to the other, and back the next day again. At least that is what it often looks like.

Clearing of larger buildings has also started in earnest, and here heavy equipment, including trucks, is being used effectively. Big Caterpillars are smashing up damaged buildings, and lift the rubble in trucks to be removed. The totally destroyed Ministry of Education, for instance, has now been totally removed as well, without a trace. And other buildings are going the same way. The government has allocated eight sites for rubble dumping, officially, but it remains to be seen whether this is going to be respected or not. Much better would be if perhaps the rubble could be pulverised, and re-used in the rebuilding of the city afterwards, but this requires additional, expensive equipment. It is however encouraging that the person who managed Ground Zero clearing in New York has apparently been mobilised – sorry, deployed – here, too. 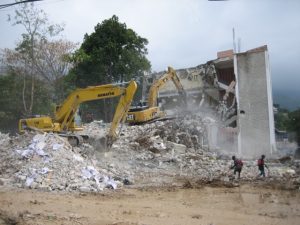 this is more professional, building being demolished 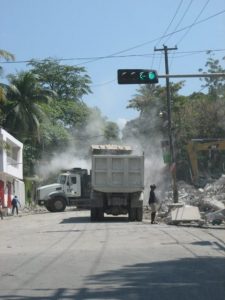 and rubble being taken away by large trucks

But the task is going to be enormous. It is not just the buildings that have collapsed, it is also those that have been damaged, and are now unsafe to enter, that have to be removed. It may well be half of the city, or more. And we haven’t even talked about other towns yet. Before we can start rebuilding, there is still a lot of demolition to be done.