the break-in the schools (photos)

Having adopted a subtitle for this blog earlier, “random contributions to the better understanding of Haiti in the aftermath of an earthquake” (or should I say: the earthquake), I should perhaps get back to business again, after some recent digressions.

The most pressing issue here at the moment is forced evictions. There have been several instances where IDPs (remember? Internally Displaced People, the people in the camps) have been evicted from the areas where they had set up their tents and tarpaulins. Of course this is totally unacceptable, people have nowhere else to go, and they do have some rights (although, interestingly, IDPs don’t have many, under international legislation). But look further, and the issue becomes quite complex, as with so many issues that we have to deal with. 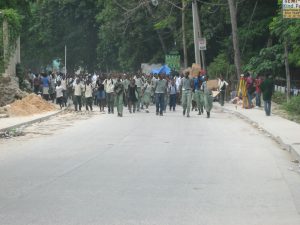 demonstration of school children demanding their school back 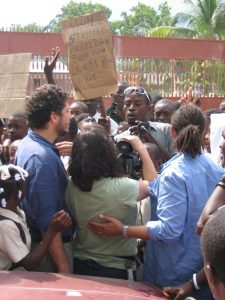 I happen to run into this demonstration whilst showing a BBC Panorama crew around; they loved it, of course!

Take the schools: the government has decreed that schools must open again on 5 April, and many did, or did in the weeks thereafter. But many of the large schools have large school yards, too, and as with every piece of free space in Port-au-Prince, this has been occupied by IDPs. There is certainly a case to be made in favour of children that need education, as otherwise they may not pass their exams at the end of the schoolyear (which in any case has been extended to mid August, to make up for lost time). Children have no doubt: they have taken to the streets to demand the removal of IDPs and re-opening of their schools, and even demonstrated in front of the Ministry of Education last week (how they do that I don’t know exactly, as the Ministry has been totally destroyed by the earthquake, and has since been cleared of rubble, there is nothing left).

More dubious are the claims of municipalities that life has to return to normal, and that thus the municipal football pitches need to be evacuated, the football season is about to start again. Stadiums are popular camp places, as you may have seen from previous installments, and are public land. Perhaps we need to accept that we skip a season, we as humanitarian community are definitely advocating for that. In any case, compensation is underway in the form of the Worldcup, coming summer, an event that transforms this country. And then there is the case of private land owners, who have land that normally yields an economic return, but is now unusable. They surely have rights. As far as I am concerned, and I voice that frequently, we – the government, donors – should reimburse the land owner for the use of his land as temporary shelter camp for IDPs, it cannot be difficult to establish a fair price. Or is it? There are also land owners who keep land for speculative purposes, yet others have a claim to the title of the land which is not entirely clear, or contested. Do we reimburse these people? Who do we reimburse? 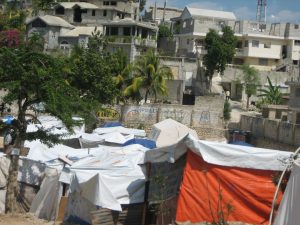 clearly, the stadiums here in Petionville, are still occupied, no chance of a football match here soon; imagine what the pitch looks like – but then, that may not have been much different before. 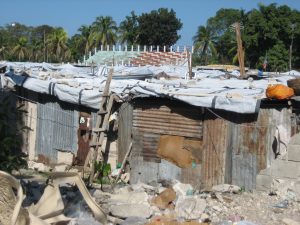 and the stadiums, here in Leogane – note the stands at the back, stands since the seats have been removed for one of our child-friendly spaces – also occupied.

You see, things are never clear-cut. For the time being we have achieved a moratorium on forced evictions, verbally agreed by the president – but not yet formally published. This means that, in principle, the police cannot be used anymore for evictions from private land. Of course, anybody can just hire a gang to do the job, and even if this was against the moratorium, what are you going to do if you have just been thrown out of the camp where you have lived with everything you have, for the last thee months. Are you going to go back? Are you going to protest? Where do you seek justice? We are now pushing for this to be clarified, but chances are that by the time we have everything in place, the two months may be over. Better to start thinking about solutions, like let’s inventorise the school problem, let’s develop options for the people that have to move – give them a package, offer relocation to Corail, the site near Cabaret that I have written about before -, and let’s make moving away from the camps attractive by offering services in their neighbourhoods, to encourage them to return, at least for the 50% or so whose houses are still OK. Better to start thinking ahead of the challenges that are still to come, and define timely responses, well before we are confronted with the need for emergency measures.

next: the schools (photos)