the camps the decongestion

You all now know what IDPs are, and in Haiti we have two types, really, we have the ones in the camps – I have written about those quite a lot – and then we have the ones that have left Port-au-Prince after the earthquake. Immediately after the disaster many people had no place to stay and nothing to eat, and decided to look up family or friends in the country side, or in other towns, undamaged. The government encouraged this, and laid on free bus services to transport these people, some 600,000 in total, to wherever they wanted to go, in an attempt to decongest Port-au-Prince. More about that in a future episode, today I want to talk about Save the Children’s response to this situation.

We have long recognised – mind you, “long” is a few months, in this context – that we need to do not only programs for people that are living in the so-called directly affected areas, the areas where buildings have collapsed and services interrupted, but also in what we call the indirectly affected areas. All those people that moved to the country side put an enormous strain not only on their family, who are usually just as poor as their visitors – and hospitality demands that they provide food and lodging, even though they have nothing to spare, and even though this then goes at the expense of buying seeds for the next planting seasons: you can already see the spiral pushing everybody into even more dire poverty. The IDPs also put a burden on local services, like schools and clinics that are not prepared for the extra influx of people, and collapse under the additional demand. We can do something about that, but, to be honest, we have been so busy with our direct response program – and so understaffed – that we have not done much yet.

If you think that I am now going to elaborate on what we are going to do, you are wrong. The only thing we have done so far is identifying areas where there are many IDPs that have left Port-au-Prince, and one of these is the South East Department, close to the border with the Dominican Republic. There is a small village called Thiotte, where we are contemplating setting up a sub-office for such program, but nobody has really been there, to decide what would be logistically most efficient. The perfect job for me, over the weekend: try to reach remote Thiotte to see what is the best supply route, either a grueling 5-6 hours drive across the high mountains from Port-au-Prince, or an even longer, 7 hours drive over impassable tracks to Jacmel, also in the South East.

So we equipped a heavy-duty 4×4 vehicle, with sat-phone, GPS receiver, extra tires, mosquito nets, plenty of food and water – and a bottle of wine, peanuts and olives for the Saturday evening in a remote village. And then we set off, on Saturday morning, for the adventure trip. Right! Get a map of Haiti, and follow the tarmac road from Port-au-Prince north and east to the DR border, a good road into the Cul-de-Sac. This is a flat sugercane growing area in between the mountain ranges, with a few shallow lakes, and for the rest mostly semi-desert-like vegetation, low scrubs and cactusses. 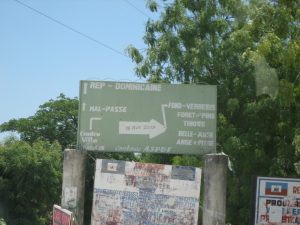 the start of the adventure, the turn off from tarmac into the mountains!

Just before the border we turn right, and the real trip starts, into the mountains. In fact we drove on a good, no, excellent earth road, part of it a dry river bed, beautiful scenery on all sides, with bare mountains, the occasional waterfall. Plenty of people around. Funny enough they don’t call you ‘blanc’ here, so close to the Dominican Republic, but ‘blanco’, they have obviously picked up some Spanish. After a while we do get higher, and we get a view of the plains to the east – it looks like the mountains are Haiti, the low land is DR. Still plenty of people, plenty of supplies if we would have needed any: in the event we are just on our first energy bars, even before we have touched the thermos with coffee, when we pass Fond Verettes, the town around half-way. OK, village, in fact we almost missed it. 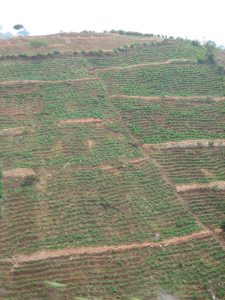 agriculture in the mountains is an incredible effort on steep, terraced slopes 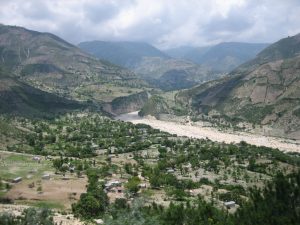 the scenery in the beginning, dry river beds and bare hills 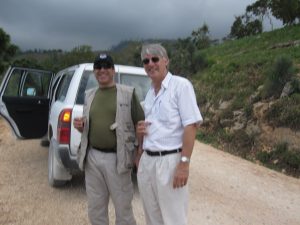 the adventurers, next to their well equipped 4×4, ready to rough it! Next to me is Johnny, my flat mate and our security adviser (there were rumours that the gangs that escaped from the Titanic prison had holed up in the mountains here…) . The driver, who took the picture, was still shaking from the road. 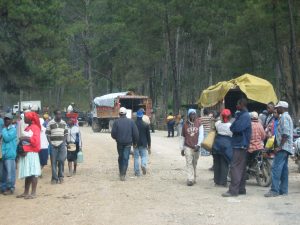 market in Foret de Pins, at around 2000 m high a really cool place, literally – which is why so many people are wearing warm cloths the market dos not only attract people, donkeys and horses are also present in large numbers – the preferred means of transport 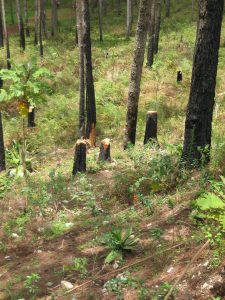 unfortunately, not all of the Foret will survive – it is in any case already amazing that this forest still exists, in a country that has been 98% deforested in a drive to produce ever more charcoal, and the pressure is on

The next village, Foret de Pins, was hard to miss, not only because we did find ourselves suddenly surrounded by pine trees – calling it a forest would be pushing it, but there were still plenty of trees – but also because of the major Saturday market. The dominant means of transport here is donkeys, and it showed! But where all these people were coming from beats me! Anyhow, still an excellent road, no difficulties negotiating the mountains, at over 6000 ft, driving in the mist, and then, before we realised it we were down again, in the banana vegetation and the coffee plantations of Thiotte. Less then four hours drive, easy, with multiple stops on the way. 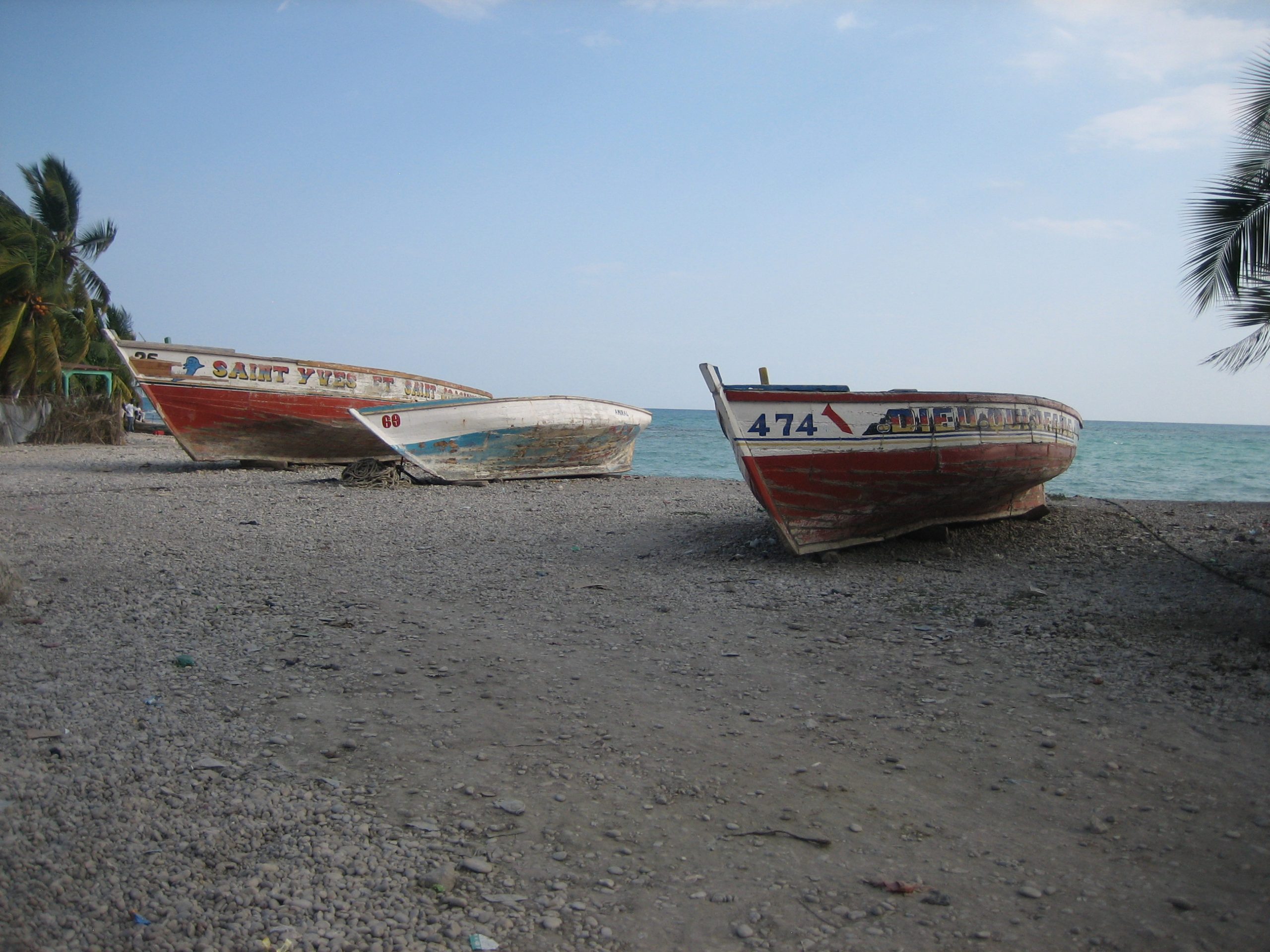 the boats on the beach of Belle Anse, the first time we reached the coast after the mountain crossing 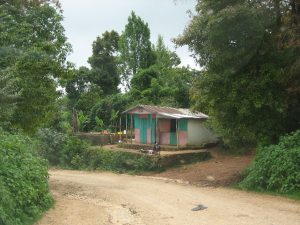 a typical rural house in the Thiotte area, and in fact the houses look very similar in the entire South East. And the road doesn’t look that bad, no? 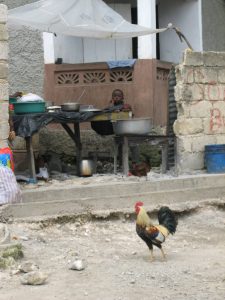 this looked to be the only restaurant in Thiotte, a really small and sleepy village with very little in terms of amenities. Dinner is walking in front of the restaurant. 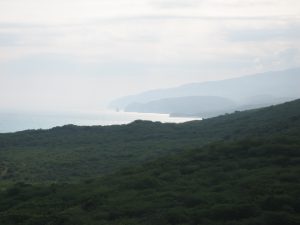 view from the mountains to the coast of Jacmel, very pretty and quite unexpected after a really bumpy ride on a very bad road

Are you still on the map? According to the local police officer in Thiotte the grueling seven hour drive to Jacmel, initially on the program for Sunday, would take us no more than four hours. So, having arrived so early, we decided to set off for Jacmel, knowing that there were plentyful places to stay overnight, in case we got stranded before dark. Belle Anse, at the southern coast, was in fact two hours, Marigot, indeed over a pretty bad road – the first time today that I would have been uncomfortable if I had taken a saloon car – took us another two hours, and 20 minutes later we arrived in Jacmel. Comfortable, air-conditioned hotel, with excellent restaurant, hot showers and swimming pool. Adventure? Anti-climax!

But it was a nice trip, with an incredible variation in vegetation over such a short distance, and a changing landscape every hour, or so. And plenty of food and water, and even energy bars, left for the leisurely trip back to Port-au-Prince the next day – the three hours direct route, tarmac all the way.

2 Responses to the adventure