the money the beach

I have been very serious, the last week, and I didn’t post many pictures, so let me change tack a bit, and share one of my funnier photos of the last few weeks. If you remember I have been talking in an earlier contribution about concerns regarding the road to Jacmel, which goes through the mountains, and has in places been badly damaged by the earthquake. The big issue was whether slices of the road would go, and even if not, whether we would be able to keep the road open throughout the rainy season, as many expected landslides from the weakened hills – and that would effectively cut off Jacmel from the rest of the country (remember my adventure getting to Jacmel via an alternative road? Well, trucks wouldn’t be able to do that, I think, given that some of the rivers we crossed must have swollen beyond recognition by now).

So I collected some pictures of the damage – the worst part, which I am happy to say has not yet collapsed -, and some pictures of the efforts to clear the road. With so much UN equipment in the country the road in fact has been kept open all the time, although it has been hard work. Whether the individual Cash-for-Work crews have contributed much, is the question, but then, the strange thing with CfW is that it does not necessarily need to achieve something other than putting money in people’s pockets. So they can buy food, replace lost assets, and stimulate the economy again. In any case wheel barrows cannot compete with heavy equipment, of course. But telling it is. Remember the need for Haitian leadership? 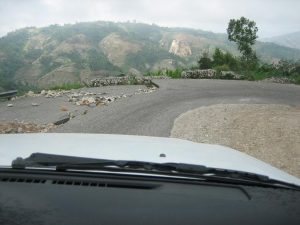 this is the worst piece of damage, which still may slide away one day, but so far it has been holding up. Not that anybody would test the left lane! 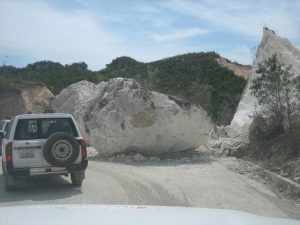 and this is from the early days, March or April, when big boulders were still blocking the road. These have now been removed 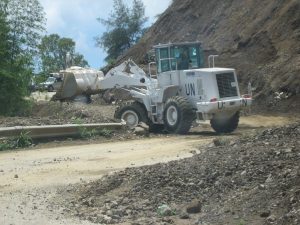 heavy equipment helps, of course, and there was plenty available from the UN, and earlier from the Canadian and American armies (who have all but left in the mean time) 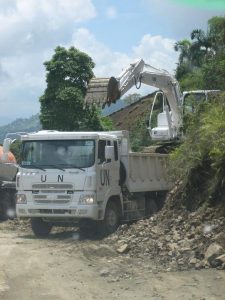 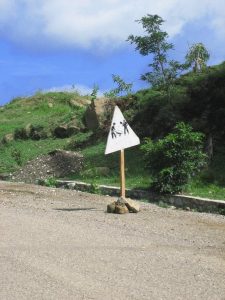 so we announce the next stage in road clearing, beware of wheel barrows! Isn’t it brilliant, the creativity of Haitians? 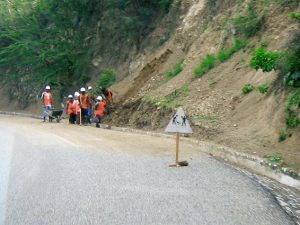 and sure enough, there they are, a Cash-for-Work crew with wheel barrows – but the idea of the second man putting something in them, that hasn’t caught on yet! 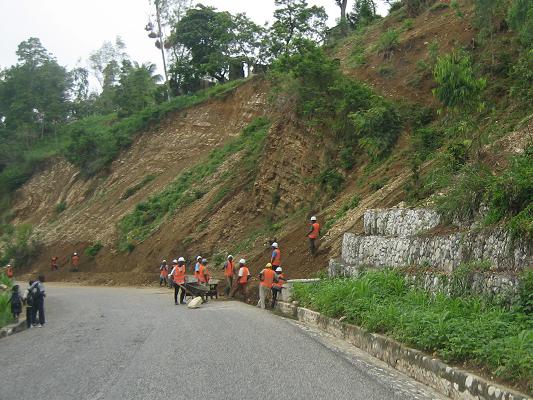 Really, I didn’t do it on purpose, but I just never saw a CfW crew that was working full steam ahead. On the this photo you can just make out one guy in the distance with a pick axe, and another guy pushing a wheel barrow in the front, but everybody else is looking at what others are doing. And that is pretty much the impression I have from all CfW crews (but it doesn’t matter, as I explained above – really). 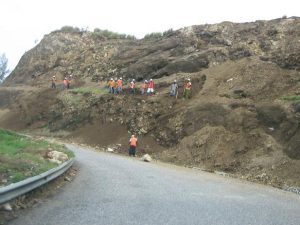