the fuel shortage the schools

Much has been made of the fact that the main prison in Port-au-Prince collapsed after the earthquake, which allowed more than 4500 prisoners to escape. My first reaction at the time was that there were in fact far more criminals outside the prisons in Haiti than that there were inside, but I may have to adjust this somewhat. It does appear that in 2006 and 2007, at the height of the kidnapping wave, a joint effort of the Haitian Police and MINUSTAH, the UN stabilisation force here, was very successful in rounding up many of the gang leaders and putting them behind bars. Apparently, Brazilian MINUSTAH troops fought an urban battle in Cite Soleil, from street corner to street corner, and gradually took control of this neighbourhood, Haiti’s most famous slum.

So the prison population did include the worst criminals. And they did escape, even though the prison – locally known as the Titanic – doesn’t seem to be that badly damaged (see photo). In fact, there is a lot of suspicion about the mass escape, as it appears that the inner walls, those that immediately surrounded the blocks of cells, have held up pretty well. Guards may have panicked, leaving their weapons behind, but that still doesn’t open the doors: it may well be that some guards actually helped the prisoners escape.

Whatever happened, the heavy criminals are outside again, and not many have been recaptured. One of the problems is that all the prison records have been destroyed after the earthquake, including photos of the criminals – just as strange as the escape: if most of the prison held up so well, why would the records have been destroyed? There was no fire, no cupboards or computers crumbling under collapsing walls, like what happened in some of the ministries. In any case, criminals are re-establishing themselves again, re-taking their territories – not always peacefully, to which the increasing number of gun battles in the slums seems to testify, after all a gangleader position doesn’t stay vacant for long (unlike some of the positions in our office, strangely enough). There is also a noticeable increase in crime, although I am not sure whether the explanation often used in newspapers and magazines writing about Haiti, simply blaming this on the great escape, is correct. The upturn in kidnappings is indeed likely to be the result of gangsters taking up their old trade again, armed robbery and car jacking too. Yet, the increase in petty theft is probably more related to the fact that people have a far more difficult time to make ends meet after the earthquake than before. And the high incidence of rape, once again blamed on all these escaped gangsters, is perhaps more to do with something that has been rampant in Haiti society from long before the earthquake: lack of respect for women, and for young girls, and plenty of sexual opportunism, currently enhanced by the fact that so many people live close to each other in densly populated and poorly-lit camps where many are strangers. Another reason to work on strategies to empty these camps as soon as we can. 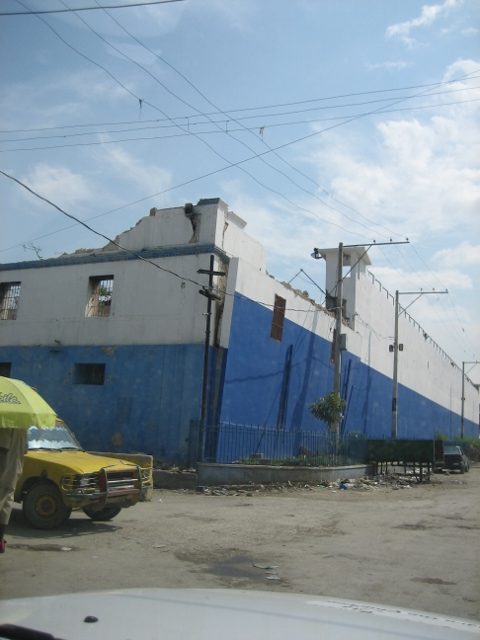 this is it, the Titanic, by far not as badly damaged as its more famous namesake!

2 Responses to the criminals