the distribution the rain

A particularly popular mechanism to stimulate the Haitian economy after the earthquake seems to be cash-for-work. This is an approach, used by many UN agencies and NGOs, to put money into people’s hands by paying them for specific activities. The way we do this normally is to invite a community to identify a project that needs to be done and ask them to put forward teams of workers, usuallyin groups of ten, to carry out this work. Projects can be rubble clearance, digging out the drains in anticipation of the rainy season, or anything else. We pay them 180 Gourdes per day, the equivalent of around US$ 5,-, which is some 10 to 20% below the minimum wage. If we would pay more, we would undermine the normal market mechanism to get people to work, and the cash-for-work schemes are really only meant to augment the labour market, in an environment where unemployment is very high and casual employment – day labourers – the rule rather than the exception.

Not everybody is wildly enthusiastic about this approach. An often-heard criticism is that agencies forfeit their responsibility to design and implement recovery and rehabilitation projects, leaving it to the local population instead. I am not sure about that argument, I have often argued for making people decide themselves what they want to spent their money on, although admittedly there are limits here, too: individual decisions may not always be in the best interest of an entire society, or even a family. A bigger risk, especially because there appears to be little coordination among agencies other than agreeing on the payment levels, is that such cash-for-work approach fuels inflation by pumping enormous amounts of new money into the society. Haiti is a dual-currency economy, using both local Gourdes as well as US dollars, so even without printing money, considerable damage can be done. I am not an economist, but it would be good to create some sort of oversight for this type of programs, and some form of analysis into its impact. Surely, there must be some level of cash input that would start to do harm to the still fragile markets not yet sufficiently supplied. 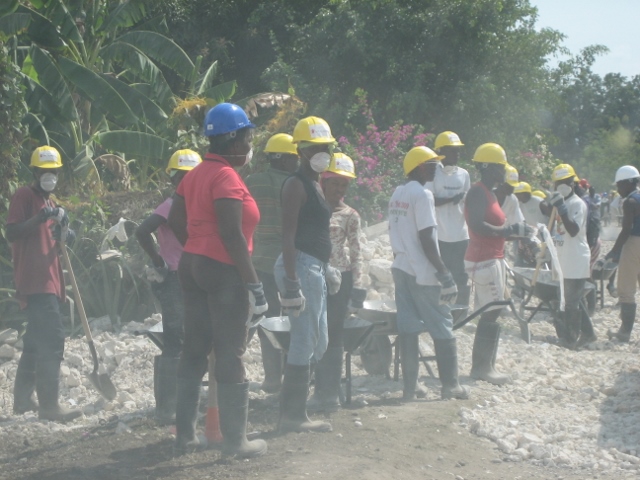 a particularly bad picture, taken through the car window, but it shows a typical cash-for-work crew, with distributed equipment including very uncomfortable boots and hardhats for no clear purpose – except for the T-shirts, most crews have conspicuous T-shirts telling the world who is paying these people. I will get some better photos, plenty of opportunities around