the engineering works the politics

A little heavy on photos, this time, but you must see this.

Corail is the relocation camp about an hour’s drive north of Port-au-Prince, close to the town of Cabaret. Attentive readers will remember that I have talked about this camp before – the ghost town -, it was created some six or seven weeks ago as an option of last resort for people who had to be relocated from some of the makeshift camps in Port-au-Prince, because they were in danger of flooding and mudslides once the rainy season would start.

Some 5,000 people are now living here; supposedly, all have moved voluntarily. This means that for these people they either didn’t have an other option, or the bribe was attractive enough, a small cash handout (approx. US$ 50), a new tent, a hygiene kit and the promise of free food for ‘a while’. And living in a model camp! Well, camp-wise it is indeed a lot better than any of the camps in Port-au-Prince, spacious tents, with a lot of room in between – still set up in rows, though, whilst there are much better ways to lay out a tented camp, in circles for instance, creating small neighbourhoods that promote more of a community feeling, and better protection against rape and other forms of sexual abuse. Never mind, there is still a sense of space. And there are plentiful new latrines, sufficiently far enough from tents not to be a health hazard – or a smelly nuisance -, and plentiful water bladders, which are being filled by tankers every day. There is a clinic, a child-friendly space, and soon there will be a school, Ministry of Education-willing.

And for the rest there is nothing.

Total misery? True, the people in the camp have nowhere else to go, presumably their houses have been destroyed, or they may have been renters in the first place, now without money to pay the inflated rents if they can find one. But outside the well-organised, well-lit, well-managed and well-provided Camp Corail another camp has been established, a camp of makeshift tents, – by far not as nice as the Chinese-made cylindrical tents -, pitched on unstable slopes, with no facilities what-so-ever. Camp Obama, say some, in an attempt to beef up its importance, but otherwise referred to as the other camp, populated by anywhere between 5,000 and 8,500 squatters, hopefuls who reckon that sitting so close to the source of distributions, one day they may get in and benefit as well. One day they may belong to the lucky ones in Camp Corail. Really. Total misery indeed. If you have nothing, and you have nothing to loose, even Corail looks a great opportunity. 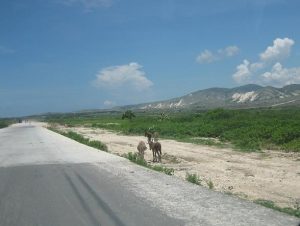 the road to Corail, if you look carefully you see the cactuses. This is semi-desert, just some scrub is growing here, but nothing else. Even the donkeys are unimpressed 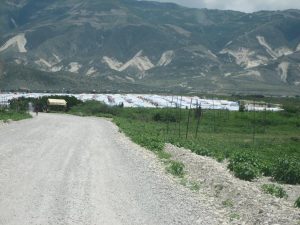 and there it is! Coreil! Hurray, hurray 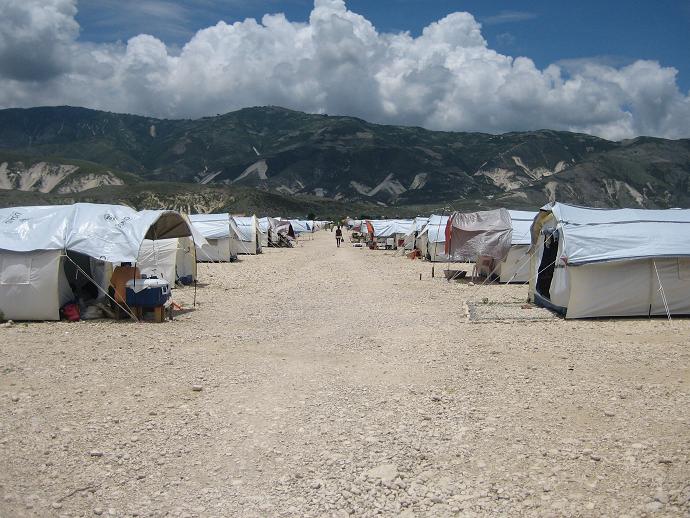 look at the size of the tents, and the space in between them, the broad avenue. You haven’t seen anything like this yet, on the photos of other camps I showed you, no? 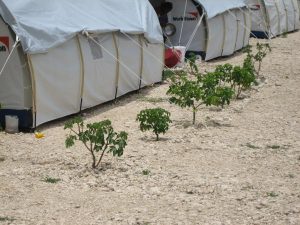 obviously, people feel at home already, and start to distinguish their tents from others, even grow trees in anticipation of shade 20 years from now 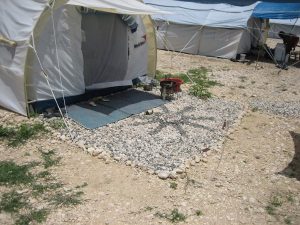 they are here to stay, so much is clear! 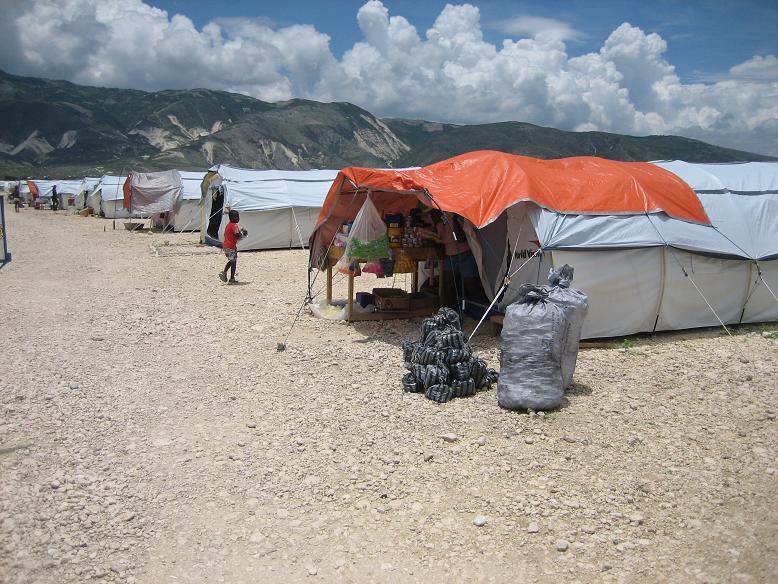 and Haiti would not be Haiti if somebody would not have started a shop, or some other business, there is a hairdresser (no, I didn’t go), a beauty salon, restaurants; how they do it – and how they survive in business – I don’t know. 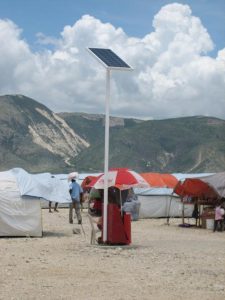 my favourite business here, though, is the mobile phone charger, using a solar panel – plenty of energy there! 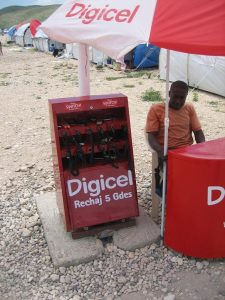 It takes around 3 hours to recharge, but hey, look at the price, 5 Gourdes only, or 12,5 $ct (last time I wrote about this it was 15 Gourdes, in Port-au-Prince, remember?) 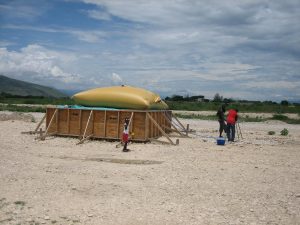 and the water and sanitation facilities, brand-new and working well 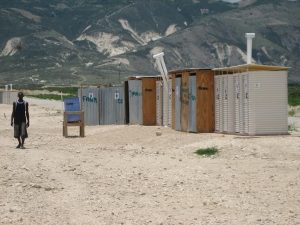 although the first riots have been reported already because the NGO providing this service refuses to pay for latrine and water attendants, they think that should be a voluntary job 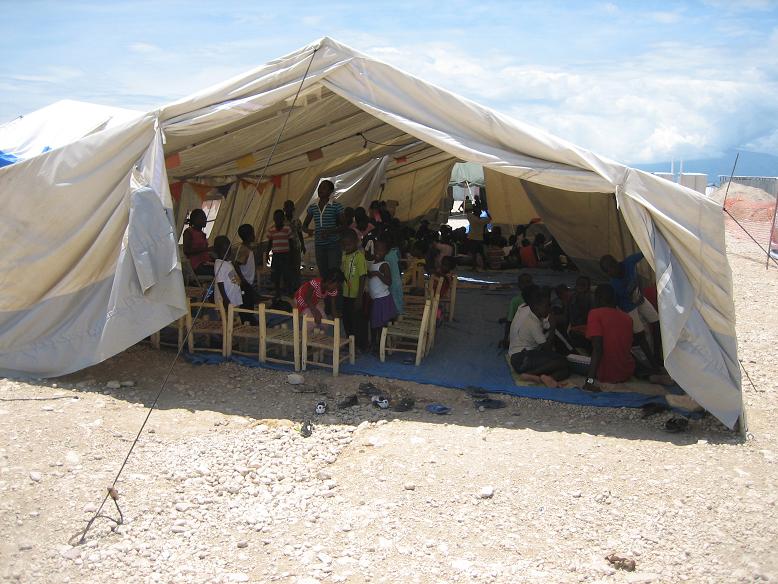 After so much grey camp pictures – never mind the trees – a bit of human touch, our child-friendly space 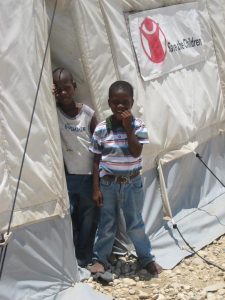 including some of the children 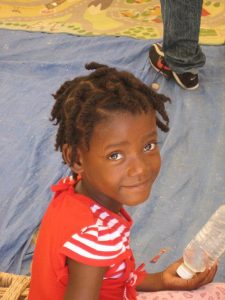 to add a bit of colour to this page. 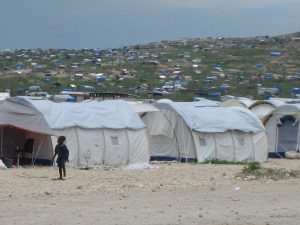 and Camp Obama in the back, quite a contrast with the model camp, right? 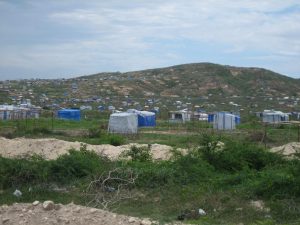 apparently, the squatters come from villages in the neighbourhood, but also from Port-au-Prince and other towns, chasing the opportunity

2 Responses to the model camp