the adventure the band

Yesterday I hinted at the idea to decongest Port-au-Prince. Out of the roughly 10 million population of Haiti, some 2.5 million were living in the capital, before the earthquake, or so say the official statistics. With 200,000 dead, 600,000 who left, and 1.3 million in camps, that doesn’t leave a lot of people in houses, right now, but that is not my point. The key is that Port-au-Prince was heavily overpopulated, and far too big in relation to other areas of the country, and the government is determined to change that in the future.

The ambitious Haitian Rehabilitation and Development Plan, presented by the government at the donor conference end March, calls for significant investment in infrastructure development, like two new international airports, a new harbour and 500 km of new roads. In addition there are plans for six “poles de croissance”, growth poles, in essence existing towns that will be stimulated to grow and thus take on part of the population that was traditionally living in Port-au-Prince. Unfortunately, the plan is very thin on details how to get people into these growth poles, there is a bit of mumbling about economic free zones, business development and the stimulus from the new port and airports, but little concrete recommendations beyond regional strategy planning whilst fitting in the national context. Vague. 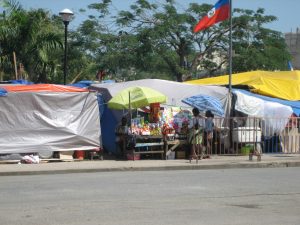 business as usual, except that the business has been moved from the street corner to the camp entrance – but not different from the past

Here is what should be done – a vintage The-World-According-To-Bruno: some 50% of Haitians work in agriculture, and will continue to do so, the vast majority of the rest work in the informal sector, as casual labour, as domestic servants, as very small enterprise entrepreneurs – barbers or tire repair men or whatever super small business -, or as ‘petites marchandes’, market women turning over a small amount of goods, for a tiny little profit. They will do this wherever the opportunity presents itself, in fact Haitians are extremely mobile. A good example is the current camps, where business has developed in no time, stalls have been picked up from street corners and have been brought into the settlements. In short, they will do whatever they do where the people are, who can afford to buy their services.

I reckon that the state is the only stable employer in the country, there are hardly any big businesses, a few banks perhaps, and the telephone companies, in numbers they don’t come close to the civil service. Civil service largely concentrated in Port-au-Prince, of course, thanks to a tendency to centralize whatever can be centralized. So in order to promote decongestion of the capital, what better initiative than devolve power to the provinces, and for instance relocate some of the ministries to the growth poles? Now is the time, many ministries have been totally destroyed in the earthquake, why not build the education ministry in St Marc, and the tax office in Cap Haitien? This brings civil servants to the province, and will automatically attract the casual labour that feeds off these relatively middle class incomes, the shoe polishers and the house boys, the market women and the cooks. No better way to scatter the population then to scatter the livelihood opportunities.

Sadly, it is not going to happen: Haitian politicians have all read their history books, and they know that political rivals have staged coups d’etat and revolutions from strongholds in the province in the past. Better to keep your competitors within eyesight, within Port-au-Prince, where you can more easily out-maneuver them. Better to rebuild these ministries here, just in case you have accidentally appointed a strong minister whose loyalty cannot be trusted, and hope that this decongestion will, somehow, occur spontaneously. Fat chance!

One Response to the decongestion