the beach the report

Just when the atmosphere around the Worldcup started to approach what it had been eight years ago (and probably four years ago, too), with more and more serious expressions of support in the streets, more and more cars decorated in green and yellow or blue and white, more and more people wearing their favourite’s colours on match days, just when expectations were raised and a final between Brazil and Argentina appeared to become a possibility, the country was hit by another tragedy. Brazil lost in the quarter finals!

Two casualties have already been reported, a suicide and a heart attack. 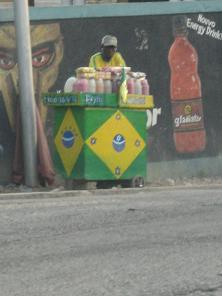 a Fresco cart or a fancy 4-wheel drive, it doesn’t matter, it has been re-painted “Brazilian” – for how long?

A third casualty was narrowly avoided. I was watching the match in our beach resort yesterday, surrounded by around 40 or 50 others, mostly Haitians, all loudly cheering for Brazil, of course. For the first time during the Worldcup, I couldn’t hear the commentators, neither the omnipresent vuvuzela horns. When the first goal was scored, for Brazil, the noise was deafening, everybody jumped up and celebrated. When the second goal was scored, for The Netherlands, I jumped up, to look around, and to find out that I was the only one….. No deafening cheering, in fact, total silence, angry looks. By the time Holland scored another goal they had grudgingly accepted that, because I was Dutch, I had the right to cheer for Holland, but I still thought it prudent to be somewhat less expressive, shall we say. In the end, they let me live, but the loss of Brazil obviously does have a disproportional effect on the Haitian psyche. The country is in mourning.

And today Argentina was also eliminated from the tournament. Not as traumatic as the Brazilian exit, but the Worldcup is well and truly over for Haiti. 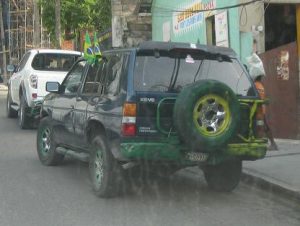 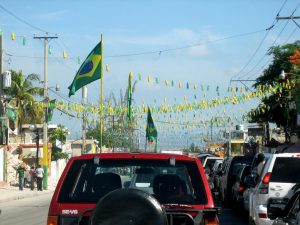 I told you about the plastic bottles, the latest decoration craze. 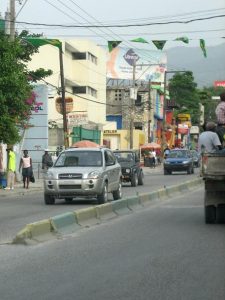 even the division between the lanes on Delmas have been painted green and yellow, although after a few weeks Worldcup, they have faded somewhat – no doubt they will fade further in the days to come, to erase all memory of a failed football year. 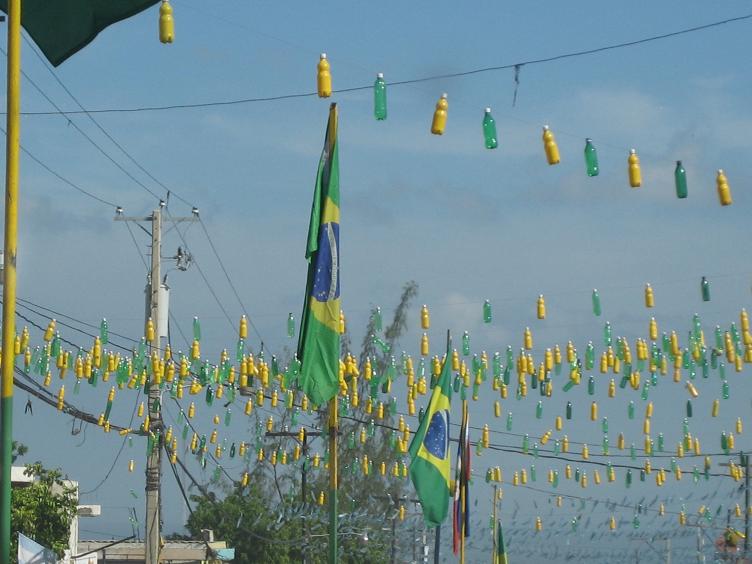 Here a rather explosive expression of support, in Delmas, a major traffic artery