the golfcourse the distribution

Today I was invited for breakfast with the president. Really. Somehow, I have only met one president before, in my life, and that was president Bertrand Aristide, also of Haiti, some 8 or 9 years ago. It was a mixed experience, meeting someone so charismatic, yet frighteningly so. President Preval is a different person altogether.

But first the background. There is lots of discussion in Haiti, especially among government officials, about the role of NGOs – non-governmental organisations, but you already know that acronym, do you? They do not coordinate well, they operate in isolation, they ignore government directives, in short, they need to be brought into the fold. Incidentally, this has been an issue for years, I remember that from my first time here, and it hasn’t gone away; and with so much money flowing into the country, this sentiment has only grown stronger lately. There is something to say for this point of view, but this blog is perhaps not the right forum to discuss this. However, from the NGO perspective, reason enough to go and talk to the president.

So we did, the representatives of the nine biggest NGOs. In fact, we were invited by the president, for a breakfast meeting at 8 am in the palace, or in what is left of the palace. I was picked up from home at 7 am, all dressed up with jacket and tie, for a rendezvous with the other heads of agencies at the back of the palace at 7.30. Security was tight, a big container blocks the entrance to the compound, but we managed to negotiate that one. The second check was from a list of names, and Mr Bruno was good enough to get us into the parking lot – even though it transpired later that Mr Bruno was not on the list. Walking on, we managed to pass the security to the next holding pen, before the real thing, the last level, complete with metal detector. Although, once again, my name was not on the list, I managed to get in assuming someone else’s name: no identity cards here. In fact, control was pretty loose, because when we were standing there waiting for the rest of us to be cleared, a big black rat wriggled itself between our feet, and disappeared inside without having been properly identified, too. Really! 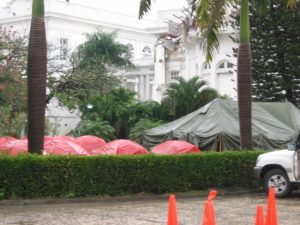 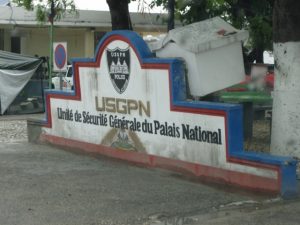 apart from the fact that there is a special security unit 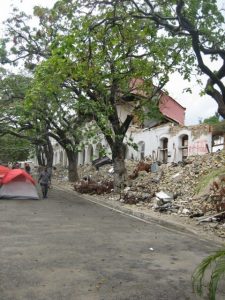 of which, sadly, there is not much left – the remains of the Dessaline barracks

The meeting with the president was a delight. He is a very friendly, fatherly figure, at times making jokes, at times addressing you sternly, but someone you feel very comfortable with. A pat on the arm, a pat on the knee. Sure enough, informal, open-neck shirt… Nothing like my previous experience with a president! Preval was very interested in what we did – genuinely interested -, admitted that he did not know it all, was eager to learn about the way we work within the UN system, was firm but not pressing in making his points, which were all very reasonable. In short, an experience.

Only breakfast turned out to be disappointing: a cup of coffee only. No scrambled eggs, no fruit juice, perhaps we just had misunderstood the arrangements. But it didn’t matter, we had one-and-a-half hours of his undivided attention – apart from the times he had to consult his Blackberry, but hee, which manager doesn’t, these days, let along the manager of a country in distress? – and I think all of us, even the most skeptical, enjoyed the audience. 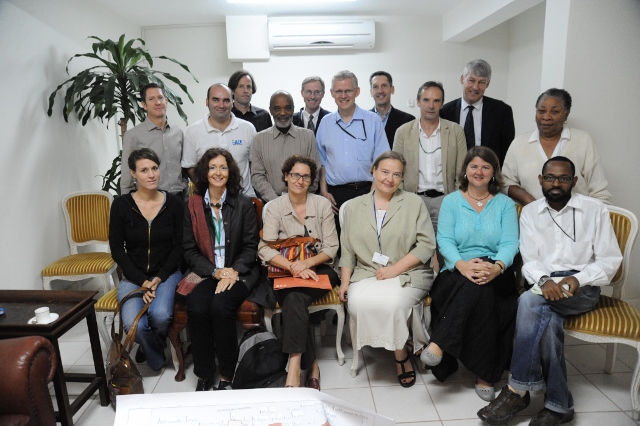 us and the president!

2 Responses to the president