the haircut the president

The Petionville Club was the country club for the Haitian elite. It had some 6 or 7 tennis courts and a nine-hole golf course, but many of its members were not necessarily playing any sports, were just a member to belong, to be part of the in-crowd. There were often parties in the large clubhouse, partly inside and partly on the terrace, and ‘tout-le-monde’ was there, it was the place to be seen. For those who played in was a challenging golf course, with mostly short holes, but hilly, with narrow fairways lined by trees. And even before the earthquake the last hole was already occupied by squatters, so in effect it had become one of the very few eight-hole courses in the world, par 69.

Shortly after the quake the American army started to use the tennis courts for distribution of food and NFIs – non-food items, you ‘ve got to get acquainted with the jargon: this means plastic sheeting, ropes, but also pots and pans, jerrycans, those things that people have lost in the disaster and need to survive. The tennis courts were well suited for this, with high fences around them making access relatively easily controlled. So the golf course, a nice green patch around the corner from the distribution center, became the natural place for an IDP camp (you know by now what IDPs are, right?). And the camp has been growing ever since: official registration numbers suggest between 35-45,000 people live here, but most estimate the true number closer to 80,000. Taking into account the initial status of the 9th hole, that is 10,000 IDPs per hole.

What is going to happen to this camp is anybody’s guess. Where you have so many people together you have to provide services, so somebody has dug latrines and created bathing areas. Others provide drinking water, which is being tankered in daily. Save the Children has set up a clinic, very popular even with people well outside the camp area because of its quality of service – and perhaps also because it is free. But when the rains come, and they will start in the next couple of weeks, all these people’s tents and tarpaulins will be at risk, at risk of being washed away, at risk of being swept by mudslides. No drains, currently being created in anticipation, are going to handle the vast amount of water that is going to come down in one of those violent afternoon storms that I remember so well from 10 years ago. And yet, talking to the people in the camp on one of my recent visits, they seem to have no intention of moving. They are close to their neighbourhood, close to their jobs, close to where their children used to go to school (and hope to do so again when the schools re-open, on 1 April). Nobody knows how this is going to develop. But one thing is sure: this golf course has become a whole lot more challenging!! 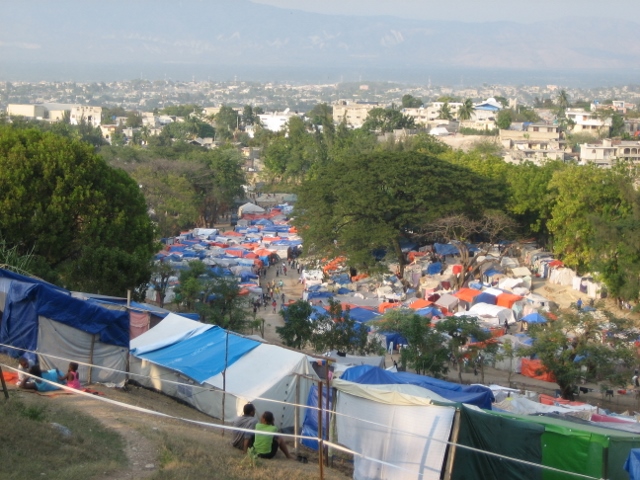 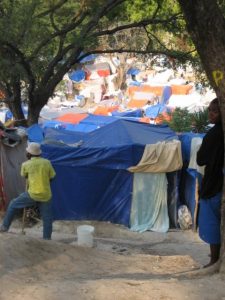 close-up of the second hole, even without tents a challenge 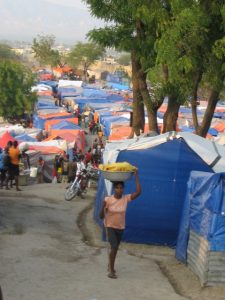 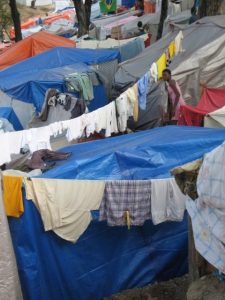 the lady looking for her ball….? 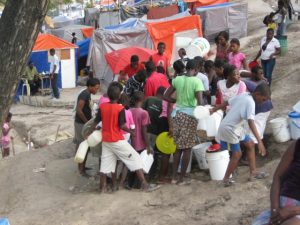 water hazards: I don’t know how many tankers a day are being trucked to the camp to provide drinking water 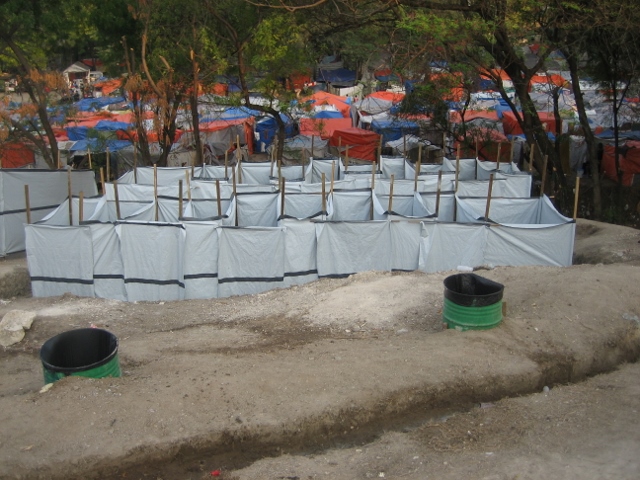 and another water hazard: latrines 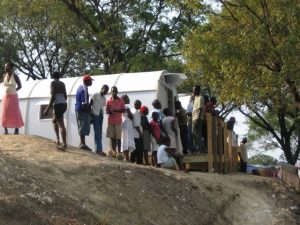 Save the Children clinic, built on the tee of the fifth, with plenty of patients still waiting for services from the two doctors on call, and four nurses. The clinic includes a pharmacy, and there is also a baby tent, providing advise for pregnant women and allowing mothers privacy with breast feeding – no luxury in this overcrowded camp! 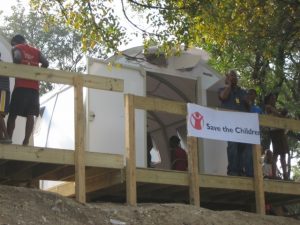 and even the tennis courts are being used, in this case by the American army

One Response to the golfcourse