the worldcup the money

It has been raining a lot, lately, and life in the camps must be miserable right now, more miserable even than before. But something else is happening, too, that makes camp life miserable. There are international standards that determine how much space each individual should have in an IDP camp, they are called the SPHERE standards. In Haiti, and especially in Port-au-Prince, we are nowhere near that standard; tents are side by side, without any room in between. Many camps are unlit. Bathing areas and latrines are separated for men and women, but they are next to each other. You can see where I am going with this: camp security, or rather, insecurity.

Where to start? Some of the camps have been used as refuge for criminals, including some of those who escaped from the Titanic, the high security prison in Port-au-Prince, the day of he earthquake. In an unprecedented action last week some 140 police officers, from the PNH (Police Nationale Haitienne, I don’t have to translate that) and UNPOL, the UN Police Force that assists the PNH, have raided one of the camps near Cite Soleil and arrested no less than 30 ex-prisoners. Cite Soleil itself, the most crime-prone and gang-infested slum in town, is subject to gang violence, with rivaling gangs fighting for territory, and some of these fights spill over into camps. Crime, armed robbery or petty theft, occurs in the camps, fights break out, and rape is all too common, opportunity driven, no doubt.

With well over 1200 camp sites, large and small, in Port-au-Prince, not all have NGO camp management; many have their own camp committees, and sometimes separate security committees. In many cases this works very well, but invariably there are also abuses, camp committee members using their power over food distributions, for instance, to demand favours – all too often sexual favours. Some of these committees are infiltrated, and are not more than extensions of gangs operating in the neighbourhood. The committees, also the good ones, lack equipment, but given Haiti’s history of militia violence, the humanitarian community is understandably reluctant to provide too much support – you wouldn’t want to be associated with creating the next generation of Ton-Ton Macoutes, or the Chimaires of the Aristide era. 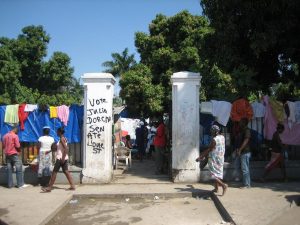 would you want to enter this gate when on patrol? 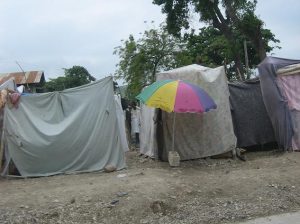 or would you patrol in between these tents at night?

There is a program that brings police in the camps, joint patrols on foot of PNH and UNPOL, either on a continuous basis in some of the larger camps, or on-and-off in others. These patrols, if and when they happen, supposedly inside the camps, where officers can directly interact with IDPs, are well appreciated, and are creating a sense of security amongst camp residents. Unfortunately, this doesn’t always work. Often the PNH is reluctant – afraid, perhaps? – to enter the camps, and prefer to stay at the perimeter only; UNPOL cannot independently patrol, they have to be with PNH staff, so they, too, stay out. At night, with so many tents close to each other, ropes crossing, and no lights, patrols can anyhow not enter the camps, and that is when they are in fact most needed.

Any hope? IDPs feel neglected, so much is certain. Frustration is high, and so is unemployment, and the temptation to revert to crime – not to mention rape – is there. Bored young men are easy targets for gang recruitment. More police may be a temporary solution, but the real need is jobs, to give people something to do, and houses, so that we can close the camps. Unfortunately, these are two of the most difficult, and time consuming commodities to provide. We may be in for a long wait, and for a seriously deteriorating situation before things get better.