the worldcup (2) the photos

After every emergency – humanitarian speak for disaster – there will invariably be the look-back reports, one month on, two months on, three months on, one year on etc. We are busily preparing the six months on, at the moment, collecting facts, photos, case studies, to inform the public and especially the donors about what has happened with their generous gifts. Each and every organisation does its own report, of course, but all will tell very much the same story.

Start with the successes, of course, and there are plenty (at the urging of my wife, I add photos in between, instead of all the way at the end, so keep reading…). Shelter materials like plastic sheeting and other goods have been distributed, probably to almost all who needed them, and quite likely to a few more who didn’t. The spontaneous camps have been provided with latrines, drinking water, garbage disposal; it is amazing that there have not been any serious outbreaks of epidemics, given the squalid living conditions in the camps, and the mud, the stagnant water. Health services in the earthquake affected areas have never been better, with the many new temporary clinics and hospitals that have been set up by NGOs. They provide free primary medical care, as well as nutrition support for the severely and acutely malnourished, breastfeeding support for lactating mothers and prenatal care for pregnant women, services that were not common in Haiti before. They also somewhat undermine the pre-existing system, however dysfunctional, of user fees for public health provisions (and of exorbitant demands for fees from often very poor quality private health care). 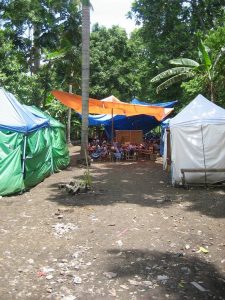 a school yard, cleared from rubble, is being used as transitional school with tents as classrooms, and tarpaulins if there are not enough tents. In fact, many prefer the tarpaulins because the tents tend to become very hot 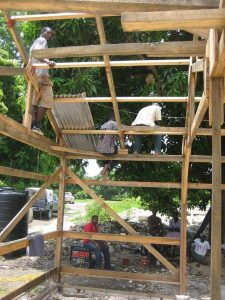 two stages of the construction of a transitional school in Leogane. Once the walls, initially with plastic sheeting, are completed, the structure is what we call semi-permanent, and the school can at a later date improve the building themselves, by adding plywood. Big, concrete two story schools are not very popular, so shortly after the earthquake – they were the ones that did most damage to life. 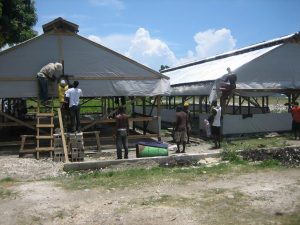 now just with the plastic sheeting

Schools are operating again, mostly out of tents, but a start has been made with building transitional schools. Yet not all children benefit. In Leogane Save the Children works with around 100 schools, which before the earthquake served some 30,000 pupils; last week, we had perhaps 14,000 of them back in the class rooms. Every week it gets a little better, but we are still far away from pre-earthquake enrollment rates. I don’t know exactly why, some children died, obviously, others may have moved away. I fear that many simply have no money to attend the schools, many of which are private institutions. Those who are not back in school yet, will fail this year, despite the adjusted curriculum, and the extension of the school year to August, to make up for lost time after the quake. 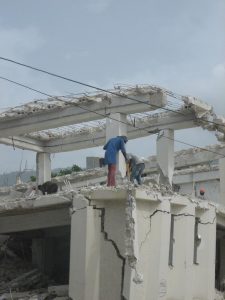 It is extremely tedious work, taking down a house to make space for a new one, or for a transitional shelter; knocking out the concrete to salvage the metal, 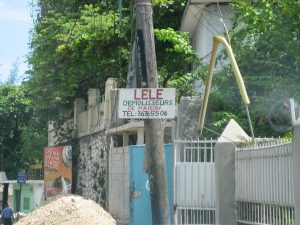 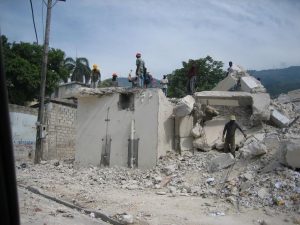 and dump the rubble on the street for future collection

So the economy is perhaps not as booming as I sometimes think it is? Yet everywhere around me small and micro-enterprise activity seems to be mushrooming, markets are busy as ever, camps are teeming with business. Cash-for-Work, I have said it before, provides a steady income for many, at least for a while. The thousands of new and old NGOs offer employment to so many others. Previously non-existent business sectors, like demolition, have taken off, and construction is not far behind. The large amount of money flowing into the country must have a positive economic effect. Having said so, inflation is becoming part of life – no accurate figures are available, but food prices are probably 25-40% higher than before the earthquake.I have commented earlier on the ever-present rubble; yet, visual progress is being made for the alert observer, the mountains of rubble in the streets change, which means that old rubble is being replaced by new – which is good. Demolition is in progress, and some high profile sites as well as many individual plots have been cleared. 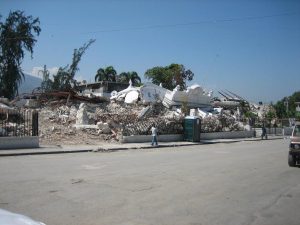 just one illustration of progress in rubble clearing: remember the Palace de Justice, which I showed you in one of my very early contributions (top photo)? 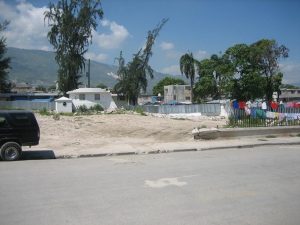 four months later – in fact, this was already the situation one month later, but I took the picture last week, same spot – there is nothing left on the site. Similar progress is being made with other ministries, churches, and even the presidential palace.

It is estimated that some 188,000 houses have been destroyed or badly damaged. Detailed building assessments are in progress, and so far about half of the remaining houses visited by the teams are deemed to be structurally sound, and can be inhabited without danger of imminent collapse at a further aftershock. But there are still some 1.5 mln people living in the camps – or plus or minus a couple of hundred thousand, whatever the real number is. The plan is to build 125,000 transitional shelters by Summer 2011; so far around 3000 have been completed. Poor performance? Six months after the 2004 tsunami only 700 had been constructed in Aceh, so everything is relative.Yet there is a strong sense that progress with clearing the camps is stalling. I have written before about the safer shelter strategy, and the attempts to get people back into their houses, or in proximity sites in their own neighbourhoods, and both haven’t been successful yet. Neither has the plan to encourage people to stay with host families: there are very few ideas on how to make this work, how to incentivize host families without risking immediate eviction after the incentive has been received – not an unthinkable process in Haiti. For the last six weeks or so, the humanitarian community has been working on a settlement strategy which incorporates much more than moving from the camps, and tries to address issues like land tenure, what to do with renters who lost their homes, how to handle IDPs on private land (and the question of compensating land owners rather than evicting IDPs).

Unfortunately, one needs government buy-in for such a strategy; instead of working together with international agencies, the government has now, through the president himself, hijacked the settlement strategy, taken the further development of it in their own hands, and use it for political ends. Thus we now have the Presidential Commission for Resettlement. Their sole objective, for the moment, is to empty the large IDP camp on Champ de Mars in the town centre, highly visible opposite the presidential palace, and relocate the people to a place called Fort National, in one of the dodgier parts of town – a recipe for creating the next slum, the next gang breeding place. This process has now taken well over a month, and there is still very little visible progress in Champ de Mars, and neither is there in any of the other, totally neglected, 1199 camp sites across Port-au-Prince. And we are not even talking about Leogane, Petit Goave or Jacmel yet, equally hard-hit areas or worse, although because these places are smaller and lower profile, there is actually more being achieved here than in the capital.Everybody expects a lot from these six months on-reports. And there is plenty to report on, that is no problem. But however important it is to highlight what has been achieved, I think it is in fact more critical to highlight what an enormous task there is still ahead. And that this can go two ways, we either work all together as hard as we can to make this a success, and then we may, just, succeed in creating a better Haiti, in the long run. Or we keep on frustrating each other, between the government, UN agencies and Haitian and International NGOs, which may create some short-term political gain, but will ultimately wither away some 9.9 bln US$ in donor funds with little to show for in the end. Let’s watch whether we see any of this back in any of the six months on reports.