the recruitment the internationals

A lot of studies have been carried out, related to Haiti and its post-earthquake situation. It is impossible to follow all of it, but one recent study is so interesting and innovative that I do want to share it here.

There has been a lot of talk about the people that, immediately after the earthquake, left Port-au-Prince to stay with family and friends in ‘the province’, the term collectively used for everything outside Port-au-Prince, rural areas, mountains, but also the second and the third largest cities in the country. People left because there was nothing anymore, no food, no water and no house to go back to, whilst the emergency aid came on stream only very slowly. The government loved it – remember their eagerness to decongest Port-au-Prince? – and laid on busses to transport anybody who wanted to get to whichever place they choose, for free. Subsequently the discussion has been initiated about what to do for these people, and for the host families with whom they stay, and who have spent their meager savings on providing food for their unexpected guests – and in all honesty, nobody has yet come up with a credible model to support these host families, but that is another subject, for another day.

In order to develop a response to these indirectly affected areas, as they are called, statistics are important, and soon after the earthquake the first estimates on how many people left the capital, and where to, started to go around. Important to know, of course, if you want to do something for these people. I am not sure what the figures were based on, perhaps on bus tickets distributed, but it now transpires that whatever was estimated may not just have been a little wrong, no, appears to be totally and utterly rubbish. If you believe this new study, that is.

This is what they did: Some guys have analysed the location data of SIM cards from mobile phones from before and after the earthquake, to look at differences in movement of people with Digicel phones – Digicel is one of the biggest operators here. All in all, they claim to have access to two million phones, ie phones for around 20% of the total population. They then just extrapolated the data, and came up with an estimate for population movement, and guess what, it is hugely different from the maps and estimates that have been circulating so far – but probably a lot more reliable! Caveat is that they assume that people with a mobile phone have the same movement pattern as people without a phone, but that doesn’t worry me too much. Fleurissant, my house boy, had a mobile phone well before he had a job.

What does worry me is the implication: somebody seems to be storing movement data of two million people – and who knows how many more? -, and keeps these data for quite a while. Data from after the earthquake can be compared with pre-disaster data, also still available, on a day-by-day basis, in this study up to 19 March. A major disaster does not seem to affect the ability to capture these data, or access them, never mind that the rest of the country is totally wiped out. There is hell of a Big Brother watching us, and not with the intention to map out population movement patterns after an earthquake – which is, however, a very interesting spin off. Below the two maps, the accepted wisdom for long, and the Digicel-based alternative. I have blown up the tables, too, just to show the huge variations by geographical department.

Guess where I want to start the next Save the Children program? See the big circle just east of Port-au-Prince, without any comparable arrow on the old map? That is where I did my reconnaissance trip to Thiotte, the big adventure a few week ago.

Another interesting piece of statistics is that the phone data suggest that some 40% of the people that left, had returned by mid-March; no wonder the camps kept on growing, they had to accommodate another 230,000 people. However, of the people returning, about a third were people that had not previously lived in Port-au-Prince, might this possibly be people looking for work in the devastated capital? So much then for the drive to decongest Port-au-Prince! 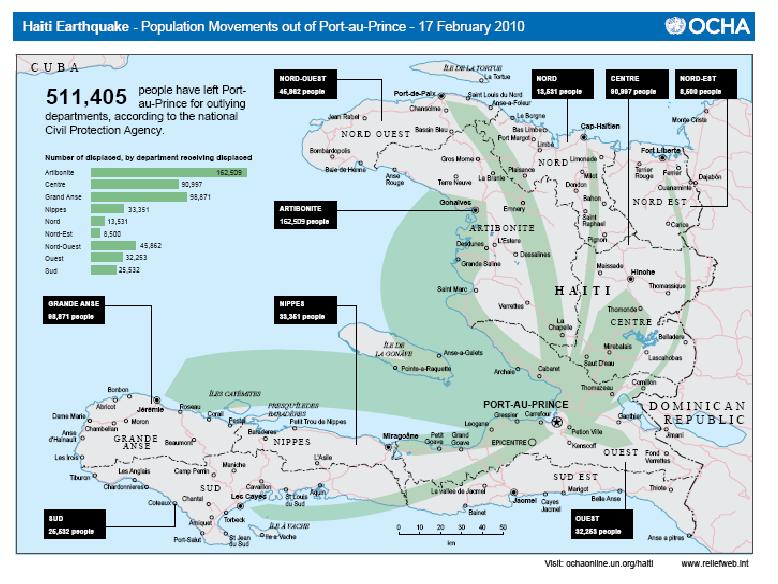 the OCHA map – OCHA is the UN agency for humanitarian assistance, coordinating the disaster response – shows most of the population movement is to Gonaives, in the Artibonite area north of Port-au-Prince, and to Jeremie, in the Grand Anse in the far SW 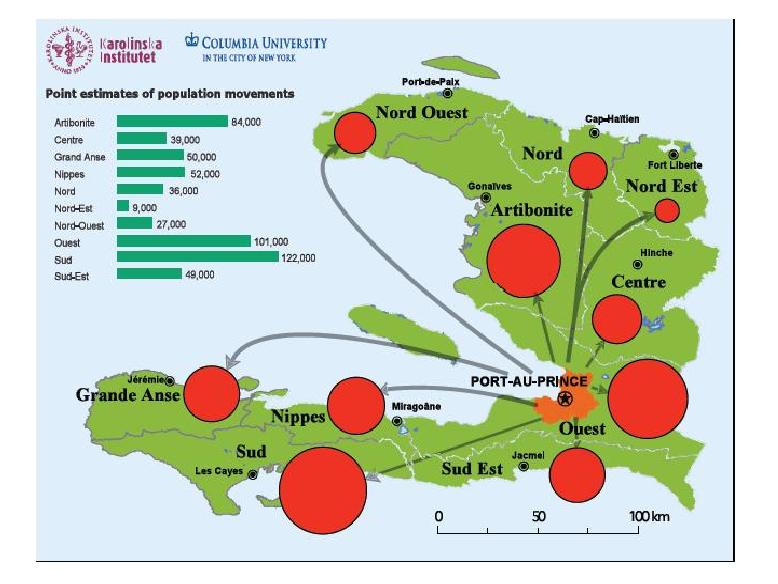 the new map, however, suggests that only half as many went to Gonaives, fewer even to Jeremie, but far more people went to Les Cayes, in the department Sud; and it also shows a large movement towards the east of Port-au-Prince, totally absent on the OCHA map. Our own surveys show that this last area is indeed an area with many IDPs, mostly women and children, whose husbands and fathers have stayed behind in the capital, in search for work 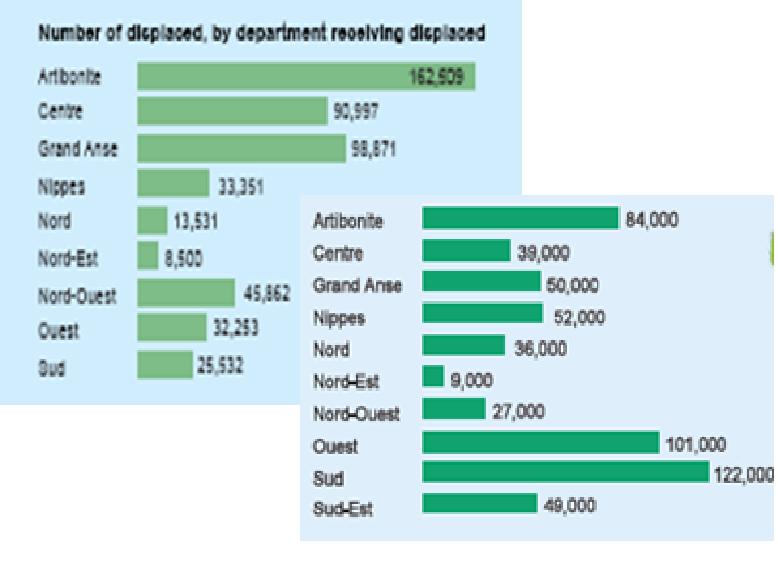 and the figures, per department, compared. They only agree on the North East….. and, funny enough, on the total numbers, 570,000-600,000 had left Port-au-Prince by the end of January – and that is almost a quarter of the population of the city!