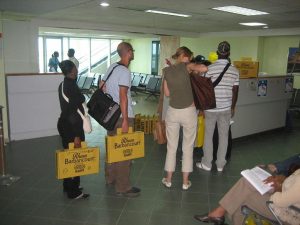 Haiti’s most famous export product, for sure!

Yesterday I got on a plane Port-au-Prince to Paris, and then on to The Netherlands. One way ticket. Leaving Haiti was just as familiar as arriving was, five months ago. Barbancourt rum, Haiti’s most famous export product, is still being sold in the yellow five-bottle packs, which then have to be checked in with the airline!

So this is it, no more contributions to this blog, no more – what did I call it? – random contributions to the better understanding of Haiti in the aftermath of an earthquake. I have to say, though, I have enjoyed blogging; it makes you being alert to things around you so you have something to write about, and it makes you want to take photos to illustrate. Well, sort of, I never got a picture of the rat in our apartment, he was too quick, neither of the intruder in my colleague’s house, let’s say it was too dark. Sometimes I got scared that I would be running out of subject matter, but the reality was that any gap in keeping the blog up to date was related to too much work, rather than lack of inspiration.

I had expected to write for family and friends, but I have the feeling that I had a somewhat wider audience at times (whilst many friends and family no doubt never read the blog: in April I got an email from one hoping that I had safely returned from my Haiti adventure). I suspect that quite a few of my colleagues were reading some of it, and I know for sure that total strangers have been to the site, too. One of my colleagues in Westport, where Save the Children US has its head office, commented on my haircut – can’t be coincidence! -, and the CEO of the Dutch office referred to my blog on the visit, the one that he had been part of, too! Right, so much for anonymity, being one website in millions. However, I have to admit that I have since adjusted my approach a bit, and written less on Save the Children and more on Haiti – probably a change for the better, who wants to hear about my work frustrations, anyhow?

What else had I expected? A more lively comments section, perhaps? Even when I wrote that I was taking a specific paragraph off-line I had no angry reactions, nobody protested. Or maybe nobody really read anything I wrote, that is another possibility, of course! In any case, it was fun doing – and there wasn’t a whole lot else to do, in my spare time. Perhaps I find something else to write about, sometime later. For friends and family, mostly.

One Response to the end