the clearing the insecurity

It was bound to come up: the Worldcup. We are talking about football, as in the game played with your foot, soccer thus.

I have been in Haiti before, during a Worldcup, so I was prepared. A country normally divided, between black and mulatto, between very poor and very rich, even between north and south, and certainly between government supporters and opposition, forgets all these differences for four weeks, and becomes divided… between supporting Brazil and Argentina. Slightly more than 50% of the population supports Brazil, slightly less that 50% Argentina, the rest doesn’t really matter. Political demonstrations – we had quite a few in the past few weeks, invariably small and not gathering popular support, demanding for Preval to resign and Aristide to come back, and one group is even demonstrating to bring back Jean Claude Duvalier, better known in his time as Baby Doc -, political demonstrations have all but died down, and instead there was a demonstration, a real big one, and growing throughout, in front of EDH, Electricite d’Haiti, the local power company. To demand electricity during the Worldcup!

Haiti’s own Worldcup fame is restricted to the 1974 tournament, when they – briefly – led against Italy, Emmanuel Sannon, Manno for his friends and fans, scoring against the legendary Dino Zoff (make no mistake, Manno is locally just as, if not more legendary, still, even though he died two years ago). They went on to loose 3-1, and their next two games, and exit, never to return again. 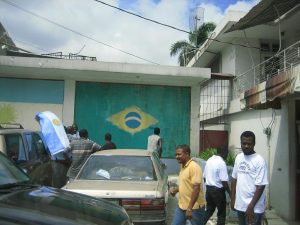 preparations are underway to create a Worldcup watch corner in Petionville, equally popular with Brazil and Argentina fans 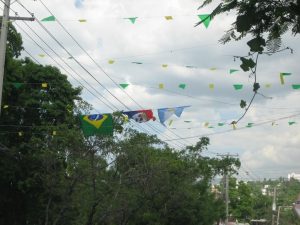 streets decorated with flags, large and small; another way of decorating is with painted plastic bottle, painted in blue and white or green and yellow, obviously, must have been an enormous task. I will try to get a picture of this, too 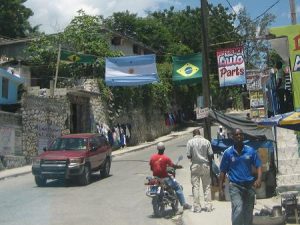 more flags, here Argenitian and Brazilian brotherly next to each other, a rare sight! 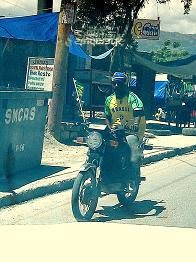 apologies for the poor quality photo, but you get the idea: shirt, headscarf and matching flags 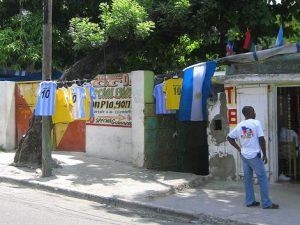 and the merchandise, somehow shirts nr 10 are the most popular, whichever country

So they support somebody else, and what better then to choose a potential winner. The country changes beyond recognition. Flags appear on cars, and across the streets. The newest thing is plastic bottles, painted in the favourite’s colours. Walls are decorated in either green and yellow or white and blue, football shirts and other merchandise becomes widely available, and finds plenty customers. Just a shirt won’t do, you have to have a couple of flags and a headscarf, at least. During the matches it is markedly quieter in the streets – that’s when we do our errands, now, much more time-efficient. People are huddled around small television screens, in kiosks around the town, or in the camps – no large screens, like eight years ago. My earlier suggestion to put screens in the neighbourhoods, so that people would return to their houses, has not found much support, but putting screens in the camps would create yet another pull factor, so small scale TVs is the best we can hope for, this year around. Those who have no TV listen to the radio, which for 2 times 45 minutes produces a continuous stream of names of players who touch the ball, in Creole, occasionally interrupted by “Gooooooooaaaal”, and more often by advertising messages, read out by the same reporters in the same monotonous voice.

Enthusiasm knows no boundaries: yesterday after Brazil’s narrow 2-1 win – against emerging football giant North Korea, of all contenders! – the celebrations went on until late at night (the matched finished mid afternoon, local time). Those included small arms fire and the use of semi-automatic guns for an uncomfortably long time, and the burning of I don’t know what, probably – hopefully – rubbish and not cars. And this was only the first match of Brazil, nothing has been decided yet. But hey, it doesn’t happen every year! 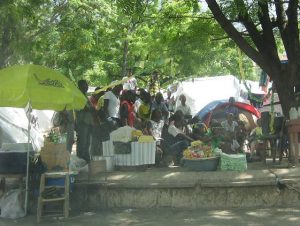 huddled around a small television in the camps 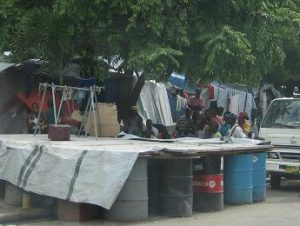 by the way, the fact that the camps are mostly blue and white is unrelated to the football rivalry…. more to do with prevalent colour of plastic sheeting

Still, the atmosphere, despite all the flags and all the shooting, is less abundant than eight years ago. People have other concerns, not just the Worldcup, they are preoccupied with the coming hurricane season, and their own feeble existence in camps. Perhaps that is a good thing, however much we all grant them the entertainment – more serious business is at hand for most.