the economy the rubble

It has started to rain during the day, occasionally. And the rains during the night have become heavier, with thunder and lightning. The rainy season is slowly creeping upon us. I have indicated several times already that this is going to be another disaster, especially for the people in the camps. In fact, there is a strategy to get people out of the current camps. Firstly, encourage people to return to their existing homes – if they still exist. It is estimated that perhaps some 50% of houses are actually OK, but people are reluctant to return to their homes because they are scared, and because they get all sorts of goodies if they stay in the camps (but you cannot stop distributing in the camps, because we don’t know who needs the support, and who doesn’t). For the remainder of the people, clear the rubble from their plots and erect a transitional shelter – a structure that can withstand the elements for 18-24 months -, or built small transitional shelter colonies in people’s neighbourhoods. Only for those who have no other option, the plan is to relocate to larger transitional shelter camps outside town, mostly to the north, where land is still available. This is a story in itself, maybe for a later date.

What is important now is that it has started to rain, harder and more frequently. Cash-for-work crews are busy clearing drains, which in the best of times were already clogged up, and are now even fuller, with rubble and lots of other post-emergency traces – Styrofoam boxes and plastic bottles, I have pointed that out before. Whether this is going to sort any effect? We’ll see. Most Haitians do not seem to be bothered too much by the prospect of rain, and have not shown yet any initiative to move out of the many unsustainable camps that exist right now, whether on the slopes of the Petionville Club or in muddy football pitches and parks. The biggest concern when it rains is still the hair. The hair? Right, in one way or another Haitian women find the time – and the money – to do something with their hair every few days, obviously very important. Molly, our cook, will have a different hair style every other day, almost. And thus are the streets, when it rains, full of women with shower caps on their heads, or just plastic bags, anything to keep the hair dry. It would be really terrible if they would have to get back to the hair dresser once again, now, wouldn’t it? And I agree! 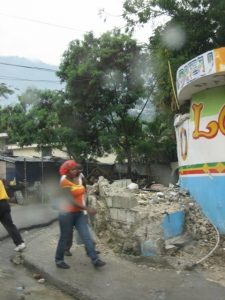 photos, once again, not very good, partly because of the rain, of course, but it illustrates what I just said above: protect the hair! 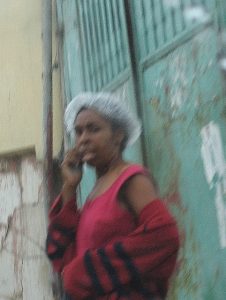 and again, protect the hair!

4 Responses to the rain