colourful addition to the streets of Veliko Tarnovo

An old capital town with a lot of atmosphere, and Bulgaria’s most revered fortress

One of the curious things about Bulgaria is that it is full of former capital cities. Every major event in Bulgarian history seems to have called for a new capital. The First Bulgarian Empire was established in the 7th Century, after Bulgar tribes, most likely with a Central Asian nomadic background, landed somehow in the area west of the Black Sea, and the first Khans settled in a place called Pliska, near present-day Shuman in NE Bulgaria. From here they expanded their territory to include most of southeastern Europe, battling Byzantium in the meantime. Over time, the Byzantines proved stronger than the Bulgarians, forcing them to relocate their capitals to Preslav, and later to Ohrid, deep in present-day Macedonia, until Bulgaria was finally beaten and incorporated in the Byzantium in 1018.

However, with Byzantine power in decline, a Second Bulgarian Empire was established in 1185, which had Veliko Tarnovo as its capital. There had been a fortress here since Roman times, perhaps even earlier, and it is easy to see why. The Tsarevets hilltop sports a commanding view over the Yantra River – in itself not a particularly important river, I think, that connects with the Danube. With the increasing success of the Empire, Veliko Tarnovo, or Tarnovgrad, as it may have been called at the time, grew ever more important, according to some Bulgarian sources even rivaling Constantinople. Right! 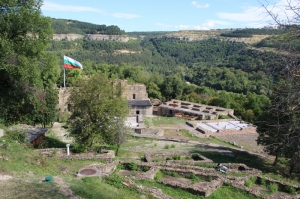 what is left of the Fortress, restored or rebuilt

It doesn’t now, anymore – rivaling Constantinople. In fact, it was destroyed by the Ottomans, in 1393, and that was the end of Veliko Tarnovo as a capital city. Yet, it is alive and kicking again, now home to Bulgaria’s prime university, and it is a nice place to spend a few days, located as it is in the mountains, somewhat cooler than at the Black Sea Coast. 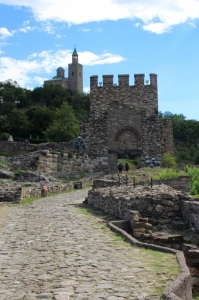 entrance to the Tsarevets Fortress 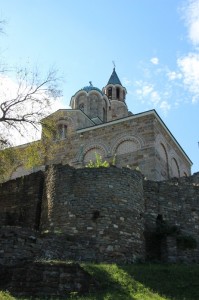 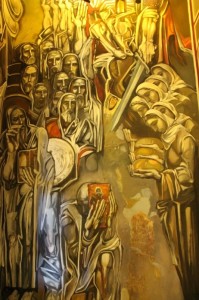 one of the strikingly modern frescos in the Patriarch’s Church 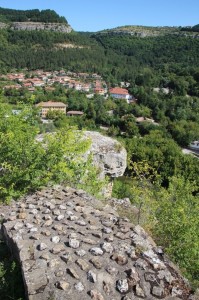 The main tourist attraction – mainly Bulgarian tourists, once again – is the Tsaravets fortress, which has been restored. Well, “restored” is a big word. Apart from the Patriarch’s Complex, a cathedral reconstructed in 1981 and, for a change, painted with strikingly modern frescos inside, instead of the usual effort to recreate the traditional Orthodox fresco style, there is little to recognize. Apparently, the fortress contains the remains of 400 houses, 22 churches, 4 monasteries and a royal palace, but to the uninitiated eye it only contains ruins, and so here and there an obviously recently build tower or wall. But the hilltop is a nice-enough area to stroll around for a while, trees providing shadow and the fortress walls providing striking views of the surrounding mountains and the town below. Just be careful not fall off Execution Rock, indeed, the place where people, in olden times, were executed by being pushed over the edge. 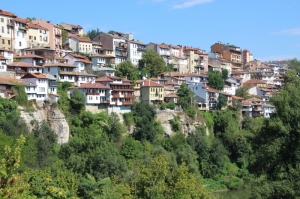 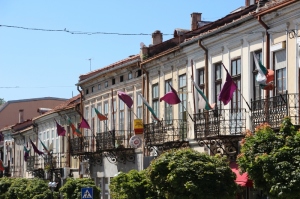 row of houses in the main street of Veliko Tarnovo 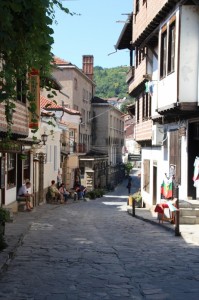 cobbled street in the old town 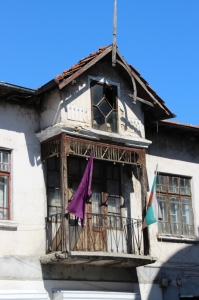 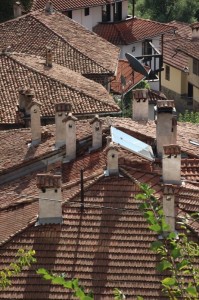 roofs and chimneys, solar panels and a satelite dish 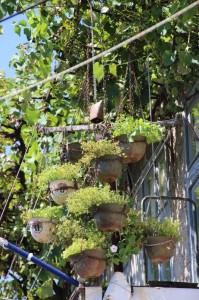 flower pots with a twist: these are inverted helmets!

In fact, the real gem is the town itself. Built against the steep river valley, Veliko Tarnovo is a green city, lots of small parks, and lots of trees along the roads, big and small. The old part of town is a pleasure to explore, for a few hours; wandering through narrow cobbled streets, lined with white-and-wooden houses, with balconies overgrown with grapevines; turning onto stairs uphill, and discovering hidden court yards, and small churches; and being surprised at times by the sweeping views across the river valley, of vertically stacked houses or most horrendous monuments. 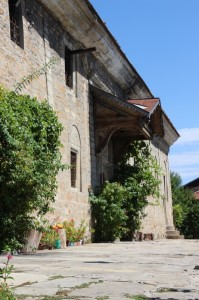 the Saint Nicolas Church, outside 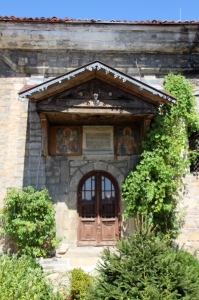 unused entrance to the church 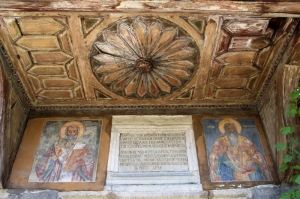 just to get an idea, these are outside frescos above the entrance

The one place that won’t let itself illustrate by photos, is the Saint Nicolas church, a hidden treasure in the higher regions – geographically speaking – of Veliko Tarnovo, which we stumbled upon whilst deviating from the official, Tourist Information-prescribed walking tour. A rather small church, built in 1836, this is a most amazing place: on the one hand as original and authentic as they come, with a fabulous iconostasis – a delicately wood-carved screen with many, different-size icons painted inside -, several antique chandeliers, dark frescoed walls and ceiling, a beautifully curved balcony for the choir, carpets on the floor, wooden seating along the side, and on the other hand pragmatic, with cheap-looking metal heaters, complete with metal-pipe chimneys, for the winter, and electric aircos installed in the windows, for the summer. I would have loved to take pictures, but the grumpy caretaker, an stern unsmiling woman, wouldn’t let me. And when she realized that I was making notes, and was going to write about this little gem, she was even more offended. “No photos, no writing!”. The last thing she wanted, is to have any more tourists visiting the place then the two of us.

And perhaps she is right. Tourists would definitely erode the unique authenticity of this little church.

Next: we explore the towns around Veliko Tarnovo 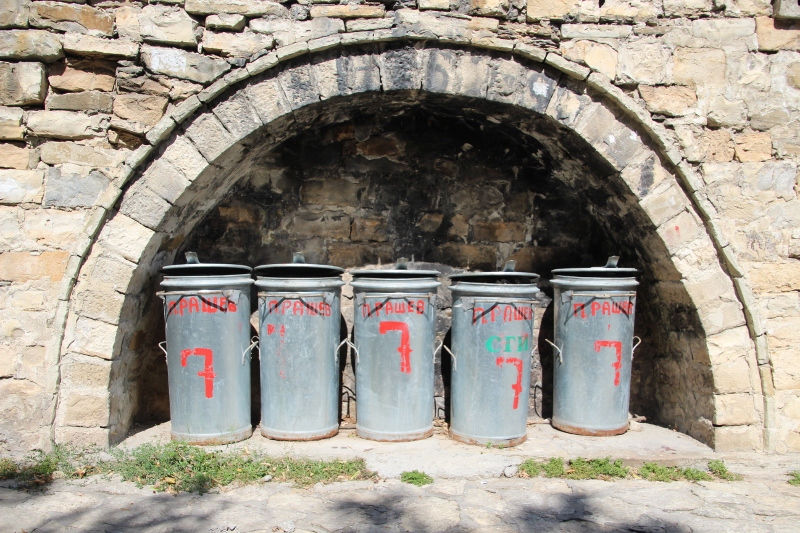