view of the mountains, along the road up 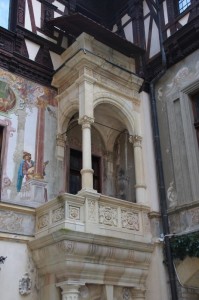 a balcony in the courtyard of the Pelas Palace in Siniai, at the foor of the Bucegi Mountains

Lovely Sinaia, with its houses and palaces, contrasts sharply with the rugged Bucegi Mountains which tower above it 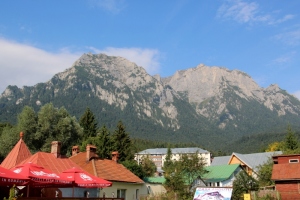 A short way away from Brasov are the Bucegi Mountains, rising to about 2500 meters, and perhaps – or at least as far as we have observed – one of the most beautiful parts of Romania. From the road to Sinaia, the main town here, the steep, craggy mountain sides rise imposingly, almost vertically; which makes Sinaia’s position as prime ski resort in winter, and hiking base in summer, unchallenged, at the base of a cable car up. Obviously, the town has been at it for a while, not only demonstrated by the many exquisite turn-of-the-century houses, but also by Peles Palace at the high end of town, the summer residence built for King Carol I, which took some 40 years to complete. 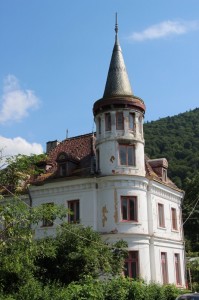 one of the houses in Siniai 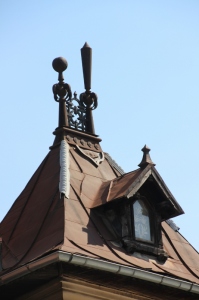 a roof; note the cute couple of man and wife 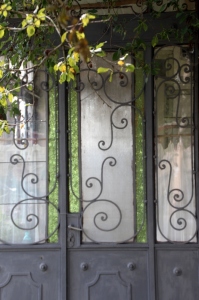 a decorated metal door of one of the Siniai houses 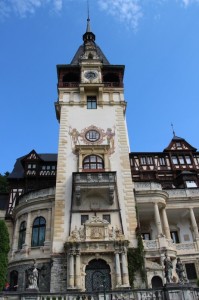 the tower of the Pelas Palace 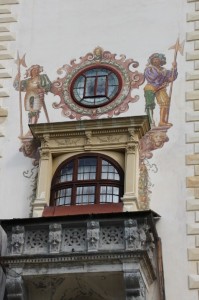 outside wall decorations on the tower 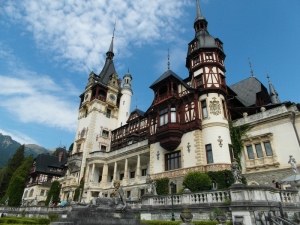 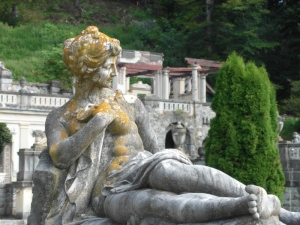 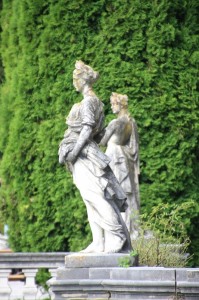 sculptures in the palace garden 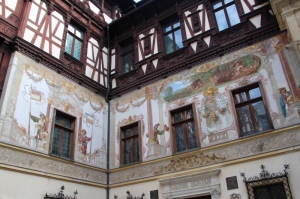 the walls on the inner courtyard, decorated

The Palace is what one would expect a palace to look like. Huge, imposing, yet tastefully built, tastefully decorated with sculptures in terraced gardens. As with Bran Castle, Peles Palace is firmly on the tourist trail, to the extent that the queue waiting to get in – on the mandatory group tour – was too long for us to be bothered. In any case, the day was spectacular, and the mountains were beckoning.

The tourist information office gave us a walking map of the area, and emphasized that the shortest hike would take about nine hours, if we didn’t plan to stay overnight in any of the cabins – which we didn’t. Nine hours, that is about two full rounds of golf. The face of the tourist office staffer suggested that he thought this would be a little too much for us, apparently he didn’t think we would be that fit (neither did we). He stressed that quite a few people didn’t make it back in time, and got stuck in the mountains, to further discourage us. It already being halfway the morning, we abandoned our hiking plan, and started looking for roads up, instead. 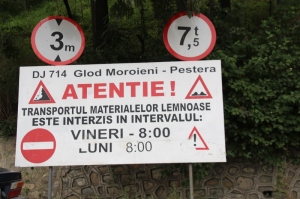 OK, by now we have learned that one is not allowed to transport wood materials from Friday to Monday, but would’t you interpret this as “no entry, under no circumstances”?

Which we found, together with a big sign that looked to suggest that entering the road, into the Bucegi Mountains National Park, was in fact strictly forbidden. Whilst we were contemplating whether to respect the law, or perhaps play the naïve, innocent and stupid foreigner – a role that suits us well if necessary – , we saw another car coming down. Probably a forestry official? Strange, on a Saturday, but showing commitment, so much was clear. And then more cars appeared, both coming down, and going up. Quite a few forest officials? Hmmm. Unlikely. So, if every local ignores the no-entry sign, would we, naïve and innocent foreigners, obey? To cut a long story short, at the end of the road, high up in the mountains, hundreds of Romanians were parked, using the road as a starting point for hiking – and, no doubt, significantly cutting down on the minimum of nine hours -, or just to set up a table and chairs, and have a picnic, or even a barbeque – despite the signs all around not to light a fire, and despite signs warning for bears. 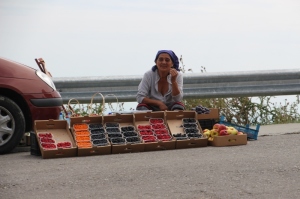 woman selling fruit along the road into the Bucegi Mountains 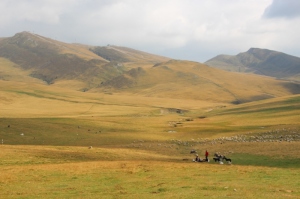 another spectacular view; these are sheperds, not hikers, I think 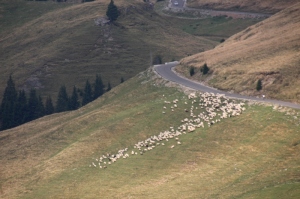 sheep getting off the road

Somewhere along the road, away from the hundreds of parked cars, we climbed to the top of a hill, to have our own picnic, with an even more gorgeous 360o view than our last Bulgarian picnic experience. Given the many sheep, all around us on various mountain slopes, we reckoned that the bears would ignore us, and that in fact the sheppard’s dogs would be a much greater threat, but that they would in turn fall prey to the wolves. Or something like that. 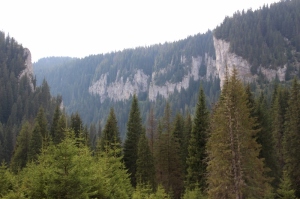 the mountains near Moroieni where no tourists come

On the way back, not wanting to backtrack, we found another road, in much poorer condition, and clearly a lot less popular with the Romanian day trippers, which took us a lot longer to get down, with a lot more anxiety, not about breaking the law, but more to do with where in Heaven’s name this road would end up. It did, finally, in a village called Moroeni, a strikingly poor village, less than 30 minutes from affluent Sinaia. Obviously, we don’t understand the ins and outs of Romanian society, yet. But we do as the locals do!

Next: the Saxon villages, back in Transylvania 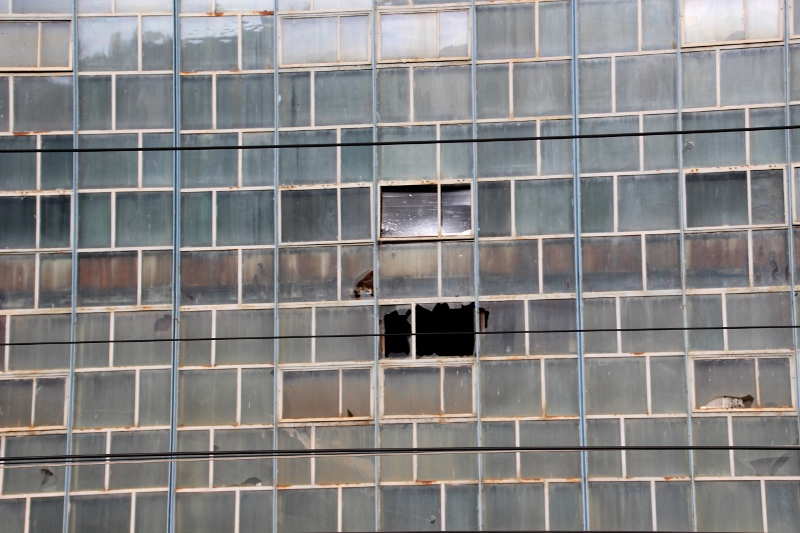 I just have to, whenever I see them: show you another abondoned factory, near Siniai