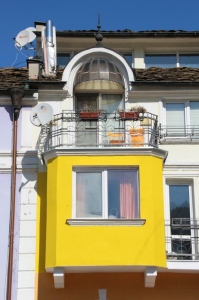 parts of Lovech, near Veliko Tarnovo, are very colourful

Several towns in the Balkan Mountains around Veliko Ranovo have their own attractions, of a widely varying nature 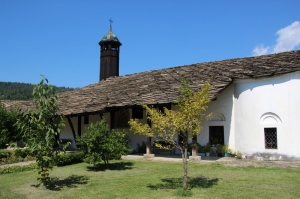 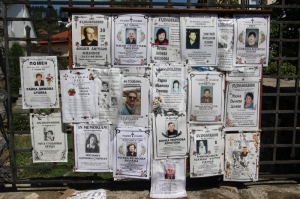 an interesting Bulgarian practice: posters of the deceased next to the church 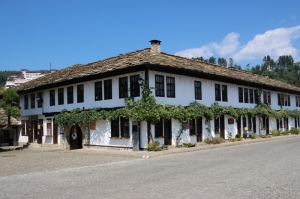 National Revival on its best

To the south is Tryavna, a small town with a great collection of what is termed National Revival houses, from the time that Bulgarians started to develop feelings of nationalism again, after centuries of Ottoman occupation. At the beginning of the 19th Century this National Revival was joined by economic prosperity, and rich Bulgarian merchants started to build large private houses. 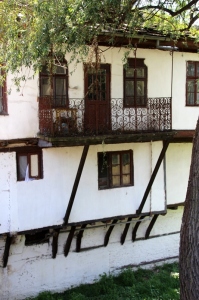 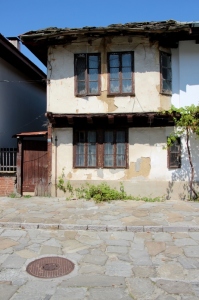 but not all houses have had their latest revival

Over the years, many of these houses have fallen in disrepair, but thanks to lots of European Union money, restoration is underway, and Tryavna clearly has been on the beneficiary end of this. And the patching up has been done tastefully, retaining a feeling of authenticity not necessarily always respected with restorations of this kind. The houses, mostly white-stuccoed, contain lots of wood finishing, in balconies, doors and windows, very nice. Beside the houses, the town has a fine little church, with fabulous wood-carved iconostasis inside – where taking pictures is forbidden, unfortunately -, a clock tower, and cobbled streets and bridges. Lovely for an hour or two strolling around. 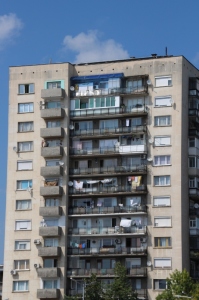 example of a tall palati in Gabrovo 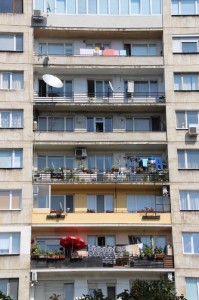 Close to Tryavna is Gabrovo, also a nice town with tourist attractions like National Revival houses, a church in the same style, and cobbled streets. Apparently, this town is also an internationally renowned capital of humour and satire: there is even a House of Humour. We should have explored this further, of course, especially because humour has, so far, not been something we would immediately associate with Bulgarians, but we didn’t, due to lack of time. What we did see, however, was an impressive collection of what we used to call palatis, years ago, when we lived in Albania: efficiently constructed half-high apartment buildings, probably one- or two-room only apartments, no more than five or six floors, so that there was no need for an expensive elevator. Some are higher, presumably with a lift, and presumably even cheaper on a per unit basis. All across the former east-bloc you will find these constructions, but Gabrovo had a particularly good selection of them. Which is kind of funny, too, no? 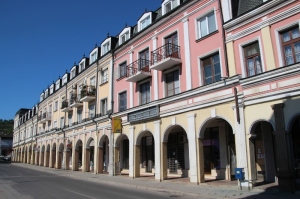 To the west of Veliko Tarnovo is Lovech, like Gabrovo and Tryavna a town that first prospered during the Second Bulgarian Empire, and later revived, so to speak, with Bulgarian nationalism and the struggle against the Ottoman oppressor. Lovech particularly so, because it was the headquarters of the Revolutionary Organisation, led by Vasil Levski, the closest Bulgaria has to a national hero. Levski was a revolutionary who wanted to liberate Bulgaria from Ottoman rule, and worked to create a national movement and establish guerilla-type units, often with the help of the monasteries. Unfortunately, he was captured and hanged by the Turks in 1873, just a few years before independence was achieved – this, no doubt, has helped to advance his hero-status. Which is, in turn, now being exploited by Lovech, which is breathing Vasil Levski around every corner, with a museum, and with a massive statue high above town. 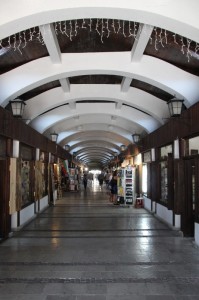 inside the covered wooden bridge 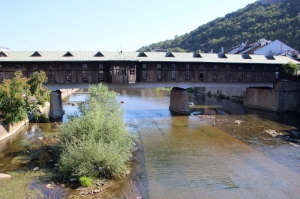 the covered wooden bridge, unique in this part of the world

The statue is next to an old fortress, which used to be a nice, unpretentious affair, but is now comprehensively being messed up by European Union funds to achieve the ugliest possible restoration. Complete waste of time: brand-new tiles have been laid in the ruins of a church, fortress walls have been rebuild with new stones, and everywhere lights are being installed along newly-created walking paths in between the remnants of the castle not yet rebuilt. Luckily, the rest of Lovech is very nice, with cobbled streets and well-restored National Revival houses in the old town, late 19th/early 20th Century houses in what is called the new town, and a covered wooden bridge connecting the two. Once again, an excellent place for a few hours strolling around.

What nobody ever tells you, of course, is that strolling around in those lovely cobbled streets, whether in Tryavna, Gabrovo or Lovech, is a particularly nasty attack on the soles of your feet, a very rough form of reflexology. Painful!

Next: the museum village Koprivshtitsa, equally painful on the soles 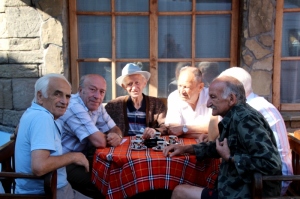 group of Lovech residents on a terrace 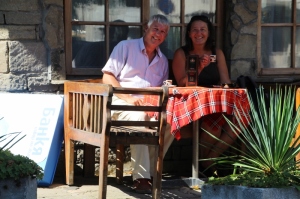 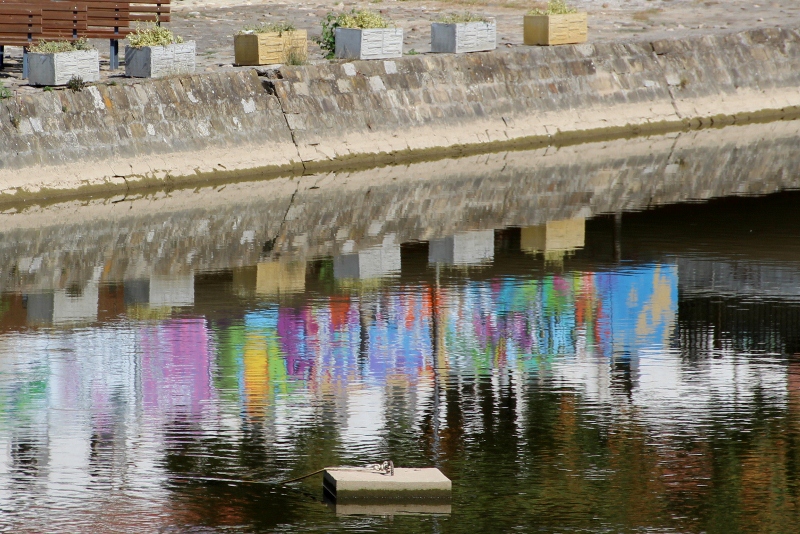 graffiti art in Lovech, reflected in the river