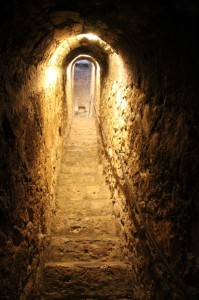 a bit of a Dracula Castle comes with a secret passage; this is in Bran Castle

The Carpathian Mountains contain several castles, in various states of (dis-)repair, and many of them tenuously linked to Vlad the Impaler, better known as Dracula

Sooner or later, I will have to bring up the imaginary Dracula, creation of Bram Stoker, and the character he was supposedly modeled on, the Romanian voivode (a kind of prince) Vlad III, better known by his nickname Vlad Tepes – which is Romanian for  Vlad the Impaler. Vlad III was the son of Vlad Dracul, which may have meant Vlad the Devil, or perhaps Vlad the Dragon – in any case, the son of Dracul is called Dracula.

The Romanian attitude to this 15th Century warlord – this is what the Wallachian and Moldavian voivodes or princes were, just warlords who tried to expand their influence, power and wealth all the time; the notion that they were collectively fighting the Ottoman enemy with any other goal than defending their own territory and interest is nonsense. Anyhow, the Romanian attitude to Vlad the Impaler, who achieved Europe-wide fame from his excessive cruelty, culminating in impaling 20,000 Turkish prisoners of war – long before the Geneva Convention, admittedly (let me know if I need to explain the process of impaling). Anyhow, the Romanian attitude to Vlad the Impaler is an ambiguous one. On the one hand Romanian historians are at pains to point out that other European rulers were cruel, too, at the time – never mind that none of them ever got a reputation anywhere close to that of Vlad -, on the other hand they shamelessly exploit his fame. In Sighisoara, where the man was born, and lived until he was four, there is a Dracula House (and several restaurants of the same name). In Danes, a Saxon village in Transylvania, a wine has been called after him, Danes Dracula. Brasov, Targovista – where he lived for a while -, and many more places have in one way or another a link with Vlad, which is being emphasized. 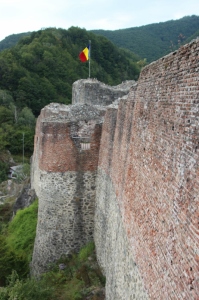 the remnants of Poienari Fortress 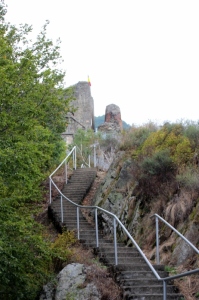 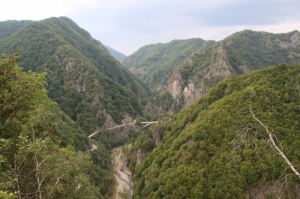 the view towards the Fagaras Mountains, from Pienari Fortress

In the Carpathian Mountains, which cut right through – present-day – Romania, there are many castles, and most of them with some or another link to Vlad, to boost their tourist potential. Too many for us to all visit. But we went to see Poienari Fortress, allegedly the real Vlad Castle, the one he occupied for a long time as his residence, although from time to time he was forced to flee, from Ottoman Turks or from other war lords – after all, going trough life impaling, beheading and hanging others for the smallest infringement, or imagined infringement, or just for fun, doesn’t make you popular. There is not much left of the Fortress, which is mostly of note for its views from the top of the steep mountain on which it is located, and from the 1480 steps it takes along the concrete stairs, to reach it. Bran Castle, just on the other side of the Carpathians, is a whole different story, firstly because we are talking real castle here, with crenulated walls, towers, secret stairways, elegant rooms, your prototype castle as you would imagine it. Secondly, because the link to Vlad is a rather tenuous one, at the most: apparently he stayed here for a few days, as the guest of the then inhabitant – who is way less famous, of course. Yet, these few days were enough to install a real torture room in the castle, but also for Bram Stoker to – perhaps – use this castle as his model for Dracula’s dwellings, in his novel. 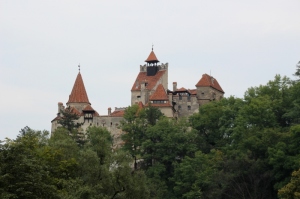 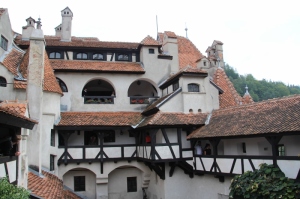 on the inside, equally impressive 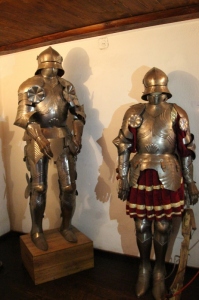 Sofia dressed in red skirt, and I am the one on top of the wooden box

Because the steps to Bran Castle are far fewer than those to Poienari Fortress, and there is much more to see, too, Bran Castle has been universally adopted as THE castle. Which attracts the tourists, not just the Romanian tourists, not just the loud-speaking Spanish groups, but everybody, from everywhere. Which, in turn, attracts the souvenir sellers, the menus in four languages with photos, the rude waiters on the many terraces, the whole touristy thing. Which we weren’t used to, anymore!

Next: to Transylvania, first Brasov